You can use WP menu builder to build menus
Home » Features and Interviews » Interview: Nick Lane on ‘Sherlock Holmes: The Sign of Four’ 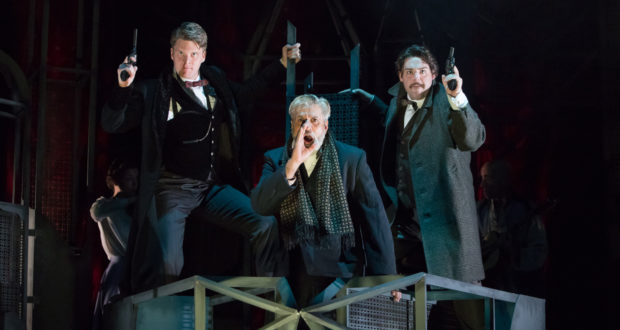 Interview: Nick Lane on ‘Sherlock Holmes: The Sign of Four’

Author: Everything Theatre in Features and Interviews 7 January 2019 0 270 Views

Blackeyed Theatre is currently touring the UK with a thrilling new adaptation of The Sign of Four, Sir Arthur Conan Doyle’s epic second Sherlock Holmes novel. Crammed full of adventure, romance, comedy and, of course, one or two rather brilliant deductions, this faithful adaptation combines original live music and ensemble storytelling as Sherlock Holmes and his companion Dr Watson use their powers of deception to solve the mysterious disappearance to Mary Morstan’s father. Liz Lowe spoke to playwright Nick Lane about the process of adapting a classic and his take on the iconic detective.

Tell us about The Sign of Four and how you came to be involved in this exciting project?
It’s a rattling good yarn and that’s what we’ve tried to focus on in this adaptation. As for my involvement, that came about following a conversation with Adrian McDougall, the Artistic Director of Blackeyed Theatre. I’d adapted The Strange Case of Dr. Jekyll & Mr. Hyde for Blackeyed last year and it went pretty well, so Adrian and I looked at a list of books and chose that one. It was as simple as that really.

What were the key elements of The Sign of Four that you wanted the play to highlight?
I think you have to start with the main characters. That relationship between Holmes and Watson; the interplay, the friendship – I wanted the adaptation to reflect that as I saw it. Then it’s really about doing justice to the plot. Crime fiction tends to be a lot of reported action: the witnesses are all talking about the things they saw. It’s all happened already, and unless you find a way to get past that, you run the risk of losing something that’s really important to Holmes: the excitement he feels at challenging himself, pitting his wits against anything that comes his way. That excitement is definitely something I wanted to point up.

I thought I had a good idea of who Sherlock Holmes was but realised, on reading The Sign of Four, that my impression was largely based on pastiche versions I’d seen. How would you describe your Sherlock?
There are a lot of pastiches out there, aren’t there? Don’t get me wrong; a lot of them are great, but we didn’t want to do that with our version, for a variety of reasons. There’s also a theory I found recently online that suggests that Holmes is either a high-functioning autistic savant or that he suffers from Asperger’s. It’s an interesting idea, but for me it’s his genius that separates him from others; his social awkwardness deriving from the fact that he’s always several steps ahead of everyone else and therefore struggles to make connections. The Holmes we’ve created can be just as mischievous and humorous as he’s drawn in Doyle’s stories – with poor long-suffering Watson as his foil – and yet there are moments of irascibility and, I suppose, sadness, both of which come from his towering intellect.

Reading the novel, I became aware of how much so many TV detectives owe to Sherlock Holmes. I thought particularly of Inspector Morse – another cultured loner who hides his emotions well – but there are many more. What do you see as the legacy of Conan Doyle’s stories and what makes the characters and adventures of Holmes and Watson endure?
You have to say that the template for all that followed in the procedural crime thriller genre was set by Doyle with Holmes and Watson. Morse is a great example of what came after; Colin Dexter would be flattered by the comparison I feel sure. Before that, of course, you’ve got the great detectives created by Agatha Christie; there’s Lord Peter Wimsey, the Dorothy L. Sayers character; Georges Simenon’s Maigret – the list is exhaustive, and they all come back to Holmes and Watson to a greater or lesser degree. TV detectives too, whether adapted from novels or original creations.

For me, it’s the intricacy of the plotting and the wonderful characters that will always make Doyle’s characters stand out. His legacy is the structure of the crime novel, which can and has been played with but will endure, as well as the creation of a really strong crime solving partnership. No Holmes and Watson, no buddy cop movies!

The novel was written in a different era, when habitual recreational drug use was more socially acceptable (in fact the novel begins and ends with Holmes casually reaching for the cocaine) and comments/attitudes that today would be considered racist were commonplace. How did you approach these aspects of the text when adapting the work for a modern audience?
Great question! I mean, you’re absolutely right; Doyle was writing in a different time for a specific readership – socio-political changes have rendered, for example, the drug use taboo and the attitudes towards the Indian characters questionable at best. Now, you can read the novel and nod and say, ‘Yes, well, his work served predominantly white British male readers, probably people of means at a time when only they could vote. We also still considered ourselves an Empire at the time so I guess it’s natural – of course he’s going to write in that way.’ It’s certainly an argument; writers from the Ancient Greeks through Shakespeare right up to the present day shape their work to suit their audience.

For me, however, when it came to the part of the novel set in India, I couldn’t leave that alone. The drug use, for anyone that’s read or studied Holmes, is very much a part of his character, so I left that as written – [it’s] easier that way; it leaves any judgement on the character for the audience to make. The other part… I mean, we know so much more now about the British treatment of the Indian people during the time of our occupation, and because the latter part of the novel takes place there I didn’t want to portray the Indian characters as written (as either servants or thieves). Difficult to go into what I did exactly without digging into the plot, but suffice it to say that I’d have felt more than uncomfortable casting any Indian or Asian actor in roles that did not at least offer some redress – and some dimension to their character. Naturally the original novel has to be served, and the plot cannot suddenly become a vehicle for any revisionist agenda to a huge extent. That said, I think I might have offered a more enlightened take on the final section of the plot. That doesn’t give too much away, does it?

Could you briefly give some insight as to the format of the play and whether you use a narrator or if the majority of the play is straight action?
Well, it follows a format that I’m certain isn’t original – Watson addressing the audience as the narrator of the piece, as he is in all the Holmes stories. The company play a variety of parts – as well as playing a number of musical instruments. They’re a terrific cast; we’ve been so lucky. The majority of the play is indeed straight action. You’d not get Holmes’ voice otherwise, and you absolutely need that!

Blackeyed Theatre’s Sherlock Holmes: The Sign of Four is currently on tour throughout the UK, with upcoming London dates at Greenwich Theatre from 7-11 May.