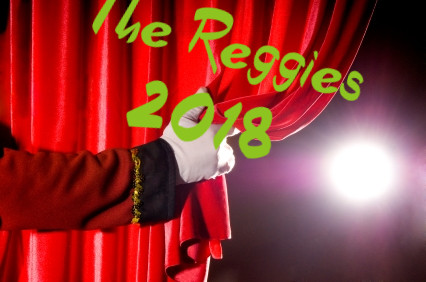 RETURN OF THE REGGIES (Part 2)

Best play is the blue ribbon award for the Reggies; the genre that originally gave the fringe its profile. In third place is Wipers Times at the Arts Theatre. Co-written by Ian Hislop, the play is a glorious mix of comedy, pathos and drama as the human cost of war is laid bare. In second place, Tiny Dynamite at the Old Red Lion. A play from the pen of Abi Morgan does exactly what it says on the tin. A compelling study of emotional fragility holds the attention with ease. But the winner is Tennessee Williams’ Summer and Smoke at the Almeida Theatre. A superb production that positively drips with atmosphere is currently enjoying a limited run at the Duke of York Theatre.

Another new category: best set design/special effects. You wouldn’t imagine the fringe could offer much in the way of elaborate visuals, but I’ve noticed a marked shift towards more creative design; a notable achievement where space is so limited in small venues. In third place, Tiny Dynamite (again!) at the Old Red Lion; an excellent set was fashioned to create series of waterfall effects which created a memorable almost ethereal soundtrack.  Runner-up is The Woods at the Royal Court Theatre. The Jerwood provided a stunning backdrop with the smart use of light and sound forming a unique landscape on a mainly black set. The clear winner  emerged at the Almeida Theatre’s production of Machinal. A set with neon lit shutter screens and mirrors enabling 360 degree views totally eclipsed the play.

There are currently seven William Shakespeare plays running in London, a number which doesn’t include the numerous adaptations or plays inspired by the Bard. At any given time, there will be a number of Shakespeare plays to choose from. So it’s only right we have a separate category we’ll simply call Dear Old Will; at number three, Macbeth at the Rose Playhouse. Yes I know, gloves and blanket at the ready but this timeless story of power and ambition will keep you warm. At number two it’s Othello at the Globe Theatre. Where better to watch a Shakespeare play, especially one marshalled by the genial Mark Rylance as Iago. The final number one on this year’s countdown goes to Julius Caesar at the Bridge Theatre. A mind-blowingly brilliant production led by David Morrissey, Ben Wishaw, David Calder and Michelle Fairley. It was a privilege to witness such an event, and exit the theatre to a fully illuminated Tower Bridge afterwards.

As 2018 closes London theatre is in the rudest of health, providing a valuable source of income for the economy. But as the country heads toward a political and economic abyss, we should all be concerned for our future prospects. Whatever the outcome, Everything Theatre will still be here to give its readers the lowdown in what’s hot (and what’s not) in London theatre.  Wishing you a happy, peaceful new year.

Previous: RETURN OF THE REGGIES (Part 1)
Next: Interview: Nick Lane on ‘Sherlock Holmes: The Sign of Four’