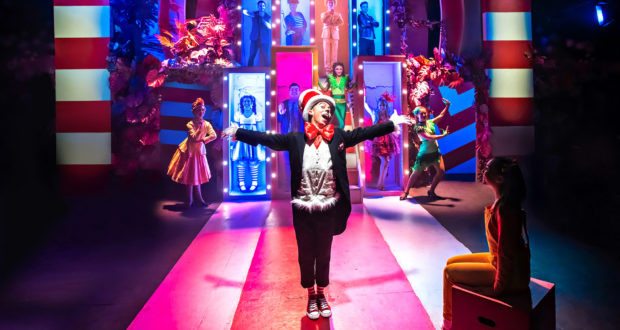 'Seussical the Musical' at Southwark Playhouse (Photo by Adam Trigg)

Oh the thinks London audiences can think this holiday season, as Immersion Theatre Company brings Seussical the Musical to the Southwark Playhouse stage. Inspired by Dr. Seuss’ Horton Hears a Who and other stories, Seussical tells the tale of a gentle elephant trying to save a tiny world, the one-feather-tailed bird vying for his attention – and the Cat in the Hat at the heart of it all. Before performances began, we caught up with director James Tobias to learn more about the whimsical musical and his passion for family theatre.

Though audiences are only being treated to it now, this production of Seussical has been years in the making for Tobias, who says the musical has been ‘on my bucket list for 15 years’.

‘I saw a college production back when I was in college, and straight away I adored it,’ Tobias says. ‘And ever since then, I’ve always wanted to do it, so I’m so thrilled to finally have the chance to.’

Featuring music by Lynn Ahrens and Stephen Flaherty, Seussical initially debuted on Broadway in 2000, where it had a short run of only six months. But Broadway was just the beginning for the family-friendly musical, which has gone on to have a robust life in amateur and regional theatre and become one of the most-performed shows in America. Tobias attributes the show’s unexpected popularity to the show’s music, which he describes as ‘sensational’, as well as the musical’s enduring themes.

‘The messages are still so painfully relevant today as they were when [the show debuted],’ Tobias says. ‘We’re talking about body insecurity, we’re talking about the feeling of being isolated, of not having anybody to turn to, mental health. And I think at the moment, these are such important subjects to kind of address, and I think Seussical does that in a really fun but intelligent and sensitive way.’

Productions of the show may be plentiful, but Tobias promises there will be a few things making his production stand apart. The director explains that he and his collaborators ‘have come up with what I hope are some really original and unique ideas, which I don’t believe have been done before.’

Parents bringing their children to the show shouldn’t be worried about their little ones’ attention spans, as the musical is being presented in its “Theatre for Young Audiences” form. The full-length musical has been condensed into 75 minutes – taking all the ‘best bits’ from the full-length version, Tobias says – to make the show more manageable for younger audiences.

But the show’s fanciful subject matter and shortened form doesn’t mean older theatregoers should stay away. ‘Though it’s a theatre for young audiences version, that is simply down to the fact that it’s been condensed into one act to make it more manageable for young audiences,’ Tobias says. ‘It’s not that the content of the show has changed.’

Though Seussical may be for all ages, Tobias’ career as a director has had a particular emphasis on presenting theatre for younger audiences. Tobias and Rochelle Parry’s Immersion Theatre Company, which was first founded in 2010, specifically focuses on family theatre, including original musicals and pantomime.

‘[Immersion] started off doing a lot of drama … but then we moved into touring, and as performers, we had done a lot of family theatre, and I felt that it was something that really resonated with me and something that I really wanted Immersion to explore further,’ Tobias explains. ‘And from the moment we started producing family theatre I found it so rewarding, I was like, “This is my calling, this is what I want Immersion to focus on.” And Rochelle felt the same way.’

When creating theatre for young audiences, Tobias notes that his directorial approach doesn’t actually change from how he would direct adult-oriented work, pointing out that ‘children are a lot more switched on than they’re often given credit for’.

‘I still require the cast to give the same level of truth, to still create the show that has the same level of integrity, heart, substance,’ Tobias says. ‘I don’t patronize our family audiences, just because they’re younger doesn’t mean they don’t understand.’

‘Rather than just watering the messages down or just kind of simplifying the performances, I still very much tell my cast [to] play the truth of it or treat it as if you were doing a serious piece of drama,’ Tobias adds. ‘Even with Seussical, which is fun and it’s larger than life and it’s lively, you know, if a character is feeling a certain way – feel that way. Play the truth of it. And I think for that reason, my approach doesn’t really change. It’s always about creating a truthful performance.’

Tobias does, however realise the particular impact that theatre can have on children, whom the director notes are the ‘audiences of tomorrow’.

‘Every time we do a show, because of the work that we produce, there will be at least one, if not more, child in the audience who’s – this is going to be their first theatrical experience,’ Tobias says. ‘It’s such an honour, it’s a privilege and it’s a huge responsibility. With kids, if you don’t hook that child on the first experience they have with theatre, you could potentially put them off theatre for the rest of their life.’

Whilst he hopes that children seeing his production of Seussical will be bitten by the theatre bug, Tobias promises that no matter what, audiences of all ages are sure to at least have a fun time at the big-hearted show.

‘I hope that [audiences] leave feeling happy and inspired by what they’ve seen, because at the end of the day, even though it does address these really pertinent issues, it’s just such a fun show,’ Tobias says. ‘The characters are larger than life, it’s wacky, it’s touching, it’s moving, and so I think they will leave having seen a really fun, inspiring piece of theatre, which I think is much needed in these times.’

Seussical the Musical is currently playing at Southwark Playhouse through 29 December.