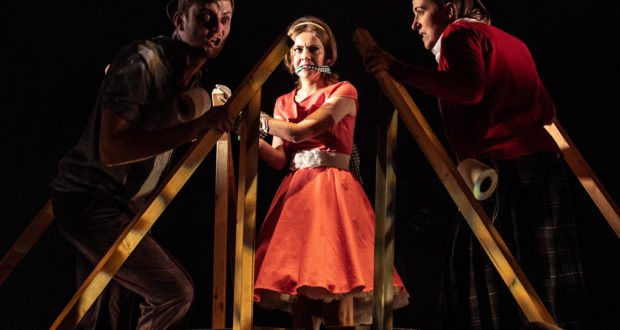 Pros: A talented and tuneful cast making the most of a limited performance area.

Pros: A talented and tuneful cast making the most of a limited performance area. Cons: A low key Act I suffers in comparison with a sparkling Act II which emits a genuine West End feel. Urinetown is hardly the most obvious title for a musical, but its purpose soon becomes apparent as an antidote to the sugar coated fayre common to the genre. The show made its debut off Broadway in 2001 and went on to win two Tonies and a healthy West End run in 2014. The Bridewell Theatre still feels a bit like a library, but does&hellip;

Although the political sub text is lost, it works well as a musical, with songs that grow stronger as the show progresses.

User Rating: Be the first one !
Urinetown is hardly the most obvious title for a musical, but its purpose soon becomes apparent as an antidote to the sugar coated fayre common to the genre. The show made its debut off Broadway in 2001 and went on to win two Tonies and a healthy West End run in 2014. The Bridewell Theatre still feels a bit like a library, but does boast a compact and well equipped performance area. The audience for this show is seated on two sides of the stage, which means the cast have to work within a tight space, moving four gantries into position.

The story tells of a twenty year drought which has caused a major water shortage. This has made private toilets unusable and forced the masses to use public conveniences for a fee. The pay to pee policy is strictly enforced to control water consumption. Those who fail to follow the rules are sent a penal colony called Urinetown. But the oppressed are ready to revolt at the poorest urinal in town, run by Penelope Pennywise and assisted by the popular Bobby Strong.

The plot makes a reasonable stab at satire as faceless bureaucrats wield power without any responsibility. And yes, every aspect of our lives is taxed, as George Harrison pointed out in the brilliant Taxman (‘if you try to sit I’ll tax your seat…if you take a walk I’ll tax your feet’). But this basic truth is buried in a light comedy with songs. Cast members wear toilet rolls like the latest fashion accessory and try not to groan at the most obvious gags. It’s not necessarily a problem, but the intended message could have been stronger.

Act I seems to build very slowly and feels subdued, even though it features two of the show’s strongest songs (Look at the Sky and Follow your Heart). However, the show really stretches out and finds its feet in Act II, with some rousing set pieces and complex choreography in the tightest of performance areas. A cast of 22 is huge for a fringe production, but they perform admirably, especially Joe McWilliam as Bobby Strong and Miranda Evans as Hope Caldwell; who is curiously styled like Alice through the looking glass (a subliminal message that may in retrospect have passed me by?).

Overall, it is a tight, well marshalled production that gets the best from a talented cast. They are note perfect on the ensemble pieces and highly effective as a company. However, the musical as a creative endeavour raises many questions. The promised satire never really emerges from the traditional froth of a musical. There is also an imbalance between the two acts, as the second instalment seems to eclipse all that came before; a kind of fringe Act I followed by a West End Act II. Overall it is a pleasing performance, but without the edge I was expecting.

Previous: Interview: Clifford Samuel on ‘A Guide for the Homesick’
Next: Rats at Etcetera Theatre – Review