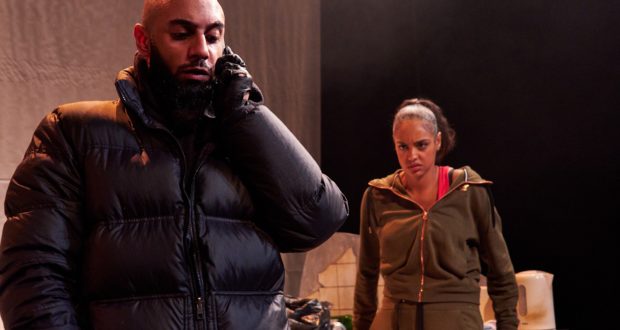 Pro’s: A well-constructed and honest look at gangs, drugs and the complete lack of hope for many in the care system.

Con’s:  With the subject matter, this really is hard viewing at times, as it should be.

Pro’s: A well-constructed and honest look at gangs, drugs and the complete lack of hope for many in the care system. Con’s:  With the subject matter, this really is hard viewing at times, as it should be. There has recently been a lot of talk of County lines; the moving around of young vulnerable adults to deal drugs in different areas. They are usually care leavers, groomed into the life having been through the social services system and churned out the other end as another statistic.  POT may not directly mention county lines, but you do imagine that writer&hellip;

POT is Heaven Can Wait set on an inner city council estate. It’s bleak, desolate, and full of abject hopelessness. It’s also essential viewing for anyone who cares.

There has recently been a lot of talk of County lines; the moving around of young vulnerable adults to deal drugs in different areas. They are usually care leavers, groomed into the life having been through the social services system and churned out the other end as another statistic.  POT may not directly mention county lines, but you do imagine that writer Ambreen Razia had something similar in mind when she first started putting pen to paper.

Because that is the starting point for POT.  Louisa (Sophia Leonie) has spent the best part of her 17 years on earth in that system, being passed from one foster family to another. As her case files says, clever girl, but disruptive. And as Miles (Gamba Cole), the person she finds herself locked up with in the safe house tells her, she is certainly committed to things, having been stopped 67 times trying to find her biological mother.  Having left care, she is now running drugs for Josh (Wahab Sheikh, who must one day be cast as a demented Hollywood villain).  She thinks she is his girlfriend, but again Miles sums it up for her bluntly, “this wasn’t love, it was recruitment.” After all, the previous night it appears Josh was sleeping with another of his gang of young adults who all gather round him like a moth to light, undoubtedly craving the attention and bond that the group share with each other, something that has probably been missing throughout their young lives.

POT is one long, and at times harrowing and bleak, 80 minute scene.  And what starts as bleak only gets bleaker as the tension grows, as the truth is revealed and as Josh reappears, more manic every time.   Louisa and Miles are alone in the dingy tower block flat, the type of place where everyone knows everyone else’s business, the type of place most of us would never set foot in let alone want to live, basically any tower block on any inner city estate. They are locked in as they wait for Josh to return. It’s soon obvious they are hiding, scared, and soon enough we discover it’s because Louisa was responsible for the six hour torture of the girlfriend of Josh’s local rival, Mark, who runs the drug business on the neighbouring patch. And Mark wants revenge, which is why everyone is at their wits ends, desperate to find a way to appease Mark. It’s just that without Louisa knowing it, Josh may have got there first, and when she finds out she isn’t going to be happy.

With such a bleak premise, POT could easily be unwatchable. The reason it isn’t is because of the incredible writing of Ambreen Razia in crafting this into a thriller, almost a classic edge of seat whodunit, although for a long time we’re not even sure who the actual victim is, more of a “whogotit”.  There is reveal after reveal; firstly you’re trying to put your finger on why the opening half is all a little strange in places. Then you’re trying to work out who the victim is that has clearly been seriously injured outside the tower block, and of course then you are left desperate to piece together who did the deed.  And as each secret is revealed, each is an absolute gut punch.

POT works both as a thriller and as an amazing piece of social commentary.  It tackles a topic all too easily brushed under the carpet, and for that it deserves applause. And that applause should be louder for the fact it is also playing at schools to get its message across.