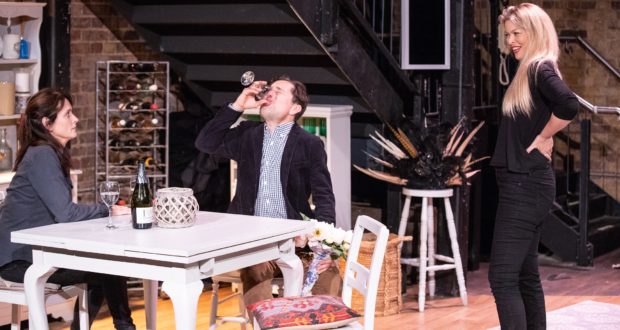 Pros: A 15 minute interval that lets you mentally prepare for the fact that there’s a second half.

Pros: A 15 minute interval that lets you mentally prepare for the fact that there’s a second half. Cons: Shockingly bad and self-absorbed dialogues, lack of dramatism, cheap reactionary propaganda. When you hear that there’s a new play written by Julie Burchill, you obviously run to see it. She’s one of the wittiest and funniest living British journalists, even if you happen to disagree with pretty much everything she says or writes about when it comes to politics. Refreshingly unapologetic about her working-class background and self-defined “militant feminist”, she’s just unique. Hence the shocking disappointment with which I left&hellip;

A poorly written play that presents bigotry where it could have showcased valid arguments.

User Rating: Be the first one !
When you hear that there’s a new play written by Julie Burchill, you obviously run to see it. She’s one of the wittiest and funniest living British journalists, even if you happen to disagree with pretty much everything she says or writes about when it comes to politics. Refreshingly unapologetic about her working-class background and self-defined “militant feminist”, she’s just unique.

Hence the shocking disappointment with which I left the theatre after seeing People Like Us. Although I’m very aware of the high expectations with which I headed into Southwark that evening, no one had prepared me for such a disaster.

The plot concerns five London friends who have a book club. It is just as wanky and pretentious as you might expect. They have been running it for years quite successfully, sharing books and countless bottles of wine. The group meets at Ralph’s (Kamaal Hussain), an Oxbridge writer who, in a typical middle-age male crisis, recently left wife and kids for Clemence (Marine Andre), a French woman considerably younger than him. They are joined by close friend Stacey (Gemma-Germaine), gay northerner Frances (Sarah Toogood), and happy-go-lucky Will (Paul Giddings).

This particular meeting of the book club takes place just before the Brexit referendum. Ralph, Clemence and Will are remainers, Stacey and Frances leavers, but Ralph forbids the members from talking politics during the meeting. Instead, there is lots of pompous talk around Patricia Highsmith’s The Talented Mr Ripley. Stacey suggests Michel Houellebecq’s controversial book Submission for the next reunion. Referendum takes place. Friends are not friends anymore. Something like that.

It’s not only that the argument of the play is without rhyme or reason; the dialogues are ludicrous, self-absorbed, boring and lack any dramatism or basic entertainment. I can only imagine Julie and Jane (writer Jane Robins, co-author of the play) having a wild night at the pub playing Cards Against Humanity and deciding to put their conversation in writing.

What could have been a positive attempt to showcase the perfectly valid arguments of all those who voted leave not on xenophobic or reactionary Johnson-UKIP-EDL grounds but as a rebellious protest against the British and European establishments, backfires in the most pathetic way. It’s pathetic because there’s no insight in the anti-immigration arguments presented by the characters, and because it’s overrun by surreptitious English nationalism of the most despicable kind.

On one hand, Stacey and Frances celebrate the unexpected result of the referendum as a victory of the working class, an in-your-face kick to the contemptuous city liberals. On the other, Stacey gives the most condescending and sentimental speech about “three little Muslim girls” going to school all dressed in white “like angels” – these poor oppressed Islamic children. Obviously her neighbourhood is riddled with mosques too. Frances adds how uncomfortable she feels in the swimming pool with Muslim men around. It’s so cheap and ludicrous (they even say, not tongue in cheek, “EU superstate”) that it makes you wonder if Burchill and Robins are taking the piss.

If that wasn’t enough, the part about “sex” (the subtitle is “A play about sex and Brexit”) is conspicuous by its absence, which makes me think that it was just a marketing strategy to attract more pervy curious audiences to see the show.

When a play is so dismal, the acting and staging take a very secondary place. And yet in this play the performances are awkward enough to make you wish the play was shorter or at least the interval longer, to brace yourself for the second half. Perhaps my visceral reaction to People Like Us makes the play’s point about the mutual incomprehension in parts of the Brexit debate; to that extent it succeeded. It also succeeded in recreating the tedium and banality of much UK political debate over the last few years.