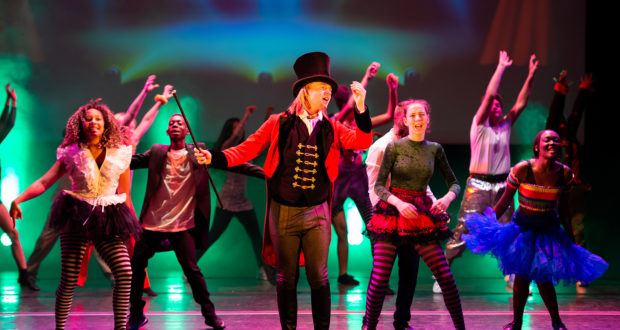 Behind the Scenes of the Anna Fiorentini Variety Show

With four branches across London dedicated to under 18s, along with a section for adults, a talent agency and its own charity supporting underprivileged students, the Anna Fiorentini Theatre & Film School plays a leading role in promoting the performing arts in London. After attending the school’s annual variety showcase at the Hackney Empire, Marianna Meloni shares a rare glimpse of what happens behind the scenes of one of the most prolific and generous acting schools in the capital.

Having lived in Hackney all her life, Anna Fiorentini wanted to give something back to the community she loved. Knowing how the community is exposed to poverty and gang crime, Fiorentini’s ambition was not only to convince children that there’s much more to life than just hanging out on the streets. Most importantly, she wanted to show them alternative paths, teaching them life skills, discipline and a passion for the arts.

In 2001, Fiorentini’s business idea was backed by the Prince’s Trust and went on to win multiple Business of London Awards, establishing a solid reputation for the school within the performing arts industry. Now, the Anna Fiorentini Theatre & Film School counts four branches across London for students aged 6-18, including those with disabilities, learning difficulties or traumatic home lives. Further classes are dedicated to children aged 4 to 6, and a charitable venture for adults, called Stage & The City, helps the Fiorentini Foundation raise funds for students who can’t afford the tuition fees.

First established as a registered charity in 2011, the Fiorentini Foundation offers bursaries to less-privileged children to attend the school. The foundation has now also launched a project for young patients affected by cancer, providing them with weekly activities aimed at preserving their sense of normality. In the last 17 years, the foundation has supported over 350 pupils, thanks to a plethora of outreach initiatives.

During a brief chat with the chair of trustees of the Anna Fiorentini Foundation, Nigel Rothband, I learn that private companies can hire the school’s Performance Troupe for team building or corporate events, as well as visits to local hospitals and care homes. The teachers – all well-established industry professionals – are often engaged in workshops with local schools, where they approach technical skills as well as more general topics like bullying or cultural diversity. There’s also a Lip Sync band of adults, who perform musical medleys in public appearances that garner small contributions from passersby.

Social Media officer Shadia Ashiru is the first to welcome me at the Hackney Empire, taking me through the stage door whilst explaining that their day has started at 8am. It’s now past 6pm and the show is due to kick off in less than one hour. Each corner of the building is buzzing with students busy with their last-minute rehearsals, and the techs are putting the final touches to the lighting and sound.

Despite so much happening, Creative Director Mark Short finds time to answer my questions, admitting that the interview is ‘a rare opportunity to sit down’. Short’s creative process involves devising the whole performance, including the sound, lighting and overall visual impression, before developing the specific choreography. His pupils are welcome to come up with suggestions – some of which have made their way into tonight’s variety performance. Short recounts how when preparations for the showcase started in March, he invited one of his classes to listen to My Immortal, by American rock band Evanescence, and express the feelings the song evoked through movement. I personally witnessed the final result of this exercise during the Hackney Empire show, which was both visually striking and executed by a cast of exceptionally skilled artists.

I ask Short about the challenges of keeping motivation high at all times and he observes that students can be divided in three categories: those who are naturally gifted, those who want to be famous like their idols and those who take classes as a pastime. With experience, he has developed a “trick of the trade” that allows the most ambitious children to become mentors and lead the less committed.

After speaking with Short, I am then accompanied to my seat by the splendid Anna Fiorentini herself, who seems surprisingly relaxed and takes the time to welcome her guests personally. She must be terribly proud of her own achievements and for the amazing team of admins, cast and creatives that make this evening so special. Her non-profit organisation is a model of accessibility and truly representative of the diverse borough where it all began. Fiorentini’s talent agency linked with the school also offers an invaluable platform towards a professional career, with many of its members obtaining important contracts with nationwide screen and stage outlets.

The following three hours of variety performance fly by rapidly in a glorious extravaganza of singing, dancing and acrobatic talent. Small children, teenagers and young adults share the stage or stand out in solo routines, and I can tell the care that went into making sure that each individual shone through. It seems an awful lot of work, but the over 100 smiles that fill the stage of the Hackney Empire in the closing number say it all.

Previous: Once the musical, Queen’s Theatre Hornchurch – Review
Next: The Art Of Gaman, Theatre503 – Review