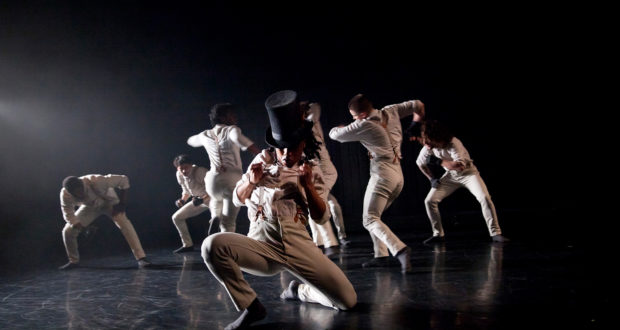 Charles Dickens is getting a new “twist” on stages across the UK this autumn, as contemporary hip hop company Avant Garden Dance revives their full-length dance piece Fagin’s Twist for a UK tour. Taking Dickens’ Oliver Twist as its inspiration, the piece blends dance and text to explore Fagin’s origin story — and suggest that this well-known villain may not actually have been such a bad guy after all. Ahead of the piece’s first tour stop at The Place, we spoke with director/choreographer Tony Adigun to learn more about the piece and his company’s distinctive choreographic style.

How did Fagin’s Twist initially come about?
The show came about three years ago when we first had the premiere. I was given the opportunity by The Place to create a show with Avant Garde. The show was supposed to be Oliver Twist originally, and we spent some time looking at Oliver Twist … but that’s something that wasn’t satisfying. I thought the story was one that everyone knew, and also it was a happy ending, in terms of the rich uncle coming to save [Oliver].

So I wanted to do something that was respecting the original, but was also changing something that everybody expected of the original. So I looked at Fagin as a character, and from that moment on, we went down that route, to look at a character everybody thinks they know — but I think the jury’s out in terms of the lovable rogue and whether he was a bad person. So that was a more interesting route to go about.

What did you learn from the show’s previous runs? Have you made any changes to the show for this latest tour?
This latest tour’s been interesting, because there’s been a change to seven dancers and we have some new main cast characters. We have a new Fagin this year and a new Bill, and we have one of the dancers, Sia [Gbamoi], who’s been there since day one in the ensemble, who’s now playing Oliver. So we’ve had some shifts; it’s been interesting putting them back together and making some changes as well.

Obviously I’m kind of a perfectionist — I’m a tinker, shall we say, I like to tinker — so with the production I’m updating it, and whilst we’ve been on tour between like 24 hours before people are seeing the show [we’re making] changes and improvements. So that’s a constant for the company — we’re always pushing the level of what we put out there. So yeah, it’s been interesting putting the show together. It’s definitely a hard one, because I’m asking the dancers to dance a lot and to act a lot — and to dance and act at the same time, with the text coupled with the movement — and we don’t sacrifice the movement for the text. So it’s a hard task to learn, and also dealing with prop control, the other tasks they have to contend with, along with just being a good dancer.

Your motto is ‘innovate, never replicate’. How have you achieved that with Fagin’s Twist? How is it innovative?
I think it’s probably innovative just in terms of the different aspects that come together. Visually, I feel like it’s a new take on a story that everyone knows. So in that sense, I think we’ve been innovative to give a new version of a story that everyone supposedly knows and the characters that everyone supposedly knows, and to look into the reasons why [Fagin] was doing what he was doing and why he maybe wasn’t as villainous a character as we all thought.

So I definitely think the story; we’re all really proud of it in terms of it being innovative and surprising. Forgive the pun, but there’s definitely a “twist” in the story, and I think from feedback, everybody’s quite surprised in terms of that aspect. It’s almost like a film, in terms of how the story changes. I think the amalgamation of all the aspects we’ve put together, in terms of the set, the prop control, the text, the dance, how they all come together — I think it’s something that we’re all really proud of and I hope people think it’s innovative.

How do you approach the choreography for a full-length piece as compared with individual numbers or shorter works?
I think for me, it’s about looking at what I think the challenges might be, and at the same time, I have kind of an idea about a certain scene, and it could be quite vivid. So we jot those down, and everything’s kind of done in chunks, in terms of looking at the story line.

Definitely for me, even before the choreography, it’s about the music. I’m heavily inspired by music and music kind of tells me what to do, so music is definitely an important aspect to drive the scene, the ideas, the thoughts. It’s definitely about cutting up scenes individually; thinking about scenes that are more ensemble scenes, scenes that are more intimate solos and duets, and then just charting the journey that the audience has in terms of the emotional narrative and the narrative of the show itself. And then I guess it’s a process of refining and refining and refining and tightening it.

For me, I think every aspect of the show is as important as each other, and so as I’m creating the movement, I’m also seeing the lighting and the costume at the same time. They all kind of come together when I think of the choreography, and it’s now about how do I live up to that mental picture to create what’s seen in the mind.

Your company’s style is described as “contemporary hip hop”. How does your work fuse those styles together?
I think generally the company is essentially a hip hop company, but I think we wanted to look at the structure of hip hop, the way it was presented, the music that was used, and really try to give birth to something new. I was into contemporary dance and looked at the elements of that, and I would say we were presenting hip hop dances but within a contemporary structure. So it was new for the hip hop world and also the contemporary world, especially when we started performing at The Place.

I think there’s an element of looking at the individual elements — it can be contemporary in the costume, the music, or the movement, and I think it’s about being able to be free to play with how far you want to go within the styles, to always keep it interesting for yourself and the audience. I think we kind of sit between the hip hop world and the contemporary world, and I think it’s a nice place for us to be, because it allows us to be really open and free with what we create and really take aspects from each, whether it be the movement of contemporary dance but within a hip hop structure or vice versa. So I think that’s something that we’re proud of, that we’ve been kind of able to push that amalgamation forward.

You’ve moved into the artistic dance world after starting as in commercial dance. Did you have any challenges crossing over between those two worlds?

In terms of challenges, I mean — I love a challenge. There’s definitely the challenge of expectancy, in terms of people expecting you to stay in one world, whether that’s the artistic world or the commercial. For me that’s never been a problem, because I’m just naturally interested in so many different things. I thought a lot of people might be intimidated to cross over between these two aspects — definitely for me, I’m born from the commercial world, that’s where I started, so contemporary was a new avenue to go down in terms of the theatre world.

I think more people should do it. I think it’s liberating, I think it’s good to colour outside the boxes and challenge expectations and norms — because I’m not one for safety, let’s say, I like a challenge. And I think we’re all capable of doing whatever we want, it’s just about having the energy or the gusto to actually get up and take that challenge.

Given pieces like yours that have started to fuse hip hop with other forms/styles and put it into the theatre and concert dance worlds, where do you think hip hop dance will go from here? How would you like to see the form evolve?
I think the form is always evolving, that’s the beautiful thing. It’s a style that’s never still — it’s always moving, there are always new styles being developed. And I think that’s the beautiful thing, maybe in relation to other styles, that the style itself is always giving birth to new movement styles.

Moving hip hop into the theatre is something relatively new. I think the companies that are doing it are doing it well, and I think it’s about just getting it to a level where it’s on par with the more, shall we say, “classical” styles, and it has the same amount involved of backing and funding to reach those levels. And so I think for me, that’s exciting in terms of how hip hop is growing in the UK and moving to the theatre, and I think it can only get bigger and bigger and better. I look forward to a time that we’re on the same level and the same par, in terms of backing, as other styles.

Fagin’s Twist will play at The Place from 25-26 September before embarking on a UK tour through 12 November.