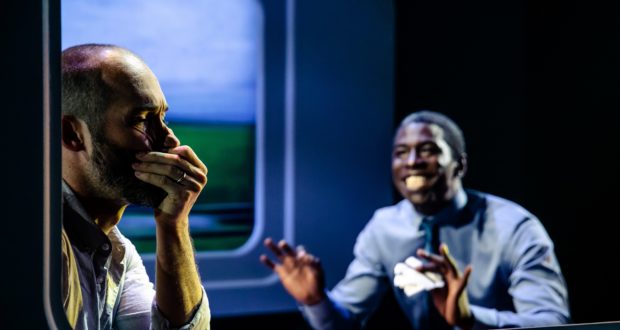 Distance Production Photos ©The Other Richard

Pros: The solid sound and lighting design. Cons: This pessimistic portrayal of mental illness doesn't contribute to fighting the stigma, and risks sending out a discouraging message. The soaring incidence of suicide in British men under 45 has recently become one of the most recurrent topics in fringe theatre. This reflects an attempt to make sense of the phenomenon, raise awareness and, in many cases, try to suggest solutions. Playwright Alex McSweeney's decision to explore this subject matter came after five people he knew committed suicide in just over five years and Distance is his attempt to understand what&hellip;

Playwright Alex McSweeney explores the phenomenon of suicide in young men, but seems to imply that there's never a light at the end of the tunnel.

User Rating: Be the first one !
The soaring incidence of suicide in British men under 45 has recently become one of the most recurrent topics in fringe theatre. This reflects an attempt to make sense of the phenomenon, raise awareness and, in many cases, try to suggest solutions. Playwright Alex McSweeney’s decision to explore this subject matter came after five people he knew committed suicide in just over five years and Distance is his attempt to understand what drove them to this extreme act.

The opening scene shows Steven (Adam Burton) suffering from insomnia and being tormented overnight by obsessive and suicidal thoughts. It is a powerful scenario that plunges us abruptly into the depths of the character’s despair and receives a striking visual rendering in Dan Saggars’ expressionistic lighting. Sudden contrasts between brightness and shadow, blurred projections and blinding spotlights pointed towards the audience are an immediate indication of serious distress.

Fast forward a few hours, and a still disturbed Steven is on a train to Manchester for a job interview, when he bumps into his old acquaintance Alan (Abdul Salis), who starts enquiring about him and his family. Interwoven with stifling flashbacks of his nocturnal terrors and recollections of past conversations with his ex-wife Sonja (Lindsay Fraser), the extent of Steven’s misery unravels before his disbelieving friend. However, despite their willingness to help, neither Alan, nor the other people around Steven seem able to arrest his downfall into mental illness.

Dragged into the eye of the storm by Burton’s convincing performance, we witness increasingly tragic episodes, in a whirlwind of events that chase each other at breakneck speed. Elements of the set are drawn in and pushed out of sight by the five-strong cast, in a seamless transformation where Steven is always centre-stage. Thanks to this directorial solution, he remains the epicentre of our attention, whilst the world around him is in continuous evolution.

In devising his character McSweeney refrains from giving a clear indication of the prime cause of this dire condition and whether anyone could offer a solution to the problem. Sonja’s unsympathetic behaviour lacks emotional intelligence but is implicitly justified by Steven’s unreliability, whereas Alan’s apparent empathy stops at the surface.

It is mainly this lack of clear position and plausible answers that undermines the relevance of Distance in the long term. If I were someone affected by suicidal thoughts, I’d find this production deeply discomfiting. Its resonant depiction of mental illness might generate distress, without suggesting a way out, and possibly even implying that an escape doesn’t exist. In order to fight the stigma and open a conversation about this timely issue, those tormented by suicidal thoughts need to be reassured that a way out is within reach and that, by seeking help, they can get better. Also, their friends and family need to be reminded that they can play an active role and make a difference for their loved ones. Distance’s failure to send out a positive message defeats the object of many awareness campaigns.