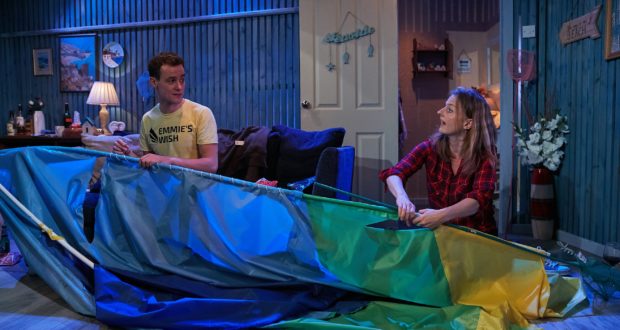 Con’s: So many issues addressed, so little time given to any of them.
Caterpillar, Theatre503 – Review

Pro’s: It’s light hearted enough that the two hours flow by smoothly. Con’s: So many issues addressed, so little time given to any of them. Theatre sometimes is all about a good metaphor.  And us reviewers do love to try to decipher them.  So Caterpillar was already ripe for interpretation, especially when it was set around the Scarborough Birdman competition, an annual event where contestants hurl themselves off the end of the pier hoping to “fly” as far as possible before plummeting back to earth; or sea in this case.  Before the play has even started you can almost&hellip;

As a piece of entertainment it works just fine, but as a piece of social commentary, Caterpillar lacks the required punch.

Theatre sometimes is all about a good metaphor.  And us reviewers do love to try to decipher them.  So Caterpillar was already ripe for interpretation, especially when it was set around the Scarborough Birdman competition, an annual event where contestants hurl themselves off the end of the pier hoping to “fly” as far as possible before plummeting back to earth; or sea in this case.  Before the play has even started you can almost hear the scribbling of pens as we write lines about the caterpillar becoming the beautiful butterfly, of taking flight, both as the butterfly and as the Birdman and of course leaps of faith.  And our hopes for metaphors are simply reinforced by the play’s opening scene as a monologue talks of flight, ending with “I’ve done it, I’ve jumped.”

It’s a gripping opening scene, and in that moment you are completely transfixed by Judith Amsenga’s Claire, the hard-nosed daughter of the B&B owner, wondering where it is leading. It’s a brilliant opening scene, it’s a brilliant speech, but it’s also one that the rest of the play never quite lives up to.  Because the big problem I had with Caterpillar is simply I never quite worked out what it was trying to say with all it’s obvious metaphors. It may have been me, maybe I missed something, but by the end I was so overloaded with all the various issues writer Alison Carr seemed to want to cover that I was left feeling nothing much had ever really been addressed.

Caterpillar is set predominately in the front room of a Scarborough guest house. The owner, Maeve (Tricia Kelly) has recently had a stroke, so daughter Claire, is there to look after her. Simon (Alan Mahon) is the only guest for the weekend, having not received the cancellation email. He is there to take part in the Birdman competition in dedication to his girlfriend who had been so excited watching it just before she succumbed to her cancer. It’s a fantastic set up and superbly played by the cast of three. Over the course of the weekend all reveal their secrets to us, the lies they are living, and the fantasy world they have created around themselves to cope with the real world. This makes Caterpillar a lovely piece of theatre; it’s full of good humour, the actors fill their characters out nicely and as I’ve said more than once before, Theatre503 is just a wonderful place to watch theatre.

But for all its positives, for something that wants to address such serious social issues, it fails.  It touches on hard hitting subjects; post-natal depression, self-harm, parental abuse to name but three, but with so many serious issues all thrown in together, none are ever given time to develop. Instead the characters become too confusing. Scenes are ruined by trying to address too much, causing more confusion than clarity about what the play wants to say.

Ultimately Caterpillar never quite takes flight, it never becomes that beautiful butterfly it promises, but it has promise if only it could decide what type of butterfly it wants to be.