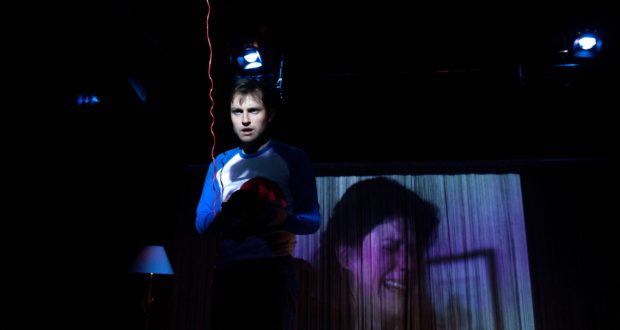 In There but for the Grace of God (go I), solo performer Adam Welsh ruminates on the relationship between parents and their children, as well as the missing child of the 80s whose names bears a striking resemblance to Welsh’s own. As the show debuts this week at Soho Theatre, Welsh shares a bit more about the family dynamics behind his new show – and why we bother with the theatre at all – in this guest blog.

Theatre: basically, just sitting in a dark room with strangers. And that’s just the theatre-makers. If you’re making a show, you spend full days in the dark, anxious, broke and exhausted, wondering, ‘Who are these people?’ If you’re a punter, there’s no guarantee you’re going to have a good time either.

And yet, every night people throughout the nation are dispensing with risk-free forms of entertainment such as Love Island or Instagram in favour of this ancient and often disappointing art form. It’s easy to wonder sometimes why we bother with theatre at all.

A friend once told me that it’s because we’re lonely. Either we go to the theatre to feel more connected to others, or we work in it to get laid. I sort of buy that. I’ve definitely felt that at least all of the time – but now I’m rehearsing a solo show, which mostly involves me, in solitary confinement, talking to faces I’ve drawn on the walls. Perhaps not the best antidote to loneliness.

But I can’t complain. After all, I did choose to write this thing and perform in it, and now it is happening, Christ, it’s happening at Soho Theatre. I mean, to be honest, I’m not even sure why you would come and see it; it’s a show about me, my dad and about a child that went missing in the 80s. Hardly zeitgeisty – though there is a bit of true crime in it, if you like that.

What I will say is this: When my dad was a teenager his younger brother died, and he didn’t quite know how to deal with it, so he wrote a bunch of poetry. I use some of his poems in the show. I’ve known about them for years, and to be honest, I’ve always taken the mickey out of him for it because they are a bit earnest. But when he was due to have a quadruple heart bypass, he woke himself up, because he was reciting one of these poems in his sleep – a poem that he’d written nearly 50 years ago. And that got me thinking.

Brian Boyd, in his book On the Origin of Stories, says that one of the functions of art is to practice certain human behaviours in a safe context, and ultimately to increase our chances of survival. He says that by compulsively playing with patterns of human behaviour in art, we strengthen the neural pathways that process these patterns. So maybe, some part of my dad was writing that poetry as an expression of his survival. Maybe that’s why I’m making this show. And maybe that’s why we bother with theatre. I know that’s the sort of experience I want my audiences to have. I want us to be able to stick a collective two fingers up at death, and I want us laugh in its face. I’d say if we can do that, we’re onto something.

There but for the Grace of God (go I) is currently playing at Soho Theatre through 8 August.