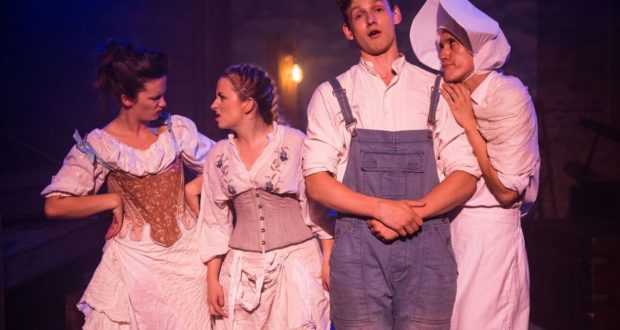 Around The World In 80 Days @ Union Theatre – Review

Pros: Soaring harmonies, immersive set design, and some truly terrific choreography throughout Cons: Several questionable directorial decisions plague the production Based on the novel by Jules Verne, Phil Willmott’s adaptation brings a musical theatre version of the Victorian classic to Union Theatre - sewn together by the talent of a young and aspiring cast. This reworking, which sees the addition of a variety of song and dance numbers to keep things interesting, stays true to the original in other respects, with lead character Phileas Fogg traversing the world on a £20,000 wager, accompanied by his newly hired valet, Frenchman&hellip;

A novel reworking of the Victorian classic that stays true to the source material, but comes with some obvious and avoidable snags.

User Rating: Be the first one !
Based on the novel by Jules Verne, Phil Willmott’s adaptation brings a musical theatre version of the Victorian classic to Union Theatre – sewn together by the talent of a young and aspiring cast. This reworking, which sees the addition of a variety of song and dance numbers to keep things interesting, stays true to the original in other respects, with lead character Phileas Fogg traversing the world on a £20,000 wager, accompanied by his newly hired valet, Frenchman Jean Passepartout.

Taking our seats at the beginning of the show, we admired the astounding level of detail in the set design. Upturned crates, lightbulbs with pulsating wire filaments, thick, gnarled ropes and period paintings all came together to transport the audience back to 1872. However, it would have been nice if the same attention was paid to the various props littered throughout the show. The eagle-eyed among the audience might have noticed that the white elastic chinstrap on Captain Fix’s helmet was not quite of the era, or that the (beautifully engineered) elephant head that was stomping through the Indian jungle belonged not to an Asian but an African elephant… However, these are only minor criticisms that didn’t detract from the overwhelmingly impressive attention to detail.

The cast had clearly poured themselves into their characters, though in places their infectious energy could have been reigned in slightly. On the writing and directing front, it was quite clear that the cast had been directed to add a level of bawdy ‘Carry-on’ homoeroticism to their performances. This decision somewhat plagued the performance, and made it difficult to reconcile some of the characters’ motivations when they were constantly pinching each other’s buttocks. For example, one minute Victorian explorer Captain Fix was explaining (through a brilliantly-written song and dance set piece) how manly shooting wild African game was, and the next he was sitting awkwardly in Passepartout’s lap. This might not have made the play suffer so much if it were only one or two characters engaged, but having all the characters in on it blunted the comedic edge.

Where the cast truly came into their own was during the more choreography-heavy segments. These moments gave the young and talented collective the opportunity to show off how well they gelled; tap routines, faultlessly harmonised verses and boundless energy combined to produce some of the show’s best moments. The play would do well to build on this, perhaps with the introduction of a larger musical ensemble (if resources allow) to accompany the show’s plate-spinning one-man-band. On the technical side of the sound design, the audio quality and volume as it stood made for a slight disservice to the committed cast – the sound was just a bit too quiet in some of the show’s bigger numbers, something that could surely be easily corrected to really fill the space.

In its current form, the show is held back by a few decisions and technical limitations. With some light tweaking, this could be a show that truly shines.