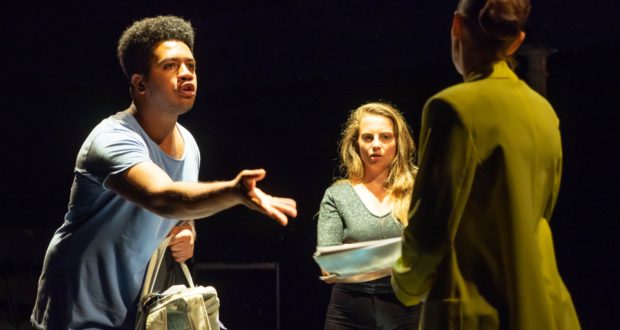 Pros: A perfect rework of what was already one of recent history’s most memorable plays.

Cons: At over two hours long, the seating can get a little uncomfortable. But only a little.
Earthquakes in London, Bridewell Theatre – Review

Pros: A perfect rework of what was already one of recent history's most memorable plays. Cons: At over two hours long, the seating can get a little uncomfortable. But only a little. When Earthquakes in London was performed at the National Theatre back in 2010 it was without a doubt one of the most ridiculously ambitious productions going. The whole stall seating section was removed and replaced by a snaked walkway, with stages at both the front and back of the auditorium. So the idea of the show being revived in the small confines of Bridewell Theatre for just&hellip;

Sedos somehow manage to pull off the impossible in making this play as unique and unmissable as the original National Theatre production.

User Rating: 4.73 ( 2 votes)
When Earthquakes in London was performed at the National Theatre back in 2010 it was without a doubt one of the most ridiculously ambitious productions going. The whole stall seating section was removed and replaced by a snaked walkway, with stages at both the front and back of the auditorium. So the idea of the show being revived in the small confines of Bridewell Theatre for just five nights seemed an absolute folly.

Earthquakes In London follows three sisters long abandoned by their father, a climate change expert who sold out to corporate airlines in the seventies to help push them through massive airport expansions. Except he knew full well what a lie it all was and that by doing so, he was setting the world on a path to disaster. As we hit current day the world has changed, clearly heading to extinction, global warming out of control and affecting all our lives.

The sisters are all very different, struggling for their place in an overcrowded and yet lonely world. Sarah (Carrie Pennifer) is a Government Minister, responsible for deciding on further airport expansion; Freya (Kimberly Barker) is a pregnant teaching assistant; and the youngest, Jasmine (Izzi Richardson), is the rebel, aimlessly seeking out purpose.

Whilst Sarah is wined and dined by the airline industry, much like her father had been before her, Freya struggles with the realisation that she is about to bring a new life into a dying world, and wondering what future her daughter will have.

Mike Bartlett’s incredible writing manages to mix political and social themes, and is laced with wonderful humour. And maybe it’s because of the power of the writing that even without the grand staging it originally received it can still hold its own as a piece of incredible social commentary. Even global warming oozes a little sex appeal through Bartlett’s words.

Underneath this there are themes of isolation and loneliness: even on a planet with seven billion people we can feel more alone than ever. The sisters all seek out companionship and yet all still feel very alone in their own separate ways. Scenes hit you one after the other, even overlapping in a scatter gun approach. There is rarely any pause for breath, making its two hour plus running time seem half that.

Between the complex word play and the fast changing scenes, there are the surreal moments that could have been a folly if mishandled. The ensemble break into dance for no obvious reason other than to maybe give the audience a chance to briefly take a breath. Wonderful effects are drawn from Arcade Fire’s ‘Rebellion’, plus ample use of Coldplay – after all they are the songwriters of the climate change brigade.

The absolute bravery, or maybe insanity, of director Chris Davis to stage this play in an amateur production makes it all the more incredible. And that mention of amateur is the only time it should be raised, because believe me, there is absolutely nothing amateur about this production.

This play is so much more than just the sum of its many parts. It is both complex and simple all at the same time. It is a play that demanded attention when it was first performed, and which in the hands of Sedos demands attention again, a credit to all involved and evidence that Mike Bartlett’s words don’t need clever gimmicks, just a strong desire to perform them.