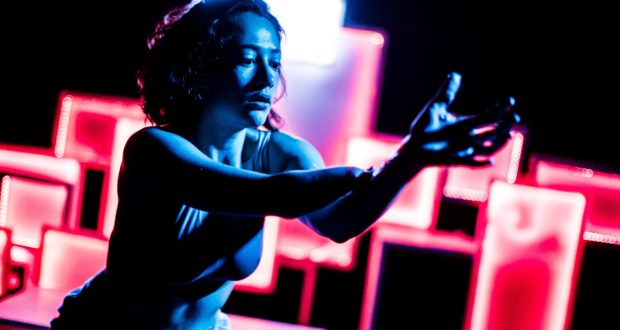 Cons: Some technical issues with the surtitles and both plays were a bit rambling at times.
Breaking Out Season: Libby’s Eyes and Nine Foot Nine, The Bunker – Review

Pros: Ariane Gray's performance as the Artificial Intelligence device in Libby’s Eyes.  Cons: Some technical issues with the surtitles and both plays were a bit rambling at times. The BREAKING OUT festival at The Bunker is showcasing six emerging theatre companies, featuring two events per night. Tickets can be bought for single performances or for the whole evening. The rather stuffy space is offset by the friendly and helpful staff, for whom nothing is too much trouble. Libby’s Eyes (Mondays and Thursdays at 7pm) - Libby is a visually impaired young woman living with her parents and working in an&hellip;

Two enjoyable short plays highlighting the difficulties encountered by people who are different from the majority. Both need refining and a bit more development to explore fully the many questions raised.

User Rating: Be the first one !
The BREAKING OUT festival at The Bunker is showcasing six emerging theatre companies, featuring two events per night. Tickets can be bought for single performances or for the whole evening. The rather stuffy space is offset by the friendly and helpful staff, for whom nothing is too much trouble.

Libby has been assessed as ‘functioning’ so although allowances have been removed she is supplied with some Reasonable Adjustment Technology, whether she wants it or not. It comes in the form of a small Artificial Intelligence device, Libby’s Eyes. As the machine learns and re-calculates its purpose it starts to interfere with Libby’s daily activities, making judgements about people and situations, eventually becoming sentient.

Ariane Gray is quite chilling as the AI. Keeping face and body as still as possible the tone and emotionless quality of her voice is just right. Also worthy of note is Holly Joyce as the long suffering mother, especially when she delivers an impassioned, heart-rending description of the constant terror she experienced when Libby was growing up and becoming more independent.

The performance is audio described by a character who becomes part of the play and takes on some of the roles. Sometimes the audio description overlapped the dialogue, and throughout there were times when things seemed rushed and ‘shouty’. Some of the jokes were a bit weary and the constant use of the description Inspirational (with that emphasis) was very irritating. I realise that was the point, but it could have been done with more subtlety and possibly more impact as a result.

Drawing on the writer’s own experiences  the play spotlights obstacles, attitudes and behaviour towards the partially sighted.

Delivered as a mixture of dialogue and sign language this play is fully captioned throughout the run. There appeared to be some technical issues with the surtitles on this particular evening, the words not always in sync with the action. For example, ‘Playground Chatter’ was indicated when in fact the scene in question depicted a painful growing spurt containing some horrific screams. The words were also sometimes hard to distinguish as they blended into the background. Easily rectified I am sure.

The non-linear storyline focuses on young couple Cara and Nate who are about to start a family (daughter Sophie). Their reactions to a positive pregnancy test  indicate their expectations and fears; Nate seems to want Cara to just stay indoors all of the time to stay ‘safe’, whereas she needs to be out doing things and getting involved in life around her. Added to the mix is the sudden and inexplicable growth of the majority of women all over the world, including CARA.

‘Sprouting’ becomes a kind of rite of passage for the next generation of young women, with prejudicial and bullying behaviour towards ‘sprouters’ by those not affected, or towards ‘stunters’ by ‘sprouters’, etc. Clearly, infrastructure around the world is not coping with the sudden change.

The set and lighting are very effective and there were many funny moments. There’s the ‘tenderhooks’ versus ‘tenterhooks’ debate, and watch out for the adverts targeted at the new market: ‘Growing Panes’ adjustable windows for sprouters anyone? Or perhaps some camouflaging ‘Sprouting Marks Sparkle’?

The hand out says that the play “. . . has more ideas to it than we could ever hope to cover in an hour-long show.”  They’re not wrong. It was a bit disjointed at times with a lot of ideas that could be explored and developed further.

Previous: Dare to Do (The Bear Maxim), The Space – Review
Next: Ghost About The House, King’s Head Theatre – Review