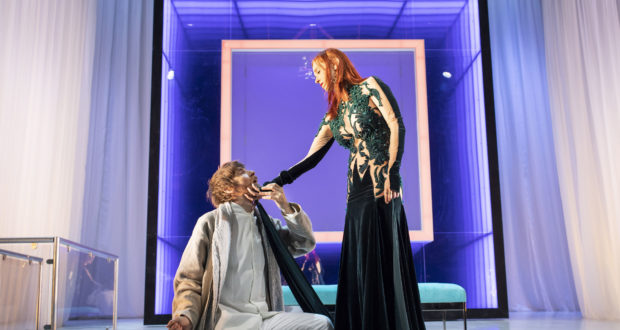 Pros: Good to see a foreign language production in the West End

Cons: A failure of common sense in the use of surtitles
Tartuffe, Theatre Royal Haymarket – Review

Pros: Good to see a foreign language production in the West End Cons: A failure of common sense in the use of surtitles Molière’s Tartuffe on the West End stage. A story of bad faith and credulity for the age of MAGA and taking back control, in a version that’s simultaneously accessible to English and French speakers. An admirable project, and one that might have made perfect sense on paper. The same is not true on stage. Christopher Hampton’s adaptation transposes the action to present day California. We know this only because Andrew D Edwards' set is a David&hellip;

An incoherent production in which design, direction and bilingual delivery all conspire against engagement with character, place or the play’s themes

User Rating: 4.85 ( 1 votes)
Molière’s Tartuffe on the West End stage. A story of bad faith and credulity for the age of MAGA and taking back control, in a version that’s simultaneously accessible to English and French speakers. An admirable project, and one that might have made perfect sense on paper. The same is not true on stage.

Christopher Hampton’s adaptation transposes the action to present day California. We know this only because Andrew D Edwards’ set is a David Hockney painting in 3D, all clean lines, uncluttered space and glistening blue.  That uncluttered space becomes a problem straight away, in the supposedly hedonistic opening scene. Characters wave items of clothing, clutch at each other and swig from bottles of champagne, but despite the pumping dance music there is only the most half-hearted attempt at choreography, and in this wide, sterile space it barely earns a two out of ten for debauchery. As the play proceeds, the emptiness of the stage gives rise to that tiresome phenomenon where characters move about with no discernible logic; they don’t walk to the kitchen to make coffee, or practise yoga by the pool, they exist only to say their lines, and move about only to add a little visual interest.

It might be expected that relocating the action in time and place would make this 17th century play more immediate and accessible. Far from it, and it’s hard to tell whether the non-naturalistic feel is deliberate, or an unintended consequence of choices on staging, performance and design. Choices like the echoing lightbox that serves as a window to the interior, but towards the end of the play suddenly becomes a physical embodiment of encroaching tragedy; like the decision to have Elmire spend the entire play in evening dress; like the portrayal of Tartuffe as an unambiguously sinister figure with no charisma or charm to help explain his sway over Orgon and Pernille. Either way, that lack of naturalism makes it almost impossible to have any feeling for the characters, or belief in their relationships.

Nor does comedy value make up for the shallow characterisation. Damis is given a few opportunities to demonstrate his hot-headedness, with flailing fists and grimaces, but he’s always restrained too quickly for physical comedy to flourish. Any comedy that might arise from the wise servant, stupid master dynamic is diminished by the fact that Dorine doesn’t look or behave like a servant; she’s as elegantly dressed and apparently as indolent as the rest of them. So we’re entirely dependent on the text for comedy, and the text in this case is hobbled by problems of delivery.

The principal problem lies in having the characters speak a mix of English and French, which proves to be really hard work.  In hindsight it’s possible to divine some rationale behind who speaks which language, and at which moment, but coming to the production fresh, it’s very difficult to know which language to expect at any moment, and consequently whether or not you need to be checking the surtitles. The text is dense and spoken fast – often too fast – so it’s all too easy to miss words or even whole lines. I’m confidently Francophone and regularly review productions in French, but for a non-native speaker it’s a different and greater challenge to follow dialogue that switches abruptly between languages, than to follow a production that’s consistently in one or the other. And then, of course, any gesture or look that’s used to accentuate the comedy of Molière’s lines is most likely lost on audience members who are reading the screen.

It is not to this production’s credit that it gets as many laughs in the last ten minutes as it does in the whole of the rest of the play. These last laughs go to a succession of crass and all-too-easy Donald Trump jokes, and it’s hard not to conclude that they are the only jokes to have been understood by a significant proportion of the audience. Despite its good intentions, I doubt that this is the production to win an army of new fans for Molière.