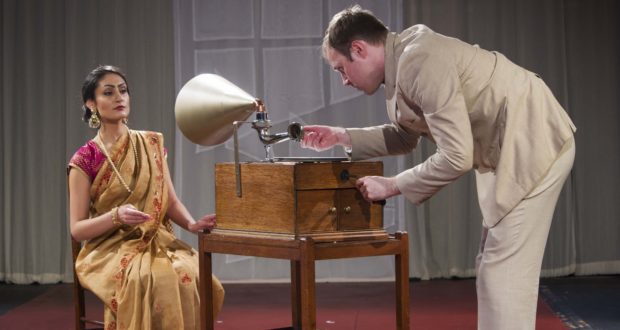 Cons: Some scene changes could be improved; the long first half makes the ending of the short second half feel particularly rushed.
Gauhar Jaan – The Datia Incident, Omnibus Theatre – Review

Pros: Full of historical detail, with humour to balance the tone. Sound design is strong, and hypnotic dance sequences bring extra sparkle. Cons: Some scene changes could be improved; the long first half makes the ending of the short second half feel particularly rushed. The Datia Incident pitches in-demand singer Gauhar Jaan (an outstanding Sheetal Kapoor) against a Maharaja, taking the many rumours and descriptions of Jaan as the basis for a multi-perspective story. It’s all told to our man with a gramophone, keen young American sound engineer Fred Gaisberg (Jordon Kemp), whose goal is to capture Jaan’s famous&hellip;

Shining a light on India’s pre-Bollywood queen of entertainment, Gauhar Jaan is an original, funny and exciting debut play, albeit with a rushed ending and some scene change issues.

User Rating: 2.78 ( 5 votes)
The Datia Incident pitches in-demand singer Gauhar Jaan (an outstanding Sheetal Kapoor) against a Maharaja, taking the many rumours and descriptions of Jaan as the basis for a multi-perspective story. It’s all told to our man with a gramophone, keen young American sound engineer Fred Gaisberg (Jordon Kemp), whose goal is to capture Jaan’s famous vocals on a gramophone record – the height of new technology in 1902. Subtle but essential sound effects (by the playwright, Tarun Jasani, whose background is in film) underpin the play, taking us to the deck of a ship or to a Maharaja’s palace with rain lashing down outside. The rhythmic dancing sections, which work brilliantly, are punctuated by recorded sound but also by stamping feet or jingling bells on the dancers’ ankles, whose performances are truly hypnotic. Set design is minimal, with carpets and tile motifs, though some scene changes are hampered by moving to the next scene before the preceding one’s furniture has been fully moved off-stage.

Jaan came to The Maharaja of Datia’s court to perform at a major music event for the prince’s circumcision (well, why not?!). Each character takes on new traits according to the varying sympathies of the stories: first, the Maharajah is slightly dim and very needy, next he’s all-powerful and vindictive, stating that ‘woman is an enemy so dangerous, the scriptures dare not go there’. There are nods to a traumatic event when he was young (possible child abuse, though we never have a firm definition, nor could I find any background on the internet); similarly, we learn Jaan’s mother, Badi Malka Jaan, was humiliated by the previous Maharaja, but we don’t know how – again, no clues via Google. We also see the Maharaja’s right-hand man (an energetic Devesh Kishore) take some considerable liberties, like freely insulting his boss, which I’m not sure would be allowed. Essentially, this play churns the rumour mill, but not everything is resolved, and the shorter second half feels rushed.

The cast of supporting characters played with versatility by Jas Steven Singh can, at times, feel sketchily written. Some historical facts are omitted, too, such as Jaan being born Angelina Yeoward, and having Armenian Jewish and Indian-born English parents, which I feel adds another dimension to her rise to the top. Despite this, I feel debut playwright Tarun Jasani has worked hard to convey Jaan and the mysterious Datia Incident, and obviously economies had to be made to fit the drama into 90 minutes. There’s an accompanying photography exhibition in the theatre foyer that adds more context.

By the end, I felt confident that Jaan was less of a diva than she first appeared, but I did enjoy her barbed insults, hurled more freely when she was portrayed as the Mariah Carey of India. Kapoor revels in her great one-liners, slandering a rival with the remark that ‘like the railway track, she’s been laid throughout the country’, or referring to the Maharaja’s poor taste in other performers as having ‘Van Gogh’s ear for music’. Other characters get some funny dialogue, too, with running innuendo about ‘milk’, but Jaan gets the cream of the crop.

I’d like to see this play transfer, so more people can enjoy it, especially just one year after the 70th anniversary of Indian independence. With small adjustments to timing, and perhaps more background details for the overly curious (not just me!), Gauhar Jaan could shine even brighter.

Previous: Sophie, Ben and Other Problems, Tabard Theatre – Review
Next: Win tickets for Shit-faced Shakespeare’s The Merchant Of Venice