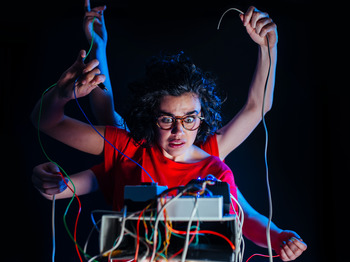 Pros: A bright cast giving it everything they’ve got.
Cons:Lots of shiny, happy faces messing about with gadgets made it feel more like a CBBC show.
Then Again, King’s Head Theatre – Review

Pros: A bright cast giving it everything they've got. Cons:Lots of shiny, happy faces messing about with gadgets made it feel more like a CBBC show. One of the many pleasures of visiting the King's Head Theatre is the sheer variety of shows, if you’re willing to keep an open mind. I've already seen a brilliantly eclectic mix, from Hitler in the Big Brother house to a death row prisoner's last night on earth; you could see virtually anything at the King’s Head. But whatever the show, it is always executed with style and conviction. On this occasion we had&hellip;

Whilst not exactly breaking new ground, a natural energy carried the play through any rough patches.

User Rating: Be the first one !
One of the many pleasures of visiting the King’s Head Theatre is the sheer variety of shows, if you’re willing to keep an open mind. I’ve already seen a brilliantly eclectic mix, from Hitler in the Big Brother house to a death row prisoner’s last night on earth; you could see virtually anything at the King’s Head. But whatever the show, it is always executed with style and conviction. On this occasion we had Then Again, a play that tells the story of Millie, a seemingly brilliant but misunderstood scientist studying for a PhD. In her spare time she is also an inventor who is slowly building a reputation on social media.  Frightfully nervous and tongue tied, the only person she can really talk to is her best friend Anna. Purely by chance she invents a time machine and meets future versions of herself. She begins to curse her invention and fear the person she may become.

On paper it hardly seems the most daring or innovative plotline; except perhaps for making the scientist female when such characters are to best of my knowledge, always male. But the storyline jogs along at a steady pace as the four strong cast make full use of some nifty electronic props and smart sound effects. It never goes deep enough to really challenge the audience; but instead opts for a frothy mix of YouTube style excerpts and brief musical interludes, reminiscent of 80s style synth pop. It does on occasion feel dangerously lightweight and insubstantial; wheeling around gadgets on stage that flash, beep and ping gives the impression of a play aimed at a much younger audience. A talking toothbrush only adds to the CBBC feel of the show.

That said, the Tremolo Theatre Company make the most basic of sci-fi stories work with a much needed dose of energy and enthusiasm. The cast are infinitely likeable and watchable; Hanora Kamen leads the company and plays the nervous, intense Millie for all its worth; Lily London gets most of the laughs as Millie’s best friend, Anna, whilst Alice Richie as Dr Yolanda and Jack Drewry as Miri provide able support in their respective roles.

Despite its inherent weaknesses, Then Again achieves a level of consistency in a performance that holds together just long enough for the 60 minute presentation. Overall, this was a good effort.