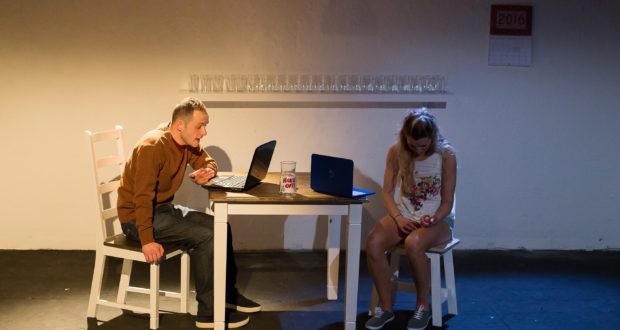 Pros: A compelling story with a central thread that held it all together. And the lighting, oh the lighting was just wonderful even in its simplicity.

Cons: Some characters don’t gel within the central storyline and detract from the overall quality.
Gold Coast, Theatre 503 – Review

Pros: A compelling story with a central thread that held it all together. And the lighting, oh the lighting was just wonderful even in its simplicity. Cons: Some characters don’t gel within the central storyline and detract from the overall quality. Whatever is written about Gold Coast’s portrayal of a soldier suffering from PTSD cannot compare to the praise given by David, an actual veteran of the first Gulf conflict, who in the post-show Q&amp;A described how he watched from the audience, mentally ticking off his symptoms as they were acted out on stage. His emotion was clear and a touching&hellip;

A play with the depth and quality you expect from Theatre 503, that with further development could become even more compelling.

User Rating: 2.65 ( 1 votes)
Whatever is written about Gold Coast’s portrayal of a soldier suffering from PTSD cannot compare to the praise given by David, an actual veteran of the first Gulf conflict, who in the post-show Q&A described how he watched from the audience, mentally ticking off his symptoms as they were acted out on stage. His emotion was clear and a touching tribute to the well written play just witnessed.

Gold Coast centres on the deteriorating relationship between Joe and Roz, played superbly by Tommy Burgess and Olivia Bromley. We watch the happiness of newlyweds then, following Joe’s short posting to Iraq before being discharged for an unspoken act of misconduct, the turmoil as Joe struggles to cope with PTSD and things fall apart. In between these moments we are fast forwarded to 2016, to witness their now 13 year old daughter struggling to cope with the guilt that maybe she was responsible for her parents’ separation. The scenes as father and daughter communicate via Skype are wonderfully played out and enough to break your heart.

The emotional turmoil, the stress for both the sufferer and those around him are perfectly depicted in the strong performances, made possible by Eloise Lally’s wonderfully creative directing and Louise Gooding’s thoughtful writing. Put simply, you feel compelled to care. Praise must also go to Will Alder for his lighting. In such a small venue there is limited scope but what he does is so effective. The white washed walls of the stage allow for the scene to be changed very cleverly: the soft lighting of home turns suddenly to the bright harshness of Iraq deserts, then to the tranquility of the therapist’s space. So good it’s easy to forget how much thought has probably gone into it.

However, in between some great moments, the play falls down with its peripheral characters and concepts. In some ways I appreciate they are necessary to aid the story, as they allude to something terrible that Joe has been through, but they feel too forced, too fake, too cumbersome. Some simply need to be removed, others perhaps should be redrawn and given more realism. The two army doctors are just annoying and left me wondering if they were meant to be in Joe’s imagination; the daughter’s older online “boyfriend” forms part of a scene that means to hint at the greater picture of the story, but just feels unnecessary and ill fitting.  Worst of all, though, and in my eyes almost indefensible, is the alternative healer/ therapist/ “definitely not a psychiatrist”. If this play gets a rewrite, I seriously hope this character is completely replaced. She has no grounding in reality whatsoever. Her anti-war stance when talking to someone so seriously damaged in the war is something that I hope would no professional would ever make evident in real life! As for her strange desire to convince Joe to throw away his old life, including his wife, it just makes no sense and threatens to ruin a great play. And the less said, the better, about this character’s final scene; again I appreciate what it alludes to, but there could be better ways to achieve this.

Still, all of that said, this is a wonderful play. Only on for five nights it must be assumed that it is still a work in progress and will make a comeback at some time. If so, I hope that the strength of its core characters is developed whilst the faults that distract are removed.  I would then happily pay to go back and watch this all over again.