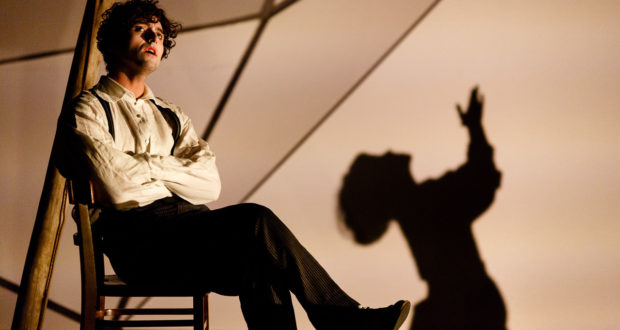 Pros: Everything about this production, from the performances and the writing to the music and the design, is fascinating to watch and touching to experience.

Cons: It is hard to say anything bad about this deeply felt love story and the dedication of the team behind it.
The Flying Lovers of Vitebsk, Wilton’s Music Hall – Review

Pros: Everything about this production, from the performances and the writing to the music and the design, is fascinating to watch and touching to experience. Cons: It is hard to say anything bad about this deeply felt love story and the dedication of the team behind it. After captivating audiences at The Globe in 2016, Kneehigh’s play about Marc and Bella Chagall, art and love begins its 2018 tour with a four-week stop at Wilton’s Music Hall. Fitting the magical surroundings of Wilton’s like a glove, The Flying Lovers of Vitebsk is 90 minutes of heartbreakingly beautiful stagecraft and song that charts a couple’s&hellip;

This beautiful, fragile two-hander about creativity and love, Emma Rice’s last production for Kneehigh theatre company, is spell-bindingly staged and performed – a treat.

User Rating: Be the first one !
After captivating audiences at The Globe in 2016, Kneehigh’s play about Marc and Bella Chagall, art and love begins its 2018 tour with a four-week stop at Wilton’s Music Hall. Fitting the magical surroundings of Wilton’s like a glove, The Flying Lovers of Vitebsk is 90 minutes of heartbreakingly beautiful stagecraft and song that charts a couple’s love story as they journey across a most volatile period in recent history.

Everything about this production is mesmerising, from the detailed and entrancing performances given by Marc Antolin and Daisy Maywood as Marc Chagall and his first wife Bella (it seems fated that Antolin should share his character’s name, since he inhabits him so well) to Daniel Jamieson’s deeply poetic and truthful writing. The actors, aided by careful and imaginative direction by Emma Rice and her co-choreographer Etta Murfitt, fully embody the writing, moving together in the type of excellent physical theatre choreography that can seem more real than normal movement.

We begin with Marc as an old man alone onstage, talking into a phone whose long, dangling cable precariously links him to the outside world. We then swiftly dive into his reminiscences, watching as young Bella Rosenfeld of Vitebsk, Belarus meets the Jewish painter Marc Chagall in 1909. They fall in love and marry, quickly beginning their wanderings across Europe in that most uncertain of times. We witness everything from the October Revolution to the Holocaust, all evoked symbolically, almost whimsically, from afar. Their relationship becomes the lens through which we witness the passing of history. Young love, the vexations of married life, the loss of what is most dear to you, are all movingly portrayed against the backdrop of a turbulent early-to-mid 20th century Europe. An exploration of Chagall’s need to paint and his artistic inspirations runs through, but significantly the play is also about the artistry of women being less celebrated than that of the men in their lives. We watch with some regret as Bella puts childbearing, housekeeping and taking care of family before her intellectual aspirations. There is always something more important for her to do which, as Marc tells her cruelly, is ‘why you will never be a writer’.

It is not just the movement of the actors that is well-choreographed in this show; the sound, costume, prop and set design too come together to make a coherent, magical whole. In an inspired distillation of many of the play’s themes, including the perils of falling in love, the changing nature of the times and the suspension in mid-air that is so central to Chagall’s artwork, everything onstage seems to be tilting, falling, or swinging by a thread. Marc and Bella hardly ever stand on two feet or sit quietly on a chair; they are ever dancing, moving, flying. Music and sound effects come from all angles, the lighting keeps changing, props are numerous and fanciful, and everything comes together to create a surreal experience for the senses that keeps you on the edge of your seat.

One of the most memorable things about this production is its gorgeous music. Ian Ross, multi-instrumentalist, composer and Kneehigh associate artist, has written an astonishing score influenced by everything from Klezmer to Tchaikovsky and plays it onstage with fellow band member James Gow. The melancholic and emotive sounds of the piano and cello, often enhanced by other instruments, suit the story perfectly. Bringing the melodies to life, Antolin and Maywood’s clear, powerful singing voices fill the production with everything from folk tunes to Ella Fitzgerald. The production begins with Antolin at the piano, gently singing ‘I’m Making Believe’. That sweet and simple jazz standard recurs throughout the show in different forms and hasn’t left my head since seeing the show. A particularly haunting duet between Marc and Bella sees them dancing around each other in the theatre where Marc, employed as a set-painter, is holding paintbrushes. Bella sings in Yiddish, Marc in English, of secretly desiring the other when alone ‘in my quiet hours’, in a tune full of soaring, piercing harmonies.

There are two moments in this wonderfully delicate two-hander that, together, eloquently sum up the depth of its exploration of the experience of loving someone. During the scene that portrays the couple’s honeymoon, Bella lays her face parallel to Marc’s and gently states, ‘we’re like opera glasses. We choose to look at the same things’. Much later, during the lonely moments in the life of an older, widowed Marc that frame the story, he realises poignantly while reading Bella’s writings that, though they looked at the same things, they saw them through different eyes. Filled with such openness and insight, The Flying Lovers of Vitebsk will be thought-provoking and strangely comforting to all who have ever been in love. I was still so lost in this play on the train home that I completely missed my stop!

Previous: Woman Before A Glass, Jermyn Street Theatre – Review
Next: How ‘Becoming Shades’ is Bringing Immersive, All-Female Circus to The Vaults