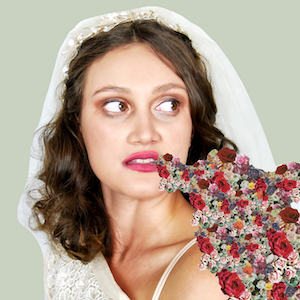 Pros: Elina Alminas, delivering a commanding performance as the jilted bride in a 60 minute monologue.
Cons: The play’s format demands audience participation, and people weren’t entirely certain how to react, which tended to slow down the story’s momentum.

Saturday night in the Oxford Arms was beginning to heave, so I was glad to enter the intimate confines of the Etcetera Theatre for Laura, the story of a jilted Eastern European bride.

Presented as part of the Black Box Festival, the play was last performed at the Camden Fringe in in 2017. Members of the audience were still ambling in with drinks in hand when Laura, played by Elina Alminas, entered screaming: ‘Come on, hurry up!’ Yes, the audience were guests at the wedding that never quite happened; voyeurs of a marriage that fails to launch, hanging around to survey the wreckage created by Johnny: the groom who didn’t show up.

Laura launched into a furious tirade against the hand life had dealt her. Her third failed romance denying her the happiness she sought. Alex and Angelo had let her down, but surely her beloved Johnny wouldn’t? He would, as it turned out, and she looked for answers among the guests. Who, what, where, why and how did Johnny do the dirty on her?

Laura found a willing participant to dance with her (thanks Vlad, I’m sure Laura was looking at me), hoping to make Johnny jealous and mournfully imagining the first dance at the wedding reception to their song, Slave To Love by Roxy Music. Laura got creative with the wedding cake, which had audience members flinching, started a singalong to I will survive by Gloria Gaynor, before realising she could still take the honeymoon to Bali without him!

The jilted bride screaming abuse at the guests is a well-trodden path, and Alminas certainly gave it some stick. But it bordered on immersive theatre and I sensed the audience weren’t prepared for that. Alminas picked on the guy behind me, who became Johnny’s best man, Martin. He wasn’t sure how to react when she asked where Johnny was. Should he say he doesn’t know, assuming Alminas will have a response prepared, or play along in the hope she will improvise? This uncertainty robbed the storyline of a real payoff. I wished for another character in the drama: a brother or cousin of Johnny’s with something of a back story. Having said that, it was great fun and a pleasure to spend time in the company of a talented actor; but just wish there was something to wrap the story up.

Written and Performed by: Elina Alminas
Booking: This show has now completed its run