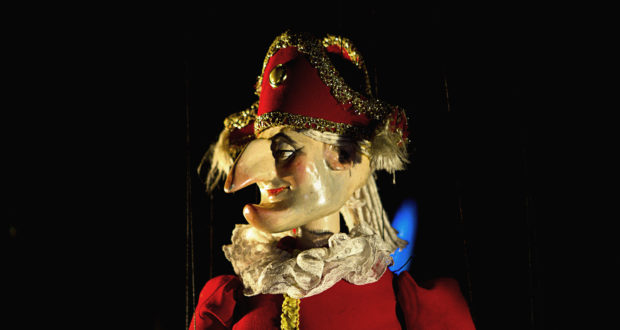 Pros: The craftsmanship of the puppeteers can almost be overlooked as their simplicity hides the skill involved in bringing them to such life.

Cons: It can be a little chilly at this time of year.
Joey’s Circus, Puppet Theatre Barge – Review

Pros: The craftsmanship of the puppeteers can almost be overlooked as their simplicity hides the skill involved in bringing them to such life. Cons: It can be a little chilly at this time of year. I could start by pointing out how Puppet Theatre Barge’s Joey’s Circus has some great character development, especially that of Punch, for so long portrayed on stage as a trouble maker, but here allowed to demonstrate his more caring side, using his cunning to thwart those wishing to close the circus.  Or I could be critical of the lack of depth for female characters;&hellip;

This is surely the most charming way to pass an afternoon, although you probably need a child to give yourself an excuse to go.

User Rating: Be the first one !
I could start by pointing out how Puppet Theatre Barge’s Joey’s Circus has some great character development, especially that of Punch, for so long portrayed on stage as a trouble maker, but here allowed to demonstrate his more caring side, using his cunning to thwart those wishing to close the circus.  Or I could be critical of the lack of depth for female characters; Judy has only a bit part, whilst Polly, the so-called star of the circus, is not allowed to develop on her promising opening scene in which she argues feistily with the villain’s henchman.

Of course that would be to completely miss the point. This is a children’s show, and should be viewed through the eyes of a child, not an adult whose next outing to the theatre will be the complete antithesis of this in The Exorcist! And through the eyes of a child everything about this is surely a joyous experience. From the sight of the barge moored along the canal in Little Venice (and later this year, Richmond), to the charm of the teapot on the counter, and of course the surprising sight that greets you as you step through the small door into the theatre space itself.

Because what surprises is just how much larger Puppet Theatre Barge is than it looks, or you could ever suspect. Instead of a slightly cramped, what you walk into is in fact a proper 50 seater theatre space with raked rows of soft benches.  What won’t surprise you is that in the middle of winter it is a little chilly. You are sitting under the water level in a metal box, what else can you expect? Luckily for those who feel the cold, there are blankets provided.

As you sit waiting for the to begin, you can admire the puppets hanging along the sides, or simply enjoy the chatter of the children all around you.  Yes, did I mention the children?  It is, after all, a children’s show, it’s going to be full of young children, get over it and don’t expect a silent audience.  In fact half the fun for us adults is hearing the little comments that only children can get away with.  “It’s too dark, I can’t see anything” was my personal favourite, immediately as the main lights dimmed, from a small child clearly not realising that the main lights have to go off before the curtain goes up.

So what of the story itself? It’s simple. Obviously!  A circus is in town but our villain doesn’t want it there, so does all he can to cancel it. The script is simple, but does seem to have a little line here and there that is more for the adult’s amusement than that of the children.  But ultimately, does the story really matter in the eyes of a young child?  What matters is the visual delight of seeing marionette puppetry so superbly executed. Even as an adult it’s impossible not to be in awe at some of the control of these finely crafted puppets. In fact I watched in wonderment at the juggler, desperately trying to work out how, with just a few strings, it was possible to have the puppet toss the ball onto its head in the way it did.  The children however seemed to prefer the simpler little treats, the loudest laughter coming from the balloon that “attacks” the mean-spirited doctor.

It’s just impossible to consider or review Joey’s Circus in the way you might consider adult theatre. Instead this should be taken for what it is, an incredibly unique experience that is aimed at children, but which truthfully, all us adults can enjoy and admire just as did the small children around us do.

Previous: Tumulus, The Vaults – Review
Next: Ken, The Bunker – Review

Review: 21 Round for Christmas, The Hope Theatre