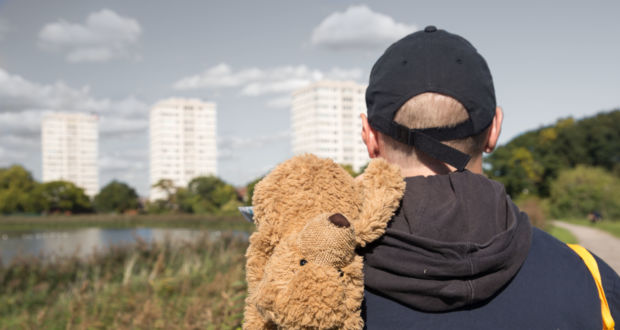 Pros: A fast-paced, engaging, thought-provoking and well-acted exploration of brotherly love and running away.

Cons: The ending could with a little more room to breathe.
FCUK’D, The Bunker – Review

Pros: A fast-paced, engaging, thought-provoking and well-acted exploration of brotherly love and running away. Cons: The ending could with a little more room to breathe. There's a Boy (Will Mytum) running through the streets of Hull. He's running away from home, away from his problems, away from himself. His dad's gone, his mum's drunk and his home's been deemed an unsuitable environment for raising a child. Faceless authority figures have arrived in cars to take his little brother Matty away. 'This is England' says the Boy. It’s an England that flits between cruel indifference and kick-your-head-in rage, an England where the only&hellip;

All elements of this production offer something creative and compelling to a thrilling hour of theatre.

User Rating: Be the first one !
There’s a Boy (Will Mytum) running through the streets of Hull. He’s running away from home, away from his problems, away from himself. His dad’s gone, his mum’s drunk and his home’s been deemed an unsuitable environment for raising a child. Faceless authority figures have arrived in cars to take his little brother Matty away. ‘This is England’ says the Boy. It’s an England that flits between cruel indifference and kick-your-head-in rage, an England where the only warmth and light emanates from the harsh flames of a burning car. In an England like that, you have to grab the only thing you care about and run, fast. Even if that special thing is a gobby little brother with his head stuck in a science book, who you don’t really know how to look after.

FCUK’D has a desperate, unrelenting forward momentum that is completely and utterly engaging. As the two brothers force one foot in front of the other, we are forced to keep pace with them, grabbing glimpses of moments bathed in Jess Bernberg’s cold, evocative lighting, or catching the rhymes in Niall Ransome’s refreshingly concise verse. Of course, there are moments of stillness too. Boy reflects regretfully on his past and we are reminded of those small mistakes, mistakes so small they could be deemed inconsequential and forgotten, or blamed on the ignorance of youth, but instead inexplicably haunt us forever. Even when looking back though, there’s a shuddering breathlessness to the meter that reminds us we need to keep moving forward.

So Will Mytum, the sole performer, is tasked with keeping up this pace while also finding the emotional depth that drives it. He succeeds at this admirably. Capturing the unique blend of vulnerability and aggression that makes a teenage boy, he fills the stage, pacing the playground-like markings of Grace Venning’s set with simmering sentiment hidden just behind a steely glare. He’s dealing with some big emotions, particularly in the last fifteen minutes as the narrative suddenly crashes into a high-stakes conclusion that’s borderline melodramatic, but he never once over-emotes or stops sharing with the audience. Instead he deftly switches between characters, with a portrayal of little Matty that’s simultaneously so sweet and also such a little so-so, it really feels as if this story belongs to both of the brothers. The moments when they physically interact are perfectly executed. When they play together the boisterous intimacy and loving laughter they share reminds us of how important and formative this relationship is, it’s why the Boy would risk so much to prevent meddling adults from altering it.

The element of danger the brothers face when they make the decision to run away from home is ever-present thanks to Peter Wilson’s music. The already atmospheric underground venue of the Bunker is filled with compositions that are never intrusive but are constantly ramping up the tension. The subtlety of the sound means that we are never quite sure if it’s humming away in the background or not, adding to the eerie sense of being alone on the streets at night, with too little sleep and too little light. Just like a night on the streets, this production’s ability to thrill is matched by its capacity to unnerve.

Previous: Beauty and The Beast: A Musical Parody, King’s Head Theatre – Review
Next: Interview: Alex Kanefsky on ‘Once Upon a Snowflake’