Home » Opinions » Dipping a Toe in the Edinburgh Fringe 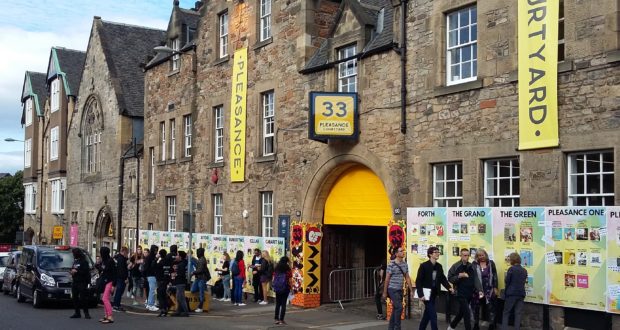 Dipping a Toe in the Edinburgh Fringe

When I arrived in Edinburgh on 22 August, the weather was as moody as I had expected it to be, changing from rain to sunshine and rain again during the short walk to my accommodation. A few months earlier, I had secured a room with the Network of Independent Critics and, for the first time in my life, I was about to experience the Edinburgh Festival Fringe.

That first day went in a flash and provoked mixed feelings of discomfort, fear and excitement. Luckily, I had a guardian angel looking after me, in the form of a veteran reviewer colleague who has been covering the festival for more years than he cares to remember. As soon as we met, he whisked me to my first venue, the Pleasance Courtyard, taking some backstreets and shortcuts that I was never able to find again. In the blink of an eye, he had asked information about the press tickets collection desk, found the right entrance to the venue (different
auditoriums are listed under the same name) and deposited me at the back of a queue that was waiting for the doors to open. ‘You should always ask people if you are in the right place’, he told me, ‘otherwise you’ll waste a lot of time.’ For the rest of my week in Edinburgh, I religiously followed his advice and I found it as precious as the many other tips he shared with me.

In a custom-made map, I also had pins for places to get a coffee and charge my phone

In the run up to my departure, I had done some thorough research, producing a detailed schedule which included the press release of the 17 shows I was booked in for, the address of the venues and even the walking distance in minutes between shows. In a custom-made map, I also had pins for places to get a coffee and charge my phone, and I had brought with me waterproofs and an umbrella, which I always carried in my bag. I soon found out, though, that nothing really prepares you for the wonderfully overwhelming energy of Edinburgh during the biggest performing arts festival in the world. Nobody had mentioned that I’d return home every day with my bag full of leaflets, that I’d have to cope with the steep and multi-layered nature of the city and that each wall in the city is lined with posters of the 2000 shows on offer. Edinburgh in August is like a bubble where everything you do, see, hear or think about
revolves around theatre and quickly becomes addictive.

In seven days, I saw shows that made me laugh and shed tears, left me cold or open-mouthed, awakened memories and inspired thoughts. There were days when I panicked about the number of reviews I had to submit, days I felt helpless after Google maps had sent me through a trekking route to find a venue, days I thought I’d never make it on time for a show and days I almost froze to death outside because I got there too early. On the plus side, there were definitely fewer rainy days than the weather forecast had led me to expect.

After a week that felt like a lifetime, I got back to London with a backlog of reviews to write and the underlying sadness of someone who is returning home from a challenging but unforgettable adventure.