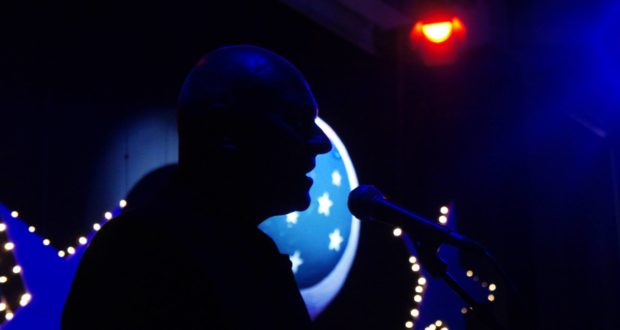 Pros: The audience. If you think that only rock stars have a loyal following, you haven’t been to the Crick Crack Club.

Pros: The audience. If you think that only rock stars have a loyal following, you haven't been to the Crick Crack Club. Cons: The stage. An arena auditorium would have facilitated the connection between performers and listeners. Once upon a time, a long, long time ago, humankind began its evolution. At that time, the first men and women would spend days away from home, hunting or picking wild fruits. At their return, the community would gather, perhaps around a fire, with the need to mingle and exchange experiences. Verbal communication was then considered the best way to do so,&hellip;

Dipping a toe in childhood and being allowed some naughty anecdotes is a privilege reserved for grown-ups.

Once upon a time, a long, long time ago, humankind began its evolution. At that time, the first men and women would spend days away from home, hunting or picking wild fruits. At their return, the community would gather, perhaps around a fire, with the need to mingle and exchange experiences. Verbal communication was then considered the best way to do so, with the increasing use of gestures and props to better recreate the situation. This is how theatre was born; exchanging stories was an entertainment for the long evenings, but also has other important functions, like sharing knowledge and strengthening the sense of belonging to a group.

Despite the introduction of writing and the subsequent technological progress, storytelling preserves to this day its bonding function and the power to create a unique connection between the speaker and their audience. This sense of community and shared presence was all-encompassing at the Crick Crack Club 30th Birthday Bash, which saw some of England’s best storytellers join Ben Haggarty on stage at Rich Mix.

Three decades ago, Haggarty initiated an ambitious project: taking storytelling across England, organising festivals and gaining residencies at some of the country’s most iconic venues, like Barbican, the Southbank Centre, the British Museum and Soho Theatre. To celebrate this special anniversary with him, each of the performers contributed a selection of tales from their personal repertoire, delighting an audience mainly composed of loyal followers.

Haggarty’s spooky story of a man stealing the boots from a frozen corpse leaves space to Clare Muireann Murphy’s romantic tale of a bachelor farmer, which is followed by Hugh Lupton’s curious snake and Sally Pomme Clayton’s blind salmon. Tim Ralphs with his ukulele is the company’s bard, Jan Blake and TUUP talk infidelity, beautiful women and creative lovemaking, whilst Daniel Morden recalls the myth of the oak and the linden. Accompanied by the sweet music of his harp, Nick Hennessey reveals that between the poet’s tongue and the listening ear there’s a wound but, with its 30-year long journey, the Crick Crack Club has definitely found a way to heal it.

Following the Caribbean tradition of engaging with their listeners by shouting ‘CRICK’, the speakers are echoed by an unisonant ‘CRACK’ and ‘HONOUR’ is always followed by ‘RESPECT’. The minstrels of our times still tour the country with a rich repertoire of enthralling stories, and words alone can’t describe the magic connection between them and their audiences.

If you wish to dip a toe in childhood again, but also want to be admitted to a darker side of the oral tradition, the Crick Crack Club is the place to be.