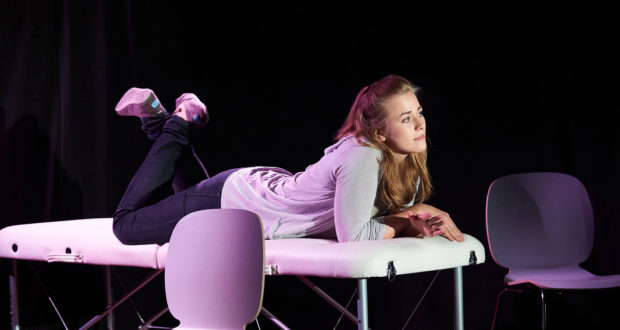 When singer and theatre maker Therese Ramstedt found out she was pregnant, she didn’t have any doubt on the next step to take. Unwilling to carry out her pregnancy, she discussed it with her then-partner, but she couldn’t bring herself to talk about it with anyone else. When she finally opened up with her mother, a month later, she realised how many people around her went through the same experience in silence. Ramstedt decided it was important to talk openly about it – and potentially contribute to making other women feel that it’s OK to do the same. The outcome of her creative effort is a one-woman show called Mission Abort, where Ramstedt relives her intimate drama from a tragicomic perspective. Occasionally requesting the help of some audience members, she recreates on stage some topical events, like the first conversation with her boyfriend, the consultation at the clinic and the actual surgical procedure, highlighting in detail its physical and psychological aftermath. Her powerful performance also features audio recordings of Donald Trump’s most infamous statements on abortion and a few heartfelt live songs. Mission Abort was a success at this year’s Edinburgh Festival Fringe before going on to headline the Amnesty International’s Festival of Choice 2017 in London. Marianna Meloni spoke with Ramstedt as she shared more of her personal memories and thoughts on the whole experience.

After your initial silence, when you didn’t even seek the support of your closest friends and family, was there anything in particular that convinced you to write and perform this play?
For as long as I can remember, I found pleasure or inspiration in the writing process, and I’ve always used fictional or dramatic writing as a way to express myself. In my teens, instead of keeping a diary, I would write fan fiction. This has always been my process of dealing with anything and an easy way of letting things out. So even before I knew that it was going to be a play, I decided quite quickly that it had to be written.

Also, when I started talking about it, I found out about so many women in my surroundings who had the same experience and, even now, people I’m vaguely acquainted with get in touch to tell me about their experiences. All of a sudden, writing this play has resulted in them telling another person what they went through – which was sad, confusing, whatever it was and however they felt about it. But [it was] something they felt they could never talk about, despite it had affected them as it happened.

Beyond the personal level, your work also has a strong political message. You quote Trump and mention the case of Northern Ireland. When you started writing it, did you realise this political potential and its relevance in the wake of the current termination policies enforced on both sides of the Atlantic?
I started writing the play before Trump was elected president, and then things kept happening. I obviously knew it was politically relevant, even though it is deliberately from a very personal perspective rather than political. We talk so much about the politics around it but we don’t talk about the human experience. When we make films or write plays about other big issues – like wars, for example – we often do that from an individual perspective, highlighting the protagonists’ experience of it. Even a film like Vera Drake – which is about a woman who provided abortion services before they became legal – is mostly about the woman who provides the service and not so much about the women who go through it. When abortion is addressed in arts and media, so often women are either victimised or criminalised, and I really didn’t want to do [any] of that.

As for its political relevance, it has just become more and more topical, especially after Trump and the DUP, although I can see some good things happening as well. Northern Irish women can now make use of free NHS services in England, and Ireland is having a referendum next year about the Eight Amendment.

Mission Abort is a play mainly about the physical and psychological aftermath of having a termination, which you found being the most painful phase to go through. For this reason, the separation with your former partner is only briefly mentioned and his role merely functional to the evolvement of your personal drama.

In hindsight, do you think that attending some sort of counselling sessions would have helped the man to better understand your needs and offer you more moral support, regardless of the outcome of your relationship?
A lot of abortion clinics offer counselling to men, but my partner at that time, for example, didn’t feel he wanted to talk about it or have counselling, which, of course, I had to respect, as his process was and remains his own. One of the reasons why the play happened is because I realised that if women don’t know what this experience is going to be, before they go through it, men cannot be expected to understand it either. Men won’t get told what it feels like, especially if women aren’t told about the physical and emotional implications either. It is a lot of responsibility to put on a man, if we don’t even expect women to understand.

A lot of male friends of mine have seen the play and said that they now [have] a new understating of something that they’d never thought about. We probably could and should offer better support to men as well and involve them more but, realistically, at the moment there isn’t even enough support for women.

What sort of feedback did you receive during your Edinburgh run? Were there any reactions you didn’t expect?
Audience feedback and response have been wonderful and I’m really overwhelmed. We had some fantastic audience members, including a gentleman in his 70s, who came up to me afterwards to say how fantastic the show was. Then I met him again the next day, whilst I was flyering, and he offered to help me for a few hours. Some older ladies came to see my performance because they had worked with abortion clinics, possibly from the very time it became legal. In fact, another reason why I decided it was a good timing for this show, is that 2017 marks the 50th anniversary of the legalisation of abortion in England.

Some conversations I had during flyering were quite interesting, too, and there have been some reactions I didn’t expect. When we explained what the play was about, many people laughed in an uncomfortable and dismissive way. That wasn’t expected. I just expected people to say no or that they didn’t want to see anything related to the subject of abortion, because they don’t believe in it. The unwillingness to even talk about it was sometimes surprising, because there were more instances than I thought there would be. Once, I told this middle-aged couple about the play and the woman turned to the man to say, ‘You wouldn’t fancy that, would you?’, before giving me the flyer back.

Following your most recent performance in London, at the Amnesty International Human Rights Action Centre, you and producer Courtenay Johnson suggested that the show might receive a further development. Can you give us an idea of your future plans for the piece?
We are currently in conversation with venues, touring companies and festivals. Most likely, there will be a tour in Sweden next year and a longer London run in the spring.

Because it is so informative and in many ways educational, I’d love [to present] the play in other contexts, like the Festival of Choice, also as a part of a wider context, like feminism or human rights. I’m looking also at how I could offer it for free, staging it in places where I get a fee but audiences don’t pay. I might even think about adapting it for radio, video or as a podcast.

With this exciting perspective, I say goodbye to Therese, who found some time for me between a children workshop and a rehearsal, wishing her the best of luck for all her future projects.