You can use WP menu builder to build menus
Home » Features and Interviews » Interview: Maggie Norris of The Big House on ‘Phoenix Rising’ 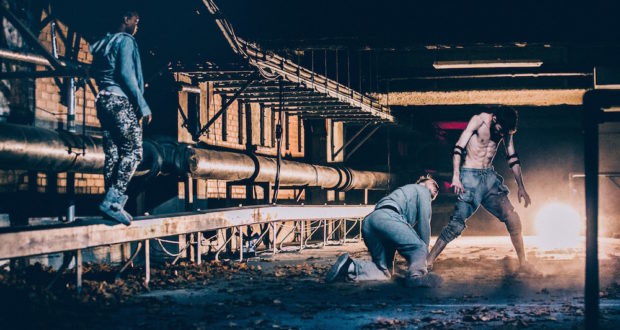 Interview: Maggie Norris of The Big House on ‘Phoenix Rising’

Founded by Maggie Norris in December 2012 to offer care leavers the opportunity to learn new skills and improve their well-being, The Big House has played a life-changing role for many young adults. During an 18-month programme, the charity devises an intervention tailored around its participants, which involves the writing and staging of a new play with the support of professional playwright Andrew Day. The company’s latest production, Phoenix Rising, is a revisited version of their 2013 debut work Phoenix, and is currently running at the Smithfield Car Park. Everything Theatre writer Marianna Meloni spoke with Norris to learn more about the charity and its newest theatrical work.

Working with around a hundred young adults every year, The Big House programme starts with weekly drop-ins where the facilitators can get to know each case and devise the right approach for them. This is followed by a three-month intensive workshop that involves 30 to 40 participants and culminates with a play. During this time, a variety of topics are included as part of the theatrical activity, from healthy living and budgeting to gang exit strategies.

‘We try to keep the numbers contained because we want the intervention we provide to be successful,’ explains Norris. ‘If we get too big, it’s very hard to turn around a young person’s life and we don’t want to offer a superficial fix. Getting to know somebody and designing a program to fundamentally change what’s happening requires a lot of energy and focus.’

The end of the play, Norris notes, concludes a six-month journey for its participants, which is then followed by another twelve months of support as the participants embark on further education or employment. ‘Because many of those who join us are isolated, may be living in a hostel and may not have many friends, we grow a community and we build a peer support within each group,’ Norris says. ‘We try not to create a dependency culture, though, and if the participants want ongoing support after 18 months, then they need to help us. They may bring up other young people or help with the drop-ins and the drama facilitation. They may also get paid employment through The Big House Means Business, which is an arm that we’ve recently developed and where our young people who have been on transformative journeys go out into the social care world or the corporate sector to deliver workshops around empathy and change.’

High-profile clients of Norris’s workshops include Barclays, whose senior leaders were shown how young people who had been written off by statutory services blossomed in the environment created by the charity. ‘It’s all about the support you give and understanding the people you’re working with, which translates very well into the business world. If you fall into the trap of judgemental thinking about why someone is behaving the way they are, rather than actually understanding human behaviour, that cannot lead to a fruitful collaboration,’ Norris says.

So how has The Big House enabled troubled young people to blossom? Norris points to the case of a girl who was headed towards eight to ten years in jail for heroin trafficking. ‘Her and her single parent, who had mental health issues, were about to be evicted and her bills weren’t being paid, when a local gang recruited her to traffic drugs,’ Norris elaborates. ‘She shouldn’t have been in that position of vulnerability at that young age. Therefore, I put together quite comprehensive documents for the judge to read about what I felt that we could achieve, and he decided to give her a chance. Having never acted before, she revealed herself to be an incredible talent, which we supported, and is now doing incredibly well. She could have gone to prison and that would have cost the British taxpayers at least 40,000 pounds a year.

‘Another youngster on the same project was homeless when they joined us and is currently studying politics at Goldsmiths,’ Norris adds.

The Big House’s work has been recognised with the Born to Be award from the Centre of Social Justice, an achievement of which Norris says she’s ‘particularly proud’. Another experience for the charity that Norris specifies as a major achievement was when its work Knife Edge was thrust on to one of London’s most renowned stages, the Royal Court, and the theatre ‘allowed 15 unaudited youngsters to perform.’

Talking more specifically about their current production Phoenix Rising, Norris mentions one of the challenges was turning the original female lead into a male character, whilst trying to preserve the same level of connection with the audience. ‘Having an angry young man, with the audience going on a journey and really falling in love with him, as they need to, was a risk,’ Norris said, adding about the role’s performer: ‘Aston hadn’t really acted before, except for a scene once, but he’s a young man with huge talent and a massive heart. He’s had his own problems and seeing him blossom on this journey, as he found his character and made it his own is really exciting.’

This revisited version of The Big House’s debut production, Phoenix, is presented in memory of one of the original cast members, who Norris describes as being ‘instrumental in the development of this play, because he was a young man who was diagnosed with Multiple Sclerosis and wanted people to understand that this is also a young person’s disease.’

However, Norris notes, ‘Phoenix is not just about MS, but also about a young person who’s flailing out of control, who’s angry, who’s lost his way, who’s carrying a lot of baggage as a result of his childhood and is lacking support. In Phoenix Rising, we wanted to pay tribute to Kieran’s life, showing a caption of his very mischievous, playful spirit, and the best way we could think of was to revive this production. We reworked it because it’s a new set of young people who are performing it and we wanted it to reflect their feelings as well.’

As for the enormous success the charity has attained amongst audiences, critics and theatre-makers, Norris points to the importance of making them appreciate the energy and the power of the untrained actors involved in The Big House’s projects. The best way to feel the participants’ potential, according to Norris, is by being amongst them. That’s why the charity’s theatrical model rejects the traditional relationship found in a theatre, with a stage and an audience sitting down.

‘This doesn’t suit young people, so we don’t ever want to present them in that way,’ Norris says about the traditional theatregoing experience. ‘There is a ferocity and a rawness in their energy which is infectious, and they input [that] into the development of the story. Not with their personal lives, because we safeguard that, but in terms of their experience and their creative energy. The result is very fresh and very real.’

The choice of the unusual setting of the Smithfield Car Park allowed Norris, who also directs each project, to immerse the audience into the same sense of discomfort experienced by Phoenix Rising’s characters. ‘I wanted to find a space that gave me the opportunity to have a 100-metre running track, because that’s at the heart of the play, but also I wanted the audience to walk into an alienating space, because it’s a tough and dark story. It’s funny and there are moments when we all laugh, but we cry too,’ Norris explains.

‘I wanted the audience to feel that level of unease and discomfort that the central character is facing, and the car park gave it to me the moment I walked in. You haven’t got a box office, a nice bar and plush red seats, you’re actually going on the journey with Callum as he’s being ricocheting around from placement to placement.’

Many of The Big House members have been with the company since its opening and are now mentoring the newcomers. Some others have moved out of London, but still keep in touch with what they see as a large and supportive family. Currently, the charity’s range of action is mainly limited to London, but Norris says the charity hopes to replicate the model in different towns. ‘There are so many care leavers in Great Britain, it might be going up to 90,000, with 10,000 leaving care each year. Really getting The Big House established across Britain is a dream,’ confesses the director. ‘We’re starting to reach out and we’re going to do a tour with a couple of our plays and workshops, but there’s a lot of work to be done in London first.’

The charity’s ‘main plan for the future is to find a new home, which could provide more space and a stronger sense of identity for the participants,’ Norris says. ‘To do so, The Big House relies upon donations and the goodwill of people who wish to collaborate on voluntary basis.’

At the end of our chat, I thank Maggie Norris for taking the time to meet me and I compliment her relentless and inspiring work, to which she responds with a long and heart-warming hug. She really is one of the most inspiring people I met in my life.

The Big House’s production of Phoenix Rising is currently playing through 2 December.