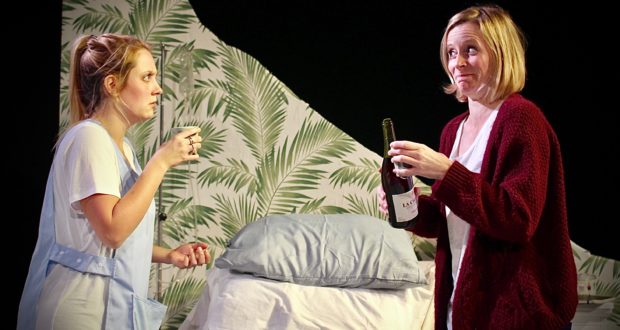 Cons: A feminist subtext undermining the impact of the story, and distressing subject matter which may be off-putting for some.
No Place like Hope, Old Red Lion Theatre – Review

Pros: A surprisingly bright, heart-warming tale told without sentiment or self-pity. Cons: A feminist subtext undermining the impact of the story, and distressing subject matter which may be off-putting for some. In a world bruised and battered by violence, do we really need to see a play depicting death in a hospice? We are confronted by reality the moment we open a newspaper, flick the TV switch or go online. So what could No Place Like Hope possibly offer an audience expecting an evening's entertainment? The set at the Old Red Lion Theatre is simplicity itself; a bed and two&hellip;

Portraying a terminal illness while maintaining some degree of entertainment is always a tough call, but they just about pull it off.

User Rating: Be the first one !
In a world bruised and battered by violence, do we really need to see a play depicting death in a hospice? We are confronted by reality the moment we open a newspaper, flick the TV switch or go online. So what could No Place Like Hope possibly offer an audience expecting an evening’s entertainment? The set at the Old Red Lion Theatre is simplicity itself; a bed and two bookcases flanked by wooden partitions representing the outside world, and the story tells of Anna, who is terminally ill with cancer and spending her final days in a hospice. Becca is an impish, opinionated cleaner, forced to do community service at the hospice, while Brian is the officious care assistant trying to keep both patient and miscreant in line.

As Anna contemplates her final days, Becca becomes a trusted friend and companion, as they join forces to score points over Brian. Becca fails to understand how Anna can cope without visitors or TV, and just making do with two dusty bookcases for company. Anna soon realises Becca is the best palliative care she could ever receive, and this becomes the strongest message in the play: even in our most desperate moments a sympathetic ear can ease whatever pain we might be suffering. The script is bright with a smattering of genuinely funny moments.

Strangely, Becca’s back story is much clearer than Anna’s, which would really benefit from more detail. It’s never properly explained why Anna has chosen to be alone at the end of her life. This may be something to do with the writer’s adherence to the Bechdel Test, which requires a film or play to feature two female characters who must talk to each other for two minutes about anything but a man and, apparently promotes equality and gender balanced casts. Well, this play certainly passes the Bechdel Test, but in the process creates one dimensional characters with no real depth. The publicity material sets an overtly feminist agenda, raging about gender imbalance and sexism in the arts. It further states that women are often set up to fail in the industry. It all feels very angry and confrontational, and detracts from what is actually a well delivered play. The production’s partnership with Victoria’s Promise, a charity that supports young women with cancer, feels like a much more natural alliance.

The cast keep the story ticking over with Clare Corbett as Anna, Holly Donovan as Becca and Max Calandrew as Brian. In spite of the thinly drawn characters, this is good story-telling weakened by unnecessary political posturing. The play is worth a look, but give the publicity material a miss.