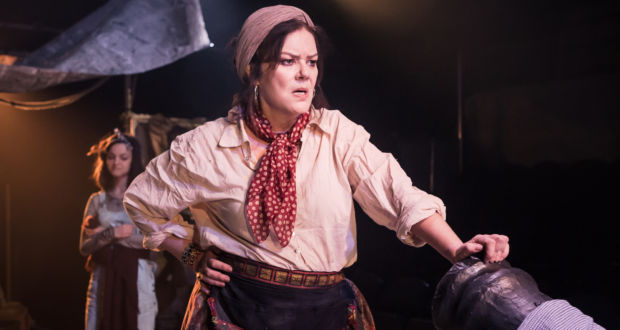 Cons: Can be hard to hear the singing, and with a runtime of 150 minutes it’s a bit long.
Mother Courage and Her Children, Southwark Playhouse – Review

Pros: Fascinating central performance supported by a strong ensemble. Cons: Can be hard to hear the singing, and with a runtime of 150 minutes it’s a bit long. This morning, browsing Facebook, I watch President Donald Trump addressing North Korea: 'Do not underestimate us and do not try us.’ Do not try us. Stark words. A leader ready for war, a country willing to risk complete devastation. For a moment, images of a nuclear holocaust fill my mind. I scroll downwards and watch a video of a cat falling over. Mother Courage and Her Children at the Southwark Playhouse&hellip;

Josie Lawrence leads the cast in a production that confronts us with the reality of war while keeping us entertained.

This morning, browsing Facebook, I watch President Donald Trump addressing North Korea: ‘Do not underestimate us and do not try us.’ Do not try us. Stark words. A leader ready for war, a country willing to risk complete devastation. For a moment, images of a nuclear holocaust fill my mind. I scroll downwards and watch a video of a cat falling over.

Mother Courage and Her Children at the Southwark Playhouse presents a compelling anti-war rhetoric. The threat of war should not be a morning routine. War is not casual. It’s not something you can learn to live with, nor can you make a life within it. You can succumb to it, profit from it even, but by that point you’ve already lost everything. You just don’t know it yet.

We’re in a tent, or a bunker. A tense soldier guides us to our seats. A child is playing on the floor. It feels like we’re being sheltered, momentarily, from a war that’s raging just outside this room. The child’s toys are swept aside and suddenly the show has begun. The war is in the room with us, but there’s music and dance and the actors acknowledge our presence. We’re still playing.

Mother Courage drags her wagon of useful junk through a land laid waste by war, with her three children in tow. It’s not clear whether these children are a help or a hindrance when it comes to Mother’s ultimate goal: profit. As Mother, Josie Lawrence embodies many roles. She’s a showman, a clown, a wheeler-dealer and a legitimate businesswoman. But these are all exterior; when they slip away we see the role that defines her at her core – she’s a parent. In wars, parents lose children. She screams, silently. It’s a fascinating performance.

Other highlights from the ensemble come from two great comedic turns. Laura Checkley dazzles as Yvette, the prostitute with lofty ambition and a mind for manipulation. Meanwhile Julian Moore-Cook’s smiling naivety as Swiss Cheese has us fully believing that, as a boy, Mother taught him to be honest, not clever. The rest of the cast ably populate this world with all the faces you expect to see in war. There’s corrupt generals and the peasant farmers they tread on, a lusty cook, and a chaplain who might be just as lusty but better at hiding it. Some of the cast bring a little more depth to their characters than others.

The live music is fun, though it can be hard to hear the singing. The musical numbers are used sparingly and so they’re a welcome addition rather than an overbearing presence. The raggedy costumes with modern touches help us to understand that, while Brecht’s text was set in the Thirty Years’ War, in the spirit of his message this production aims for something more timeless.

It’s a long old journey and there are few surprises as things go from bad to worse, but it’s still a journey very much worth taking. The modern superpower of the theatre is that you can’t scroll away to a video of a cat falling over, and that’s important here. When you’re forced to witness the creeping, squalid desperation that slowly engulfs Mother Courage, you’re reminded of how much you’d rather it didn’t engulf you.

Previous: The Red Lion, Trafalgar Studios – Review
Next: Win a pair of tickets to see Macbeth at The Courtyard Theatre