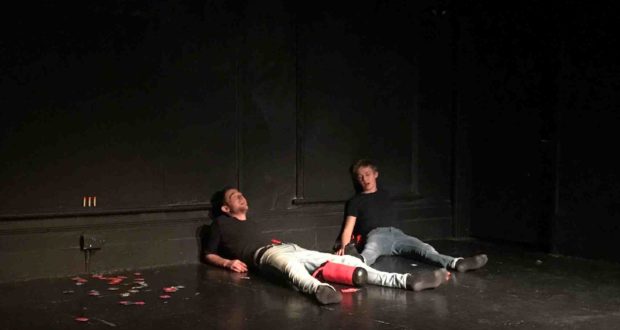 Pros: Flickers of potential in the physical moments within Hommo spark some intrigue in the concept of the piece.
Cons: Quite an impenetrable script, an audience member can be left feeling isolated.
Hommo, The Lion and Unicorn Theatre – Review

Pros: Flickers of potential in the physical moments within Hommo spark some intrigue in the concept of the piece. Cons: Quite an impenetrable script, an audience member can be left feeling isolated. Hommo begins well: two young men having a dance-off. The floor is littered with (unopened) condoms and toy guns . . . Curiosity is aroused. The dance-off emulates the promised theme of the play: an exploration into masculinity. As one actor slowly manages to dance the other into a corner using the infinite Power of Flexing Shapes (my description, not theirs), the lesser-flexer is left crestfallen. This&hellip;

A play that feels lost in translation. The writer clearly has a lot to express, but the text needs more workshopping to communicate its motive to an audience. Hommo feels a bit insular and needs to be made a lot more accessible.

Hommo begins well: two young men having a dance-off. The floor is littered with (unopened) condoms and toy guns . . . Curiosity is aroused. The dance-off emulates the promised theme of the play: an exploration into masculinity. As one actor slowly manages to dance the other into a corner using the infinite Power of Flexing Shapes (my description, not theirs), the lesser-flexer is left crestfallen.

This emotionally intelligent, thoughtful dance piece should have paved the way for the rest of the performance. The show is the story of two male friends, but it is not that simple. Throughout Hommo, both their relationship to each other and their relationship with women (albeit more obliquely) are explored. The show is interspersed with physical theatre, in which lies its strength. Unfortunately, the script lacks coherency and purpose. I have thought a lot about the play in the wake of seeing it, trying to figure out if there was something I was missing, but I think that in this case, Hommo is well intentioned but needs a lot more development.

I could see that the play was exploring masculinity, but I couldn’t suss out quite what the point was. The show is marketed as a look into the ‘eroticism of masculinity’, but the author needs to unpack this within the show. Each scene feels disconnected from the next, and therefore Hommo might benefit from going back to basics and laying a coherent narrative. Not all plays need to have plot, but they do need to have a thread that takes the show from beginning to end. This may sound obvious, but this play hits home the need for this rudimentary but crucial element.

There are half-formed plot threads that aren’t executed properly; for example, at the beginning one of the characters talks about killing a girl he is dating, but there is little to no explanation as to why. Much of the script infers that the audience has an inbuilt empathy to its purpose, but it would be far more effective to provide clear motives. The dialogue is a little purposeless. It sounds like it should be poignant, or full of intrigue, but it doesn’t really do much in the way of building a sense of character or a narrative. It sounds like it is trying to be philosophical, even academic, but hasn’t taken the elementary steps to create something engaging.

Erik Alstad and Sam Ebner-Landy provide committed performances, but the lack of characterisation prevents them from really owning their role. I admire them for pulling such strong performances out of the text, and again, the direction in the physical parts is marvellous and both actors shine in these moments; the duo has stage presence in spades.

Going forward, I hope that Hommo undergoes some transformations so that it can better communicate its intentions. Vague theatre sometimes works, there are successful pieces born out of movement alone, and the beauty of the theatrical art form is that the staging of a play can make it come to life . . . but (big but!) there needs to be an awareness of the audience and how they will follow the narrative. I cannot truly say that I ‘got’ the play, but a spectator should not have to work this hard. There are flickers of something wonderful within the play: there is a scene depicting one of the actors showing the other how to hold a gun, for example. It is sexually motivated and interesting, turning one version of masculinity on its head to form another. If these moments could be revisited by the author, and made as part of one comprehensible motive, there might be something wonderful about the concept of Hommo.

Author: T. Froy
Produced by: Lion and Unicorn Theatre
Booking until: The show has now finished its run