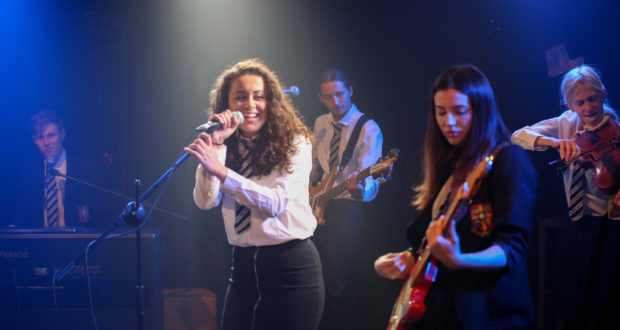 Cons: The political references are meaningful but need to be more clearly articulated.
The State of Things, Jack Studio Theatre – Review

Pros: Engrossing and catchy . . . I'm still humming the intro! Cons: The political references are meaningful but need to be more clearly articulated. Set in a school's music room, The State of Things tells the story of seven 16-year-olds who discover that their music course has been removed from the list of  A Level options. All talented and dedicated musicians, they start thinking of possible ways to get their headteacher, Maggie, to reconsider this decision, before realising that the issue is a direct consequence of nationwide financial and political manoeuvres. After a failed attempt to meet with the&hellip;

An unusually truthful glimpse into the hopes and concerns of teenage years, written by two young and promising creatives.

User Rating: 3.95 ( 5 votes)
Set in a school’s music room, The State of Things tells the story of seven 16-year-olds who discover that their music course has been removed from the list of  A Level options. All talented and dedicated musicians, they start thinking of possible ways to get their headteacher, Maggie, to reconsider this decision, before realising that the issue is a direct consequence of nationwide financial and political manoeuvres.

After a failed attempt to meet with the local MP and the dashed hope of creating a social media storm, the teenagers are forced to accept the current state of things and move on. But, whilst some of them can still pursue their dreams by changing school, the others don’t have access to the same opportunities and are forced to review their prospects.

This original story, written by Thomas Attwood and Elliot Clay, is quite timely, as a quick Google search returns dozens of headlines announcing imminent cuts to arts-related disciplines in state schools. As often happens in an austerity climate, scientific subjects and technical skills are privileged over creative and artistic crafts, despite the potentially detrimental effect on pupils’ future career and personal development. In this regard the creatives have a strong point to make, but the delivery of the political message relies on a few monologues that, when compared to the rest of the work, don’t feel well enough articulated.

This social engagement, though, is just one of many aspects that join into a well-rounded piece of musical theatre, where great comedy and urgent topics are combined with an artful selection of really good songs. The sources of inspiration span from Barry White and the Rolling Stones to younger and more uplifting pop bands, for a top-notch and inventive production.

Ben Jacobs’ lighting is finely-tuned to the mood of each song. The auditorium goes from purple hues for the soulful Love Letters to a proper rock concert display of spotlights for Maggie, followed by subdued tones for the melancholic In This Town.

If analysed with the musicals’ checklist in hand, there’s a noticeable lack of proper choreography, but this is effectively balanced out by the performer’s impressive ability to rotate in playing all the instruments. Hana Stewart’s execution of The Invisible Girl brings the house down and, even when the acting skills could be strengthened, the young musicians’ craftsmanship is so remarkable that all shortcomings are promptly forgotten.

There are plenty of laugh-out-loud moments in this brand-new musical, but there’s also the suggestion that, at their age, life is a jump in the dark and love is ambitious but not enough ripe to be achievable. Sexual identity is another weighty dilemma within the group but, in the plot, it doesn’t receive the attention it deserves. Perhaps this will be addressed by the creatives, if they decide to venture into a full-length version of what’s now a 90-minute single-act.

In charge of the music and lyrics, Clay is a young artist to watch closely and, after you go to see his debut musical at the lovely Jack Studio Theatre, don’t be surprised if you’re singing the opening, Left Behind, for many days to follow!