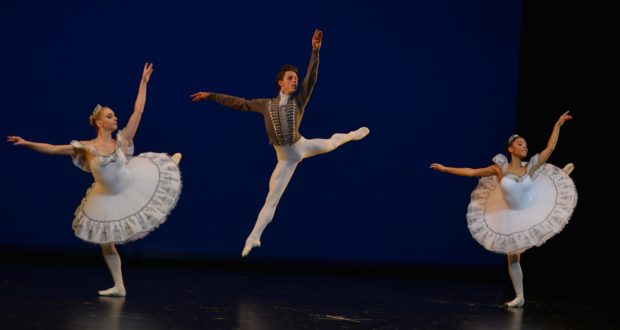 Pros: An opportunity to see some of the greatest ballet dancers alive today.

Pros: An opportunity to see some of the greatest ballet dancers alive today. Cons: An uneven billing, with sound issues, and a rowdy audience. If going to the theatre with 900 screaming school children isn’t your thing then it’s fair to say you wouldn't have enjoyed Romantic Revolution, which was in part a fundraising and promotional exercise for London Russian Ballet School. Based in Lambeth, this is a vocational school which trains and educates students up to age 18 in the Russian ballet training method. It has a strong outreach programme, bringing performances into schools in Lambeth and neighbouring boroughs,&hellip;

A unique evening at the theatre. The objective of bringing ballet to a more diverse audience is achieved, but possibly at the expense of a well put-together evening.

If going to the theatre with 900 screaming school children isn’t your thing then it’s fair to say you wouldn’t have enjoyed Romantic Revolution, which was in part a fundraising and promotional exercise for London Russian Ballet School. Based in Lambeth, this is a vocational school which trains and educates students up to age 18 in the Russian ballet training method. It has a strong outreach programme, bringing performances into schools in Lambeth and neighbouring boroughs, and offers financial support to the majority of its students. Their not so secret weapon is that they have close ties with the Bolshoi Ballet, and in addition to showcasing students, tonight’s programme featured guest turns from four of the company’s principal dancers. Bolshoi means ‘great’ in Russian, and these dancers are absolute masters of their art – worth the ticket price alone.

The evening was a fascinating insight into the world of ballet, and a testament to the school’s mission to reach a more diverse audience. I had to fight my way through a chaotic foyer rammed with excited children and their teachers, mingling with wealthy Russian families and seasoned ballet enthusiasts brandishing binoculars. The lights went down fifteen minutes late to a huge scream of excitement from the children present. I have never experienced anything like it.

The mixed bill took in contemporary and new work as well as classic dances. The interspersing of student dances with star turns by the Bolshoi dancers made for an uneven experience, beginning uncertainly with a trio of students in an extract from Swan Lake. The first Bolshoi dancer was Seymon Chudin, dancing a contemporary, haunting solo set to music by Philip Glass. The solo itself was sparse and dreamy, with gorgeous lighting and a strong spot lit ending. This was followed by a spirited ‘Gypsy’ from Don Quixote danced joyously by Megan Vain. Next up was the Bolshoi’s Krysanova in ‘Cinque’. Formidable in a glossy black tutu, her movements were fiercely accurate as she threw herself off-balance and deliberately distorted her movements like a malfunctioning automaton.

The newest students at the school performed ‘Romance’ choreographed by artistic director Goremykin. A simple, lovely dance with scarves was a tender showcase for nervous young dancers who moved well as an ensemble and kept their focus as the well-meaning audience applauded prematurely, twice. Act One finished with the spectacular ‘Pas de Deux’ from Raymonda, danced by Alexandrova, and Lantratov, who was princely in a long blue cloak, and had the majestic jumps to match.

Act Two began with ‘Paquita’, featuring one of the stand-out students of the evening, Cassandra Adu-Tei. Technically accomplished, with neat, light footwork and a vivacious presence, she was a pleasure to watch. She also happened to be the only dancer of colour on the bill, and no doubt will be an inspiration to the children watching, who were conspicuously more racially diverse than the cast. Inevitably however, the Russian principals stole the show, with their musicality, power, and unabashed expressivity. Krysanova whipped the audience into a frenzy as she executed turn after perfect turn – it really was thrilling. As I left the theatre there were children dancing in the aisles. I hope the Bolshoi inspire them to greatness in whatever they choose to do.