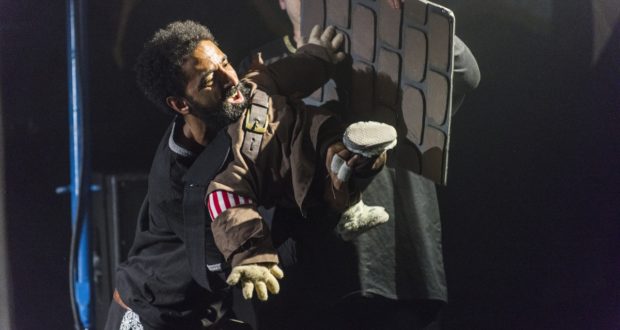 Pros: An admirable cast working miracles with a weak script.

Pros: An admirable cast working miracles with a weak script. Cons: The 10pm start time wasn’t particularly helpful and the late finish gave the journey home a ‘last train’ feel. The Charing Cross Theatre has enviable status as it can stage both legitimate West End productions and fringe-based theatre. They’ve currently got both bases covered, as Jack Rosenthal’s The Knowledge plays the evening slot while Graeme of Thrones occupies the nightshift. 10pm is a ridiculously late time to begin a performance; just as most people are pouring out of shows that have finished and heading home. But, if proof&hellip;

Although predictable and lacking in subtlety, it’s still great fun both for the audience and cast.

The Charing Cross Theatre has enviable status as it can stage both legitimate West End productions and fringe-based theatre. They’ve currently got both bases covered, as Jack Rosenthal’s The Knowledge plays the evening slot while Graeme of Thrones occupies the nightshift. 10pm is a ridiculously late time to begin a performance; just as most people are pouring out of shows that have finished and heading home. But, if proof were ever needed that London never sleeps this is it; a huge queue was building outside Heaven nightclub and an almost full house piled in to see a parody of the biggest show on TV.

If anything, the late start helped the show as the audience merrily bought into this glorious mix of cabaret, panto and slapstick. It soon became apparent how most members of the audience had passed the time earlier in the evening. But it only served to heighten the atmosphere, as the show inevitably started late to allow for set adjustments.

The plot (if you can call it that) revolved around a theatre company, Lannister Productions, pitching an abridged version of Game of Thrones to an audience of potential investors. The hapless but likeable Graeme, played by John-Luke Roberts, has got Ned Stark and Robert Baratheon off to a tee. However Briony, played by Nicola Lamont, is struggling to inhabit a plethora of female characters including Sansa Stark and Daenerys Targaryen. Paul, played by Ross Spaine, is the props and special effects man, but is desperate for a proper role and he’s not fussy. Animal, vegetable, or mineral: anything will do as he’s got a costume for every occasion.

The show’s construction owes much to The Play That Goes Wrong and to a lesser extent the Reduced Shakespeare Company, as it tries to shoehorn seven seasons of ‘Thrones’ into a frantic ninety-minute presentation. It also draws inspiration from old style farce, particularly the work of Ray Cooney and Michael Frayn. However, I wonder how they as expert practitioners would have viewed this effort? Whilst the gags were well delivered, you could see them turning the corner into Northumberland Avenue. Bawdiness was used more as diversionary tactic than a stab at real humour.

Frankly, the plot could have been written on the back of a beer mat; the dialogue was lifted from the TV show and sufficiently twisted to steer clear of legal misdemeanour. The running gag that HBO’s lawyers were watching didn’t really work for me. Any perceived copyright infringement would not have troubled them one iota; it’s more publicity they don’t have to pay for. But I’m still not sure why it took three writers (+ script consultant) to pull this show together?

Yet again, my phobia of planted stooges reared its ugly head, as Briony reenacted the mortal combat scene with a volunteer from the audience. ‘Steve’ was handily placed in the front row and jumped on stage for his fifteen minutes of fame. Or was it? Steve: six foot four, 15 stone, shaven head with a red beard looked strangely familiar to me. Now I’m not suggesting that Steve has appeared in Game of Thrones, but what an incredible stroke of luck to find him when needed? Of course it’s easy to pick things apart from the comfort of a seat in the stalls. But it’s amazing what you can get away with; provided you’ve got a good cast who can make effective use of props. Well worth a look if you’re in the vicinity and fancy staying out a bit longer.