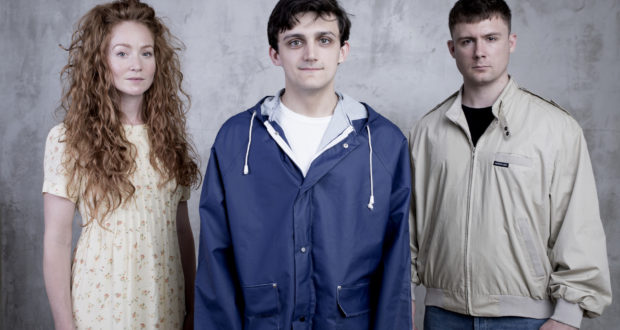 Since graduating from the Arts Educational School in 2013, Danny-Boy Hatchard hasn’t shied away from a challenge on stage and on television. He spent three years on our screens as troubled Lee Carter in EastEnders, where his storylines included workplace bullying, depression, debt and being accused of murder.

Meanwhile, his stage roles have taken him to the Arts Theatre and Regent’s Park Open Air Theatre, and he squeezed in a series of jazz gigs at London’s legendary Brasserie Zedel reviving classic Frank Sinatra songs. He now takes on the role of domineering teenager Aaron in Alex Gwyther’s new play Eyes Closed, Ears Covered at the Bunker Theatre. I caught up with Danny-Boy to talk rehearsals, mental health awareness, and moving from ensemble pieces to a much smaller cast.

This play sounds very different to your last role (playing Dodger in Oliver Twist at the Regent’s Park Open Air Theatre) – it’s set in the 80s, it’s raw, and aimed at an older audience. Were you deliberately looking for a change in direction after a family-friendly role?
Absolutely – I think, as an actor, it’s important to stretch yourself as far as possible by allowing new challenges to present themselves; it allows you to grow and improve your craft. Comfort is never a good place for an actor. I feel it’s good to keep learning and discovering new things.

There’s another big difference from the ensemble cast of Oliver Twist – Eyes Closed, Ears Covered has just three actors. That’s a huge change.
I’ve never rehearsed a show with such a small cast before! We’ve been able to get a lot done in such a short space of time.

What has the rehearsal process been like?
The creative team have been a dream. I feel I’ve been given the freedom to really collaborate and explore my character. We’re getting wonderful results, and I’m looking forward to seeing how the audience will take it.

The playwright, Alex Gwyther, is an actor himself. When you’re working on a play that’s been written by an actor, is it any easier than working on a script by a non-actor?
Not particularly – I think you either have the ability to write a solid script and tell a good story, or you don’t. Alex has proven he can do both.

Your character in the play, Aaron, is described as ‘an explosive and unpredictable teenager with no fear’, who takes traumatised Seb (Joe Idris-Roberts) under his wing. How would you describe their friendship in just one sentence?
Although Aaron doesn’t like to admit it, he needs Seb just as much as Seb needs him.

Aside from your theatre work, people know you best for playing Lee Carter in EastEnders: an ex-Army man who struggled with mental health issues. Watching Lee battle depression, particularly the episode where he was talked down from a suicide attempt by a car park attendant, was heart-breaking, but beautifully done (and clearly well-researched – I suffer from depression myself, and felt it was a really accurate portrayal).
Thank you. I think things will only become easier if we continue talk about these issues.

Now you’re returning to a mental health theme in Eyes Closed, Ears Covered. Do you think the public now has a better understanding of mental health issues, thanks to theatre and TV dramas covering them?
Absolutely, it’s vital that our industry keeps pushing the topic and continues to bring it to people’s attention. Our art [through drama] has already been proven to spark important debate. All types of art forms are meant to have an impact – why not make it a positive one?

The plot also focuses on domestic violence and childhood trauma. Though it’s set in 1986, we’re still dealing with those issues now, and I read that Alex Gwyther and director Derek Anderson did months of research into the effects of domestic violence trauma on children. After dealing with dark and complex topics like these in rehearsals, and on stage next month, does it make you want to get more involved in campaigning for public awareness and changes in the law?
I think it’s always important to understand whatever subject you’re tackling as in depth as possible, warts and all, otherwise we’d be serving those who have or are suffering an injustice. I’d have no reservations in actively campaigning for public awareness, even before this show presented itself; domestic violence shouldn’t be tolerated, full stop. However, I do want to continue tackling new issues in the future, and I enjoy using my craft to bring awareness to these things.

Eyes Closed, Ears Covered is currently playing at the Bunker Theatre through 30 September.