Home » Opinions » CASA Festival and the Importance of Collaborative Partnerships 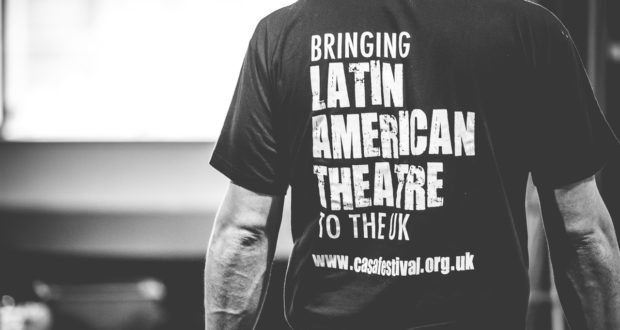 CASA Festival and the Importance of Collaborative Partnerships

Latin American theatre is coming to London this autumn thanks to the CASA Festival, an eight-week festival that has introduced UK audiences to hundreds of Latin American artists. This year, the festival will include the return of Thebes Land by Uruguayan playwright Sergio Blanco at the Arcola Theatre, which earned the title of Best Production at the Off West End awards in 2016. In this guest blog, festival artistic director and Thebes Land director/adapter Daniel Goldman tells us about how the festival’s international mission relies on the festival’s local collaborations with London theatres.

I was asked by the kind people at Everything Theatre to write about the importance of international festivals – and of course, that feels like a good thing to talk about because, in the ten years since I founded CASA, it has never felt more important to be running an international theatre festival. As Brexit looms over us, building bridges through culture between the UK and the rest of the world feels right, and to do so via the arts in a celebratory manner feels even more right.

However, I thought I’d also talk about the importance of collaborations and partnerships because it’s probably the area of CASA’s practice where we’ve seen the most change in the past couple of years, and I’ll start by talking about venues. We used to be a festival that parachuted into venues and we would sort of leave it up to the venue to decide how involved they wanted to be. If they were super involved, that was great, and if not, then we just got on with it.

That started to change with Thebes Land, the show we presented at Arcola last year and that is coming back for another five-week run. Thebes Land was a co-production between CASA and Arcola. We each put half the money in, in exchange for a 50/50 box office split, and we each worked tirelessly to make the show a success. The results were brilliant. Each partner was totally invested in making sure that the show was as good as it could be – from CASA’s point of view – and we felt like we got support like we’d never received before. We were able to share knowledge and reach a wider audience than ever before as well. It’s no coincidence that we’re doing the show again together and plans are afoot to work together again.

It’s also affected the way we’ve gone about our relationship with Southwark Playhouse. Though we are essentially hiring the venue, we’ve been in dialogue with the SP much more than we’ve dared to be with other venues in the past. We’ve asked for more and pushed for more and every step of the way, the Southwark Playhouse has been brilliant at engaging and responding positively. We’ve identified a common goal, and it’s been brilliant to aim for it together. And it doesn’t stop there, because now Arcola and Southwark are collaborating and exploring ways to share knowledge and reach a wider audience through CASA.

Partnerships and co-productions are nothing new. They’ve become a go-to model for producing houses to make work. It feels like regional theatres have led the way and London has followed. Resources are limited – more so every day – and that has forced arts organisations to work together. By sharing resources and doubling audiences, it seems everyone’s getting more for their buck. There are issues, with what feels like less shows actually being produced and subsequently fewer opportunities for artists, but it’s a model that works both for audiences and for the producers – and that’s a pretty good place to start.

Basically, Thebes Land, a Uruguayan play, won the award for best production at the Off-West End Awards in 2016, but what makes me proudest was the fact that Arcola and CASA got together to make it, because it showed that there’s a future for CASA and for great stories from an incredible continent to reach UK audiences.