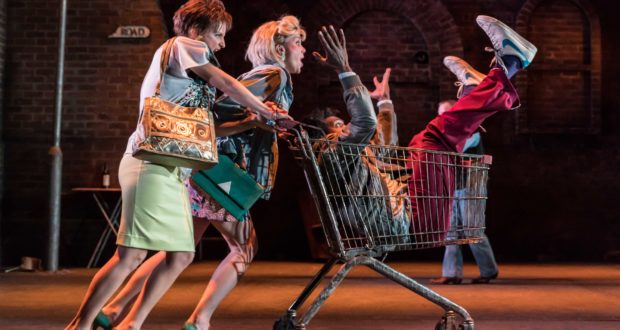 Pros: A script that sparkles with humour brought to life by a brilliant ensemble cast.

Pros: A script that sparkles with humour brought to life by a brilliant ensemble cast. Cons: Characterisation was often restricted to brief vignettes and didn’t always bring sub-plots to a satisfactory conclusion. As a disciple of London theatre I’m embarrassed to admit that I’d never seen a play at the legendary Royal Court Theatre. Thankfully I’ve now broken my duck with the excellent Road written by Jim Cartwright.  The play tells of a forgotten generation, marginalised by the Thatcher years and railing against life’s inequalities. Set in an unnamed northern town, references to wonky shoulder pads and big hair&hellip;

A typically gritty portrayal of life in the finest tradition of northern playwrights.

User Rating: 4.8 ( 1 votes)
As a disciple of London theatre I’m embarrassed to admit that I’d never seen a play at the legendary Royal Court Theatre. Thankfully I’ve now broken my duck with the excellent Road written by Jim Cartwright.  The play tells of a forgotten generation, marginalised by the Thatcher years and railing against life’s inequalities. Set in an unnamed northern town, references to wonky shoulder pads and big hair tells us this must be the 1980s, and sets the perfect landscape for a glorious procession of characters.

The mischievous Scullery played by Lemm Sissay acts as narrator guiding us down ‘our road’.  A glass cubicle periodically rises from the stage floor which adds intimacy and a window into characters’ lives.  Two large doors open outwards to emphasise a claustrophobic existence that for many won’t stretch beyond the road. Whilst the inhabitants are often jobless, lacking direction and incentive, they never lose their sense of humour; and all have a good old fashioned working class gob on them. Verbal exchanges are raucous, disturbing and often very funny.  The brilliant Michelle Fairley (yes the one from Game of Thrones) plays three roles, including the over-sexed Marion trying to seduce a drunken soldier; a perfect example of physical humour. Mark Hadfield delivers another stand-out performance as Country and Western fan Brian; a drunkard trying to line dance is simply a masterpiece of comic timing.  If the play does have a weak spot, it is the brevity with which characters appear, leaving little time for a back story to develop.  Whilst the sketch based format works perfectly well it doesn’t always offer a punchline. For example, Mark Noble as Skin-Lad is an intriguing character but disappears just as the audience is hooked. It seems pedantic to find fault with a play with such outstanding production values, but the snapshot characterisation makes me wish for a spin-off play (if there is such a thing?); Brink and Eddie, the play’s resident likely lads seem to have much more gas in the tank.

Whilst Road was written at the height Thatcherism it doesn’t feel at all dated.  Jim Cartwright cleverly avoids overt political references and instead concentrates on the human cost of market forces. So the play stays current as it now portrays the effects of austerity and post Brexit politics. The Royal Court Theatre is the perfect setting with the sumptuous surroundings of the Jerwood Theatre downstairs and its near perfect sightlines.  The beautiful Italian Gothic architecture also allows for wonderfully comfortable seats and ample legroom (yes, they’ve realised that some theatregoers are over five foot six!).  Plays always have to try that much harder to hold the attention, but on this occasion Road deserves nothing less than the full Monty.