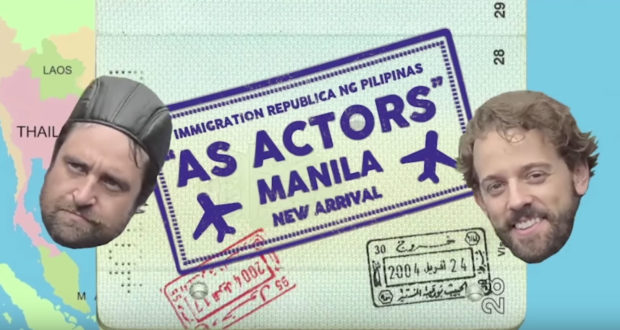 When two Australian musical theatre stars fly to Manila to join the Philippines’ first production of Les Misérables, you expect them to make the most of the country during their downtime – maybe do some island hopping and check out the local markets. You don’t expect them to make a witty YouTube mockumentary series, but then viewers of As Actors: Manila should expect the unexpected. The series, which has made the final of the New York Short Film and Screenplay Festival competition, features exaggerated versions of actors Hugo Chiarella and Tamlyn Henderson. Across ten episodes, their characters try to crack the Filipino entertainment industry, at the risk of their bromance and credibility.

Luckily, I don’t meet the mockumentary versions of Hugo and Tamlyn. Over coffee and away from the cameras, I met up with the actors themselves, who are currently based in London – Hugo is playing Grantaire in Les Misérables at the Queen’s Theatre – to discuss the web series and the benefits of making your own work.

Was it easy to integrate filming and editing into your rehearsal and performance schedule in Manila?
Hugo: By the time we got to Manila, we’d done two years of Les Misérables, which is great, but we wanted to try a side project. It was actually quite energising and it gave us another focus, which probably improved our performances in Les Mis as well! We had to work out the logistics and time for producing; obviously we had practical considerations in Manila, and limited technical resources, but we did it.

How much of the script and episode structure was planned, and how did you decide where to cut each episode?
Hugo: We had a full script, but we went out there knowing we might find things to shoot and integrate as we went along. We had our story planned, but it wasn’t episodic.

Aside from the journey to Manila and the background of performing Les Misérables, there’s a whole story arc running through As Actors: Manila to keep viewers gripped. When and how did you come up with this story?
Tamlyn: We started thinking about it six to nine months before going to Manila, by looking up videos on YouTube. We came across Travis Kraft’s YouTube channel and thought, is he for real? He has loads of subscribers and works in the Filipino film and TV industry, and we wanted to explore that with our characters – what would two actors do if they wanted to get into a Filipino film or TV studio? So, we kind of used him as a vehicle.

I was convinced Travis Kraft was a fictional character, especially seeing the footage of his work, so it was a shock to find out he’s a genuine film star, motivational speaker, and all the rest. How much did you tell co-stars like Travis about what the project involved?
Tamlyn: We described it to him as a part-reality series where we played versions of ourselves, but I’m not sure how much he understood. He shot us for his YouTube channel, though, so I guess it was mutually beneficial. He has thousands of followers so he has to keep making content for them.

Hugo: We watched the footage of us on his channel, and we come across as complete arseholes . . .

Tamlyn: With the other people in the series, we shot the Les Mis cast interviews quite early on, when the UK and Australian members of the cast had just started working together. Some took us at face value, and probably thought we were arrogant idiots, but others figured it out.

The blend of documentary and mockumentary in As Actors reminded me of Flight of the Conchords and W1A. What were your influences when making the series?
Hugo: We didn’t have any specific influences, but I suppose there are great mockumentaries that indirectly influenced us, like The Office and Spinal Tap.

Tamlyn: As well as using our own cameras, we found this camera guy on the Filipino equivalent of Gumtree, who was quite . . . um, well, I’m not sure how much experience he had. He’d watched The Office, so when we explained the project to him, he was going for the camera work of The Office, but he was a little too enthusiastic.

Hugo: The Office has some shaky hand-held camera work, which you get by just holding the camera without a tripod, but our cameraman kept shaking it too much, which we realised when I edited the footage!

One scene really stuck out for me: In Episode 6, your characters interview prostitutes about their lives. It gets quite shocking and sobering, which I didn’t expect.
Hugo: It’s about the altruism and the voyeurism when you travel . . . tourists wanting to change the world, and patting themselves on the back when they haven’t done anything.

Tamlyn: Exactly. And our characters end up offering hotel toiletries to the women, which is awful.

In early episodes, we see clips of you as teenagers in the Australian soap, All Saints. If you could go back and give yourselves one piece of career advice, what would it be?
Hugo: I would have done my own projects, like this, much sooner.

Tamlyn: I agree. It’s really fulfilling to make something yourself.

The San Fernando Holy Week scenes (a local festival, where local people replicate the Crucifixion of Jesus in graphic detail) are pretty dramatic. What was it like to film there?
Tamlyn: We watched documentaries about San Fernando Holy Week online before we arrived, so we knew we wanted to film it. We asked our hotel to organise a driver to take us out for the day. On the way to San Fernando, we stopped at this low-key, smaller crucifixion first, which was quite intense, in the middle of a field. The guy [playing Jesus, being crucified] had a bag over his head. You see some footage of that in As Actors, where my character has flashbacks.

Hugo: In San Fernando, the mayor got involved and wanted to meet us, especially as his daughter is a huge Les Mis fan. But at the actual event, there are very few Westerners, just thousands of local people, and these men self-flagellating in the procession. We got spattered with blood.

Tamlyn: It’s a huge event – there’s a press corps, and drones flying overhead. The guy playing Jesus has done it for about 15 years. It was very different from religious ceremonies in Australia; we have Carols in the Domain, at Christmas [a free concert, live from Sydney and broadcast nationwide], and there are passion plays showing the crucifixion, but in Manila it looked so real.

Will there be another As Actors series, especially now you’re both in London?
Tamlyn: Manila was unique – it worked well, because of that cultural aspect. If we’d just made a series about two jobbing actors, without that backdrop, it wouldn’t have been so interesting.

Hugo: If we made a London series, we’d need a new angle, like reversing the fortunes for Hugo and Tamlyn following As Actors: Manila, and seeing how they cope.

Previous: Extravaganza Macabre, Battersea Arts Centre – Review
Next: He Shoots! He Scores!, Above The Stag – Review