Home » Reviews » Musicals » He Shoots! He Scores!, Above The Stag – Review 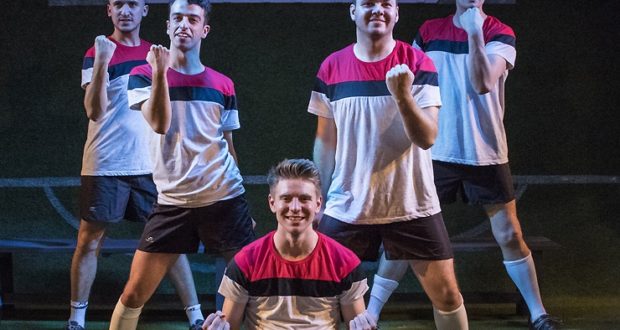 Credit: Above the Stag

He Shoots! He Scores!, Above The Stag – Review

A boisterous musical with balls and a lot of heart!

User Rating: Be the first one !
Above The Stag is the UK’s only full-time professional LGBT theatre. The venue has been in Vauxhall for almost 4 years and now. With the help of £622,000 from private donations, this award winning troupe will soon be moving to a much bigger space comprising of a 110- seat main house theatre and 60- seat studio. Above The Stag has been able to flourish without subsidies or arts council funding which is a true testament to the wonderful work this theatre produces, and it’s new summer musical He Shoots! He Scores! doesn’t disappoint.
From the team behind Get ‘Em Off! and Tinderella, He Shoots! He Scores! is a riot from the first blow of the whistle. The show takes us into and beyond the locker room exploring gay themes in a very straight mans world, namely football. Growing up as a future gay I couldn’t kick a ball for shit, much to my father’s disappointment. No matter how hard my father or PE teacher forced me to play for years, I had zero interest in football. It’s cliched, but true, and He Shoots! He Scores! beautifully taps into these emotions while also championing those gay boys that love football but were to scared to speak up in such a lad dominated sport.
The story follows fresh off the boat Joe, brilliantly portrayed by Jamie Barwood, who arrives in London from rural Devon to join the Hercules Harriers: London’s worst gay football team. Through a series of hilarious mishaps and songs like ‘Gays Can’t Play Football’ and ‘Hot Mess’, Joe sets out to transform the team from losers into winners. Without giving too much of the twist away, the team end up in an international gay football tournament, where they find themselves far more interested in the action off the pitch. The cast are an incredibly tight ensemble with strong performances throughout. The characters are a bit predictable to be honest; there’s the camp queen, the straight gay boy, the gay straight boy and the bitch, but it works brilliantly. Standouts are definitely Duncan Burt’s camp and out of control Tayzr and the rather handsome Richard Watkins as Joe’s pining ex boyfriend Charlie. Watkin’s has to carry a lot of the narrative and is superb. Burt’s Tayzr is a delight and his gut wrenching solo of ‘FOMO’ is a definite show highlight. Watkins and Barwood’s power ballad ‘Moving On’ was stunning and even made this reviewer cry. Harry Cooper-Millar as rule abiding team captain Pete is great, Tom Mann’s straight boy chasing Liam is a joy, jealous lover Will played by Danny Couto is likeable and Joey Godwin and Andrew Cannon play a host of extra roles across both acts with relish.  Thankfully there is a lot of nakedness so you’d be forgiven for being distracted every now and again.
The true hero of this wonderful original work is the book. Co-written by Above The Stag stalwarts Martin Hooper and the rather handsome Jon Bradfield, it’s full of great one liners and gags. My personal favourite “Football Focus and blowjobs, we’re a straight man’s dream!” had me giggling for hours. Even Above The Stag patron and comedy icon Su Pollard, sitting in-front of us, shouted “Oooh yeah!” as a ‘straight’ footballer got his his head around what it would be like to do it with ‘Just A Guy’. I honestly thought I was going to fall off my chair. Bradfield also wrote all of the lyrics and music which is mind blowing as the songs are stellar throughout. Anyone who can transfer the words ‘even in winter it’s down to his thigh’ into lyrics, gets my vote.
Sod the beautiful game, it’s all about these beautiful men! Grab a half time orange and go support this must see show!
Director: Robert McWhir
Book, Music and Lyrics: Jon Bradfield
Book: Martin Hooper
Choreography: Carole Todd
Booking Tickets: http://www.abovethestag.com/shows/
Booking Until: 20 August 2017
Above The Stag Above The Stag Theatre Andrew Cannon Carole Todd Danny Couto Devon Burt Harry Cooper-Millar Harry ooper-Millar He Shoots! He Scores! Jamie Barwood Joey Godwin Jon Bradfield Martin Hooper Musical Review Richard Watkins Robert McWhir Slider Su Pollard Tom Mann 2017-07-11
Neil Johnson