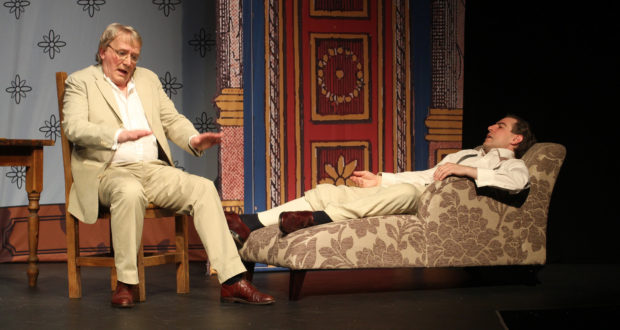 Pros: The cast is excellent.

Pros: The cast is excellent. Cons: The script lacks action and dramatic build up. At the turn of the 20th century, a gentleman called Edmund Backhouse became well-known between England and China for his shameless exploits as a conman. Wealthy and Oxbridge educated, Sir Backhouse had a natural skill for deception and fraud, which culminated in two volumes of memoirs. Both The Dead Past and Decadence Mandchoue however were later recognised by experts as yet another product of Backhouse's fervid imagination, which was also characterised by an abundance of erotic anecdotes involving the most eminent intellectuals and politicians of his&hellip;

An amiable old-fashioned comedy whose overqualified cast makes up for a dull plot.

When, during a conversation at the pub a few years ago, playwright Ian Lindsay mentioned the misdeeds of his extravagant ancestor to colleague Jeremy Cantwell, it was immediately clear to them both that this constituted great material for a play. After extensive research at the Bodleian Library, and with the addition of the co-authors’ even more elaborated fantasies, Chinese Whispers was born.

This light-hearted comedy is freely inspired by the events that involved Sir Edmund Backhouse during his long residence in China, at a time where the country had been shaken by political unrest and consequently divided under the spheres of influence of Britain, France, Germany, Japan and Russia. Slowly building what the authors bluntly define as “a pack of lies”, Backhouse wriggled his way through the different diplomatic powers, consistently profiteering from their naivety.

Set against a colourful painted backdrop that recalls the Fin de Siècle satirical pantomimes, and supported by some animated vignettes projected on the backwall, Chinese Whispers is an amiable but unremarkable piece of theatre. The script is well-written but quite bland and significantly outweighed by an overqualified cast. Luckily, Ian Lindsay’s excellent direction contributes with smooth transitions on stage to keep the audience consistently entertained throughout.

Mark Farrelly is a flamboyant and charismatic Sir Edmund Backhouse, supported with wit and confidence by his factotum Owl Young. The scenes where they both directly address the auditorium are among the highlights of a comedy that suffers from a lack of dramatic elements or plot twists. Whilst the most interesting facts happen off-stage, the visible action is limited and heavily reliant on the character’s verbal accounts.

Overall, Chinese Whispers caters for a cheerful night out. It could become a favourite for amateur dramatic societies which are on the lookout for enjoyable but uncomplicated theatre works that don’t require elaborate staging and won’t suffer much from an unpolished delivery. Go to see it if you fancy an easy ride at the theatre and, by all means, if you live in the surroundings of the lovely Greenwich Theatre.