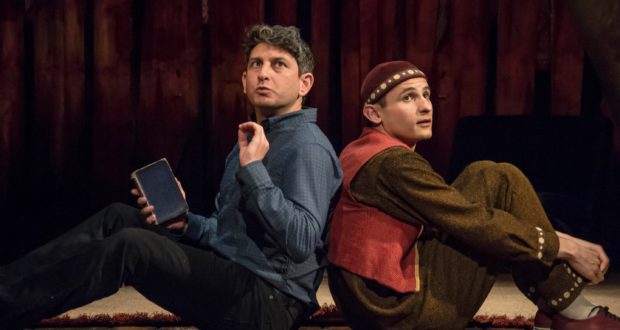 Pros: An emotional rollercoaster of a story that is well told and well executed.

Pros: An emotional rollercoaster of a story that is well told and well executed. Cons: Some irritatingly unnecessary fake accents can at times be ever-so-slightly off-putting. Rickety fences line the back of the modest Playhouse Theatre stage, representing the entrapment of the Afghan people during the rise of the Taliban. Also doubling up as the San Francisco skyline, through his design, Barney George does well to remind the audience that in destruction, there is always hope. Choosing not to follow in the footsteps of big West End productions that have lavish sets and backdrops, this production of The Kite&hellip;

A successful adaption of a great book that honours the story and hasn’t got bogged down with the glitz and glamour of the West End.

User Rating: 1.85 ( 17 votes)
Rickety fences line the back of the modest Playhouse Theatre stage, representing the entrapment of the Afghan people during the rise of the Taliban. Also doubling up as the San Francisco skyline, through his design, Barney George does well to remind the audience that in destruction, there is always hope. Choosing not to follow in the footsteps of big West End productions that have lavish sets and backdrops, this production of The Kite Runner rightly focuses whole heartedly on the storyline.

Fourteen years after the best-selling book was written by Khaled Hosseini, The Kite Runner, adapted by Matthew Spangler returns to the West End by popular demand after a successful run at the Wyndham Theatre earlier this year.

The story follows Amir, a young Afghan boy who is racked with guilt after he witnesses a tragic event in his servant and best friend Hassan’s life. Jealous of the relationship between he and his father and not brave enough to stand up for Hassan, who is a lowly Hazara boy, Amir chooses not to act on what he has seen and slowly everything spirals out of control and into devastation. As the Russians move in, the once vibrant city of Kabul is brought to the ground and Amir and his father make the decision to leave, travelling to Pakistan and onto America. Life doesn’t go to plan and Amir struggles with his childhood guilt. It is only when he meets Rahin Kahn, a family friend from the past, that he makes a shocking discovery and is informed of a way to make things good again. Desperate to repay his debt, Amir travels back to war-ridden Kabul in search of a boy he has been told to find. But danger lies in his path when he is confronted by the very boy who all those years ago abused his friend Hassan.

Told entirely from the perspective of Amir, David Ahmad guides us through the entirety of this sad tale switching between narration and dialogue. A humongous role to take on, Ahmad impressively guides the show, rarely coming up for air and for this he must be commended. Director Giles Croft’s choice to have Ahmad play Amir as a child though is perhaps not quite the right decision. It felt slightly awkward watching him roll around on the ground and make aeroplane noises, and I couldn’t help but wonder if it would have been so much trouble to get a child actor to take on this part. Croft’s choice to have him switch between several different accents is also off putting. Emilio Doorgasingh playing the role of Baba, Amir’s father, is exceptional, particularly during his final scenes when cancer brings his life to an end. Rahim Khan, played by Karl Seth also shines in his performance.

The use of live sound is wonderful, incorporating winding kite spools and singing bowls – an excellently eerie noise that rings through the theatre. Placed on stage for most of the performance, Hanif Khan’s tabla playing is atmospheric, catchy and well played. It’s a brilliant addition to the piece.

A fantastic story, though incredibly sad, this is a tricky show to produce. I am not sure that it could ever compete with the experience of reading the book but it certainly has a pretty good go. The second act is a huge rollercoaster of emotions and the cast do brilliant to handle such difficult issues. At times however, the performance feels a little safe and there are some scenes that require more depth to match others that are stronger.

Generally, this is a very thoughtful performance, dealing with a mountain of issues in a very civil way. The journey of emotions the cast take you on is heart-wrenching, informing and reminding of the horrors that happened and are still happening in this devastated country. The performance has successfully honoured writer Hosseini and so whether you have read the book or not, pick up a ticket whilst you can; it’s definitely one to watch.

Previous: Interview: Anna Marsland and David Fairs on ‘I Know You of Old’
Next: Flashback, Theatre Utopia – Review