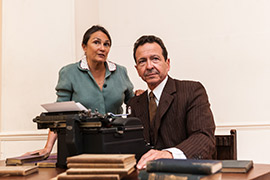 Cons: It’s very wordy, and the first act takes quite a while to pick up momentum.
Mr Gillie, Finborough Theatre – review

Pros: A forgotten play gains new resonance in this timely revival. Cons: It’s very wordy, and the first act takes quite a while to pick up momentum. On Sundays, Mondays and Tuesdays, a visit to the Finborough Theatre will take you back to 1950's rural Scotland. To be precise, it will drop you into the fictional mining village of Crult, where Mr Gillie is the headmaster of the small school, and where his radical ideas about education are not always appreciated by his neighbours or the education board. Gillie’s track record with students he has encouraged to go out&hellip;

A stimulating if lengthy attempt to answer the eternal question of ‘what the hell should I do with my life?’

User Rating: Be the first one !
On Sundays, Mondays and Tuesdays, a visit to the Finborough Theatre will take you back to 1950’s rural Scotland. To be precise, it will drop you into the fictional mining village of Crult, where Mr Gillie is the headmaster of the small school, and where his radical ideas about education are not always appreciated by his neighbours or the education board. Gillie’s track record with students he has encouraged to go out and follow their dreams is more miss than hit; one of his ex-prodigies, for example, has indeed made his way down to London – all the way to Wandsworth Prison. So when Gillie’s latest pet project Tom, with girlfriend Nelly in tow, decides to go to the big city to become a famous playwright, Gillie’s position becomes rather precarious.

The play’s central question of what makes a successful life is a fascinating one, and it certainly still resonates today, although probably in slightly different ways as to what playwright James Bridie imagined when he wrote Mr Gillie in 1950. The almost seventy years since then, however, have left a mark. It’s not a pacey piece of writing, and the first act in particular takes a while to get going. Clocking in at over two and a half hours, a rigorous trim could have done a lot of good here. The first thing to go would have to be the pointless, rather clunky framing device of a post mortem court case, in which Gillie’s actions are judged to decide if he gets to go to heaven or not.

The length of the play is also an issue because most of the characters are not especially likeable. The women get the short end of the stick here: Nelly is a manipulative shrew, while Mrs Gillie is the dutiful housewife who bustles around with cups of tea and apologises for her husband’s behaviour. The men are more padded out, which makes them more interesting, although not necessarily more sympathetic. Clearly the person we’re meant to feel for is our titular hero, but as he and Tom argue over Tom’s chosen course, there’s more than a whiff going on of ‘baby boomer berating millennial for buying avocado toast instead of a house’.

That said, the actors are good and Andy Secombe does an excellent job of portraying of the troubled but passionate Mr Gillie. He has met his match in Malcolm Rennie, who plays Doctor Watson, a formidable man with an equally formidable drinking problem. In the intimate space of the Finborough you are within spitting distance of the actors (sometimes literally), so when things heat up, you really get drawn into the fray. By ‘fray’ I mean heated philosophical debate rather than physical violence; the play doesn’t need that to hold your attention. While some of the more mellow scenes seem to plod along, Bridie’s clearly dry wit comes into its own during a good fight scene.

The debate doesn’t stay confined to the realm of the play either; my plus one and I came out of the show with completely different views on what we’d just seen, so there was some lively deliberation going on on the bus. It’s not a quality I come across that often in a show, and that is what makes this a worthwhile revival. Like its namesake, Mr Gillie may be slightly long-winded, but it provides plenty of food for thought.

Previous: The Hare & the Tortoise & other stories, The Puppet Theatre Barge – Review
Next: All I Want is One Night, Wilton’s Music Hall – Review