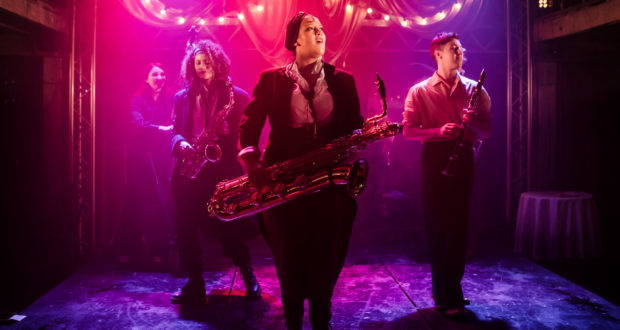 The repertory theatre’s heyday may have passed – but at Watermill Theatre, the iconic system is still going strong. The Berkshire-based theatre and their troupe of actors is currently preparing to tour their Shakespearean programme of Romeo & Juliet and Twelfth Night, giving audiences the chance to see the company’s performers stretch themselves by taking on multiple roles. In this guest blog, Artistic Director Paul Hart discusses the benefits of Watermill’s repertory system and why this long-standing theatrical tradition is worth keeping alive.

I’ve always loved the idea that an audience member can come and see the same actor play Benvolio and Maria; Juliet and Olivia; the Friar and Viola – on the same day, if they wish. For me, rep is a celebration of the actor’s range and skill. It’s also a technical and creative challenge to achieve more with less.

Our current Shakespeare repertory company came about as a direct response to the sense of ensemble at the heart of all Shakespeare’s plays. I wanted a group of actors who would grow and trust each other in rehearsals to unlock these great plays in an uncompromising and unique way. I felt it would give us the potential to take risks, a more dexterous approach to learning and the ability to step away from the distractions of a noisy industry. It was also central to my longing for a production of Romeo & Juliet that had a sense of youth at its heart and used the chorus as a device to understand why this cycle of violence exists. With Twelfth Night, on the other hand, we explored the post-war lost generation, where the values of hedonism and traditionalism meet head on.

I wanted rehearsals to be as alive and challenging as possible – and to explore the joy and darkness of these plays effectively, I knew we’d need a group of actors and production staff who are truly generous, skilled beyond belief and aren’t afraid to tackle massive questions alongside practical minutiae. The audition process became as much about the sort of people these actors are and how they’ll get along with each other five months down the line as their acting abilities. The more we’ve gotten to know each other, the more I think we’ve been able to challenge each other and get better at what we do. I think that sense of professional development is crucial. The rep system offers opportunities to grow and expand – just look at the National Youth Theatre and the brilliant young actors it produces (including our very own Romeo and Juliet!).

In a sense, every show at the Watermill cultivates the feeling of a repertory system – but these two shows take that feeling a step further. We’re also doing something similar with our next shows, Alan Ayckbourn’s House & Garden, with one large company performing the two linked plays. Our actors live together, work together, eat together – and probably spend more time with each other than their own families! They are all engaged in something bigger than themselves, and I think you can see their desire to support each other onstage.

The actors also work incredibly hard. Once rehearsals have officially finished, you can often find them discussing a scene over dinner, writing music in the living room or running lines by the river. Our rural location encourages that sense of focus, allowing us to squeeze so much into a short rehearsal period and never lose sight of a fast-approaching opening night. I was sat in the auditorium giving tech notes after the first performance – and could still hear actors practicing a line on the trumpet. For me, that’s probably where great theatre emerges from: a total commitment to what we’re all trying to create.

Our company has actors from all sorts of backgrounds and with different training and skills. Many of the company members are also exceptional musicians and have crafted the shows’ music. I wanted the actors to have a real ownership of the work, to get to know the building and the team and to be ambassadors for the work we do. When actors of a certain generation talk about their first break in a regional rep, you can tell they’ve never forgotten those colleagues and that place from which their career has emerged. Although the rep system may have gone slightly out of fashion in recent years, actors are hungry for it. Yes, there are some who don’t want to be tied down in case of film or TV work – but so many actors have told me they want that challenge of actively playing the repertoire and the freedom of not being typecast.

I think in some sense, the popularity of regional rep at the moment is economic. We’re all looking at the best way of spending every single penny, we want to foster a loyalty to the actors and creatives we love working with and we want to remain ambitious in a time of austerity. The repertoire system is a way of doing that, as you’re able to squeeze in a few more actor weeks if you can keep a check on overtime bills. In this instance, it has enabled us to tour larger shows than we normally would. To have two major Shakespeare productions on the road will be a huge thrill and will reach completely new audiences for us.

I don’t think that a full rep system will emerge again on a national scale, as the priorities have shifted in too many ways. But I have no doubt that where this system does re-emerge, we all will reap the benefits of the relationship with actors and audiences that the rep system builds.

Twelfth Night and Romeo & Juliet will tour from 16 May – 3 August. Tour dates and tickets are available here.