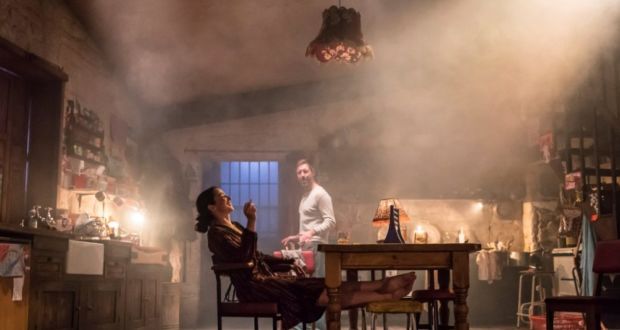 Cons: It is quite long (three hours).
The Ferryman, Royal Court Theatre – Review

Pros: First-rate writing and direction, a stellar cast, thoughtful staging and a heartbreaking story. Cons: It is quite long (three hours). It’s Armagh, 1981, and the Carney family, abundant with elders, children, and a goose, are preparing for the annual harvest in a time rife with uncertainty. Seamus Carney’s body is found in a bog, with a bullet in his head, which leads his family down a slippery slope, whether they are aware of it or not, to a potential fate dictated by a man called Muldoon. Jez Butterworth’s script is masterfully paced, albeit slow-burning. The first two acts&hellip;

An intricate, utterly convincing portrayal of Ireland in the 1980’s, rich with humanity and politics, that uses its three acts to gradually paint a stunning picture of a family trying to get by in a fearful era.

User Rating: 0.65 ( 1 votes)
It’s Armagh, 1981, and the Carney family, abundant with elders, children, and a goose, are preparing for the annual harvest in a time rife with uncertainty. Seamus Carney’s body is found in a bog, with a bullet in his head, which leads his family down a slippery slope, whether they are aware of it or not, to a potential fate dictated by a man called Muldoon.

Jez Butterworth’s script is masterfully paced, albeit slow-burning. The first two acts move painstakingly through several different aspects of the Carney family dynamic, meaning that getting to know the characters takes time. Watching them develop is satisfying, though, like completing a jigsaw; with every scene, their motives mature. During acts one and two, pieces start to fit together. By act three, the whole picture makes sense and you can trace every action back to its conception. The cast commit to the story unanimously, and it shows in the familial chemistry between them. The narrative moves through the preparation for harvest day, Caitlin Carney (Laura Donnelly) quietly dealing with the news of her husband’s murder ten years after his disappearance. Her brother-in-law Quinn (Paddy Considine) also shoulders the weight of the news in secret, with neither wanting to spoil the day for the rest of the family. The two act as the foundation of the family, in an ensemble cast heavy with younger Carney members; funny, sweary creatures of boundless energy that lift the tone of the show with their realistic portrayal of (often very violent!) sibling love. Against this, Donnelly and Considine play their romantic backstory with heart-breaking restraint.

One harvest dinner scene shows masterfully the contradictory forces working against the characters as they try to locate themselves within the tumultuous political landscape. Tom Glynn-Carney’s portrayal of Shane Corcoran, the Carneys’ cousin, embodies this tension particularly well. Butterworth’s script details Shane falling for the tempting pathos of Muldoon. By making Shane feel important, like a vital cog in his operation, Muldoon commits Shane to a cause he does not fully understand. Glynn-Carney’s portrayal of this vulnerable position is pitch-perfect.

Anger fuels many of the motives within the play, and Shane’s anger is muddled up with the general torment of being a teenager. His on stage chemistry with his brother Diarmaid (Conor MacNeil), is completely convincing. Once again, the script is sublimely far-sighted. Shane pushes against his brothers and cousins as they question his actions and so, true to teenager-dom, he takes things one step further.

The Ferryman is a play that leaves nothing to the imagination: Sam Mendes stages it to the highest degree of authenticity. Rob Howell’s set is designed with the contained chaos that can only belong to a large family full of children. The detail in the props, the drawings on the walls, the posters, all add to the aura of family-life that allows the audience to be fully absorbed into the production. Peter Mumford’s lighting design is inventive and complementary. For the most part the lighting is quite strong to cover the large ensemble cast, but it becomes more natural in the quiet moments between each scene; the light coming through the window at dusk catching a character in a moment of contemplation.

The Ferryman is everything you would expect a show of its hype to be, and more: a deep, heart-breaking look at the effects of unrelenting political discord across generations.