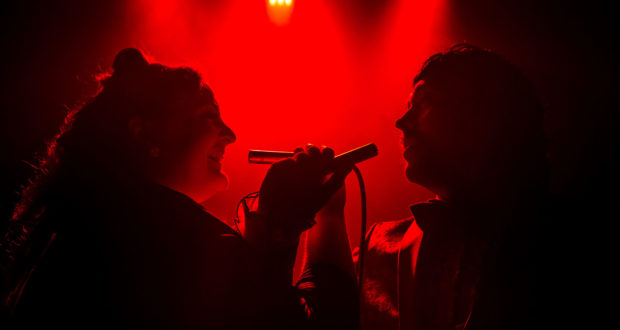 Off-Broadway musical Pete ‘n’ Keely is hitting the UK stage for the first time, and stars Katie Kerr and David Bardsley are excited to venture into this late 60s love extravaganza. We had a joyous time sitting down with the two West End veterans to learn more about their love of musicals and the ‘marathon’ of performing this two-person show.

This is the European premiere of Pete ’n’ Keely. Can you tell us what to expect from the show?
Katie Kerr: Well it’s a bit of a marathon through the lives of Pete Bartel and Keely Stevens. It takes us right back to how they met. The couple haven’t seen each other in five years.
David Bardsley: It is supposed to be a television reunion for them. But the piece, as Katie says, tells you the story of their career.
KK: Right from the beginning, when Keely was entered into competitions as a baby, right up to when she met Pete and how they got together and their life together. You see why and how they fell apart during the show.
DB: It’s a human story – that’s what makes it interesting. The songs are great, but it is their journey and their relationship that stands out.

It seems as if it will be a rollercoaster of emotions. What is your favourite moment of the show?
KK: I have a few. [Turns to David] You go first!
DB: There are the fun bits, which I enjoy, because it’s very pastiche-y and it goes back to a time when entertainers were a bit cheesy and that whole 60s, 70s thing. It was kind of the last decade of that specific type of light entertainer. It’s nice to be able to recreate some of that. So that’s fun. But I like the end.
KK: Yeah I like the end.
DB: You know, when they realise that they need each other. When despite everything that they’ve been through, I think they come to a point when they realise that they can’t live without each other. They become mutually dependent on each other. Despite everything.
KK: I think my favourite bit is just before that. We do a number called ‘Love’, which is kind of the climax of them arguing, and everything has fallen apart, and they don’t care that the audience is there, and they’re going at each other – and then suddenly something happens between them and it makes my character go: ‘Oh my God, yeah that is the one.’ And then we go into a lovely number called ‘Wasn’t it Fine’ and that’s the resolution of it all and it’s lovely. It’s my favourite bit.

What attracted you to the role?
KK: I have never done a two-hander. I’ve always done big musicals with a cast of 35, and actually it was an opportunity to just do something and create something new. It’s the European premiere, so it hasn’t ever been done here. Nowadays you’re put into a musical and probably someone has done it before, because a lot of musicals have been running for so long. I also liked how fiery she was. I think because I’m a bit like that – ‘Don’t cross me!’ kind of thing. I like that part of her, that she is also quite stubborn, but actually she’s got a heart of gold and all she wants is to be loved, really. She just wants to be loved by this man. Because actually, she is incredibly shocked when she finds out that Pete, who she hasn’t seen in five years, has actually moved on from her. She can’t understand that. That’s all she wants – this man in her life.
DB: I wasn’t doing anything else. [bursts of laughter]

It came at the right time!
DB: Yes! But that’s not necessarily a reason to do it, of course. I read it, and like Katie says, it’s always nice doing new stuff. I know it’s been done in America, but it’s nice to be the first to do it over here. It works on two levels – it’s a piece of light entertainment, but it also works on another level, that’s what made me think – I think it might be alright to do this. I’m of a certain age right now, and I’ve been married a long time and after reading it I thought: ‘Yeah, yeah, I know what they’ve been through.’ And as an actor, it’s all about what you think you can bring to a role and if you see something that you think, ‘God, I know exactly what he’s thinking there,’ or ‘I’ve been there and all that.’ There was a lot of recognition and empathy, and I thought, ‘Yeah, I’ve got that experience now,’ so here is a chance to use it, and that attracted me to the role.

The show is centred around music. What is your relationship with music, and what should the audience expect from the performance music-wise?
KK: It’s just masses of it! It’s 18 songs that we do . . .
DB: I was very nervous . . . I’ve never done a two-hander either, and I was really nervous – can I sustain it for a whole show?
KK: Yes, it’s a marathon, this.
DB: Yes, but you’re never off the stage, you’re singing all the time, and then when the song’s finished, you’re doing dialogue. And because this is a relationship, we are often shouting at each other. My relationship with music in this is as about as stressful as my relationship with Keely. It’s, ‘How am I going to get through this?’
KK: It has been, I would say, a challenge, because I do read music very, very slightly. I gave it up a few years ago, which was stupid of me, but I don’t think I realised how much there was, because every single song as well is full harmony. There is hardly any time that we are singing in unison, so we have had a lot of harmony work to do.
DB: It has been a hell of a learning curve. We were talking about this – I wake up at night with the music in my head, I don’t wake up and start thinking about it. I actually wake up and it’s almost as if the music has woken me up.

But it’s nice as well. Over the years, I’m not hugely versatile vocally, I tended to do legitimate stuff, but this is quite jazzy, and poppy, and I don’t really do that. So again, I was quite nervous about it – thinking, ‘Oh God, I don’t know if I can do this.’ It’s like when you hear opera singers trying to sing a pop song and they can’t place their voice in the right place. And it’s just not even a pop song. I remember once watching Leslie Garrett singing ‘Losing My Mind’ and it was cruel, not because she can’t sing – she’s a brilliant opera singer– but she couldn’t lighten her voice for musical theatre. And it made me wonder if I could cope with some of these lighter, jazzy kind of numbers . . . So it’s been a challenge.

Musical theatre holds a very dear place in my heart, and I believe it does for you too. What is your biggest inspiration and influence from the vast world of musical theatre?
KK: I didn’t have a choice, if I’m quite honest. It was the only thing that I was going to do. I remember sitting in front of the television at about seven years old and my mum sitting me down and making me watch Barbra Streisand. And I used to say, ‘Ugh, I don’t want to watch this, mum,’ and she replied, ‘Just watch it, because this is how it’s done.’ And she used to make me watch the old films, like all the old Judy Garlands and Marilyn Monroes. It was also in my blood. My mum is a performer; my dad was an opera singer. It was always going to be something that I did. So I’ve just grown up knowing.
DB: It was more of a process with me. I always sang as a kid. I was in choirs and I did join a youth theatre and started doing musicals then. I had no ambition to do musicals really, but then I remember Les Miserables. I suppose that was quite an influence. I remember, my girlfriend at the time, I was about 18 or so, she bought tickets to Les Mis and she was down here doing teacher training. I was still up north, I didn’t know what I was going to do . . . and she bought those tickets. And I remember we watched it from the balcony at the Palace Theatre and I was just blown away. And, ironically, some of the moments I remember are the ones that I ended up doing. I remember getting the soundtrack on tape, when I got back north and I wore it out, and this was before I even went to drama school. That made me start thinking about maybe wanting to go into it. And then I went to drama school, and it wasn’t a musical theatre course, but if you can sing, you get sucked into that whole world.
KK: I do think that youth theatres do play a big part in stuff like that. If you encounter something as a young kid – when I’m not in acting I teach, and you do see, it’s not just about pushing them into musical theatre, it’s the confidence building that it does. You see people that go into it, and I think youth theatre is brilliant for that.

That’s so sweet! And the last one: What do you hope the audience will take away from the production?
DB: Well . . . again I think it works on two levels. I think it’s just entertainment, escapism. But if I was watching it, and it’s done as brilliantly as we are doing it [laughter], I would find it quite cathartic. You always gain something – the solidarity of realising that everyone else goes through crap. You think you’re the only people, or that yours is the only relationship, but all you have to do is scratch the surface, we are all trying our best. We are all going through it.
KK: I just think it’s going to be quite a fast paced, fun, heartfelt evening.
DB: It’s optimistic. There is an optimism about it. There is a life – the glass of life is half full. It’s one of those kinds of shows.

Pete n Keely is currently playing at the Tristan Bates Theatre through 20 May.