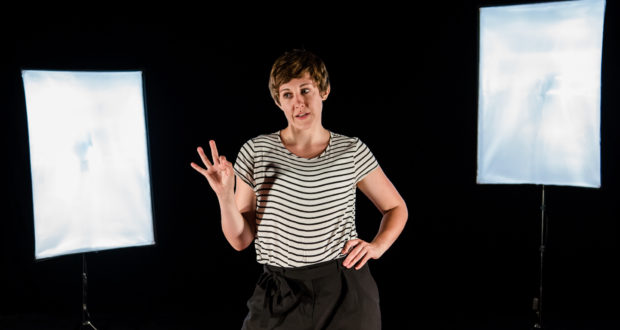 Congratulations on the success so far with BLUSH! The response so far has been incredible. Can you tell us about the show and what audiences can expect?
Thank you very much. The show is about shame and the violence that lashes out of us when we’re in shame. It’s about misogyny and image based sexual abuse. It’s about kindness and empathy and love. There are five characters, two actors and a whole load of sweat.

The show has been to several venues now, including Camden People’s Theatre, Edinburgh Fringe, Underbelly Festival and now the Soho Theatre. How has the show evolved from where it started? It’s changed a lot; the Edinburgh run taught us a lot. As performers, it takes real stamina and a relentless curiosity to perform at the Edinburgh Fringe. Camden People’s Theatre has such a wonderful audience, we had brilliant conversations with people in the bar after. Then the whole world changed, politically and socially, and that’s somehow affected the work. [Director] Ed Stambollouian and [fellow actor] Daniel Foxsmith are brilliant at pushing me to question the why — particularly with the male characters — so there’s been a few rewrites ahead of the Soho Theatre run.

You’ve performed at The Soho Theatre before with Bitch Boxer. We think Soho is one of the best for encouraging theatre that opens conversations about society’s urgent problems. Is this an exciting venue for you to be in again?
I think Soho Theatre insists on theatre that couldn’t be any other medium; Steve Marmion [Soho’s artistic director] always pushes for that . . . if this play could be a film or a radio play, then we should make it that. I love theatre that is live, aware of audience and is asking difficult questions. Soho Theatre is really vibrant, really busy, really exciting — it feels like being back in Edinburgh. So, yeah, it felt like the right fit for BLUSH and I’m really happy to be back.

What sort of reaction do you want your audiences to have when they see the show? What are you hoping that the show would leave them to think about once they have left the theatre?
BLUSH asks a lot of questions, poking at difficult things we don’t usually like to talk about. Five characters share their stories of shame and I hope that provokes an opportunity for empathy from the audience; to think ‘me too’. God knows we all need to practice more empathy and kindness right now.

We couldn’t agree more! Victim blame and shaming is gaining a lot of attention in theatre, art and literature. Have you had any audience feedback so far that has inspired you to keep engaging with this kind of subject?
Yes. I’m passionate about making work that allows women to take up space and have a voice. The conversations with female audience members after the show have been really powerful. I’m extremely grateful to those women who have spoken so honestly to me after watching BLUSH. What’s been more surprising, and perhaps more pleasing for me in some ways, has been the reaction from men. I’ve worked really hard to make the two male characters feel authentic so I’m really grateful to have had conversations with men who either identified or were provoked in some way by the work. Blame is just the discharge of pain, it’s easier to be angry than scared. So yes I’m inspired to keep writing about shame and our reactions to it.

Are you allowed to tell us what is next on your agenda? You can’t stop now; you’re on a roll!
Thanks. I’m working with Boundless Theatre on a new play and I’m working with the BBC on a film. I’m co-artistic director of Snuff Box Theatre and can’t wait to get back in the room with Bryony, Dan and Jake to make some new work.

BLUSH is currently playing at the Soho Theatre through 3rd June.