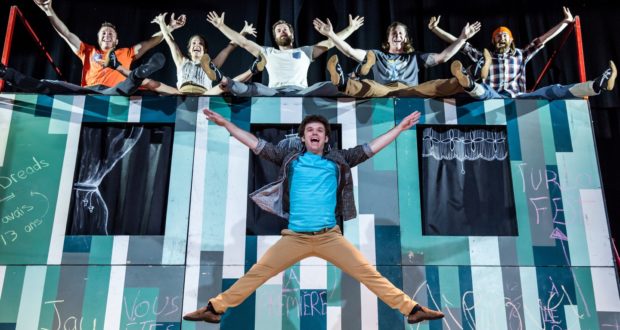 Pros: 75 Minutes of pure, open-mouthed wonder and joy, a circus performance that uses every performer to their max, and a closing act that is simply indescribable.

Cons: The tight space of the venue means a lot of neck cranking to see some of the low level moments. And don’t get me started on the chaos that is their queuing system.
Catch Me, Underbelly – Review

Pros: 75 Minutes of pure, open-mouthed wonder and joy, a circus performance that uses every performer to their max, and a closing act that is simply indescribable. Cons: The tight space of the venue means a lot of neck cranking to see some of the low level moments. And don’t get me started on the chaos that is their queuing system. Underbelly has returned yet again for its summer residency on the Southbank. And if tonight's offering is any indication of what the next few months will have in store, it's going to be as great as ever. Although&hellip;

Another stunning Canadian export that surely won't fail to put a smile on the face of old and young. Take your kids or take your granny, both will love it equally.

Underbelly has returned yet again for its summer residency on the Southbank. And if tonight’s offering is any indication of what the next few months will have in store, it’s going to be as great as ever. Although it also looks like it returns with the same inability to organise a queue that drove me so mad last year as well.

Catch Me, or to use the French name, Attrape Moi, is the work of Quebec circus group Flip FabriQue, who have taken residency for the first half of the summer. They are a circus act with so much oomph it can be a struggle to catch your breath somewhere in between the start and finish. We get perfectly choreographed and crazy acrobatics using every inch of the stage, graceful rings performances, plenty of clowning around, a closing set that has to be seen to be believed, and so much more crammed in between. And all done to a soundtrack that makes me want to give a special credit to whoever arranged it. The smile that spread over my face in the first few minutes never wavered, except for those moments it formed an ‘O’ with pure childlike wonderment at what was happening mere feet away. In fact, the audience is so close that those on the front row were physically ducking at times, when it appeared the performers were getting just a little too close.

The story, a loosely constructed tool to join the separate performances together, is of six friends enjoying their summer. From the opening rain storm as they all look for one another, through the warm weather as they share ice lollies, and finally night time as they all bunk down together in the same small space, the camaraderie shines through. There is a feel of silent movie about it all, as there is very little spoken word; what there is, is done in comic-like squeaks and other noises that hardly form words but are enough to express a mood, be it surprise or delight at one another.

Of course, as with any bunch of friends, they have their differences and disagreements that need resolving. I doubt, however, that any of us have ever done so with a diabolo (basically a spinning top on a string) stand-off that sees diabolos fly in all directions, but (nearly) always in complete control as the two competitors try to outdo each other. It might sound a little dull but when it’s done in such high octane style, it’s hard not to enjoy every spin and toss.

As if the first 70 minutes were not enough, the concluding five don’t just leave you breathless but suck the last gasps from your painful lungs, as all six performers fly on and off a hastily erected trampoline. The end definitely belongs to the two high fliers of the group, not just bouncing but walking up the wall in unison as they do so. It adds just another moment of open-mouthed wonder as you marvel at the skills on display and question if it’s actually physically possible to do what they are doing right in front of you.

What elevates Catch Me from the great to the absolutely stunning is the feeling that these are true friends enjoying every moment together, and the sheer charm and joy that they elude throughout is infectious. That smile that formed as the show went on is likely to last for a good few days yet.