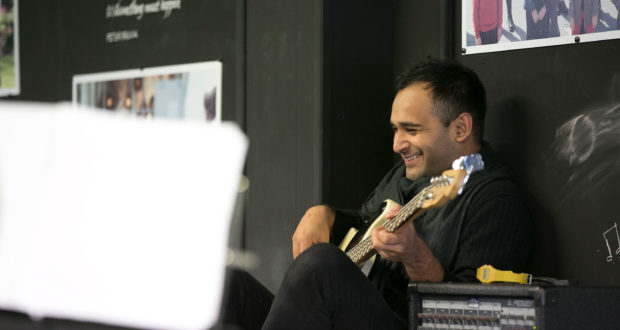 Playwright Titas Halder saw his first two plays produced back-to-back this year, both under the direction of Hannah Price. After the recent premiere of Run the Beast Down at the Finborough Theatre, Halder’s newest work, Escape the Scaffold, is now making its debut at Theatre503. Halder – who has hands-on experience as both a playwright and director at such venues as the Donmar Warehouse, Royal Court and Tricycle Theatre – spoke with us about his visions as a theatre-maker and how it all started with a school assignment.

Can you tell us what Escape the Scaffold is about and what message you hope it sends to the audience?
Escape the Scaffold is a thriller – it’s psychological, it’s political, it’s gothic and it’s a love triangle. It’s about love and betrayal and trying to hang on to the edge of the cliff when your fingers are slipping. It’s funny, it sort of lives on the edge of madness, and the cast are giving some fantastic performances. If you’re squeamish, you might need to shut your eyes a couple of times, though. If you like David Lynch movies or Guillermo Del Toro, then maybe you’ll like this . . .

Escape the Scaffold is your second play, following the debut of Run the Beast Down at the Finborough earlier this year. How did the experience of your debut play and the feedback you received on it influence the development of your current work?
It’s beyond exciting to have Run The Beast Down and Escape The Scaffold open back to back. It’s been a thrill to work with wonderful actors on both, and to have had the brilliant Hannah Price direct both. Escape The Scaffold was actually written before Run The Beast Down, so in a sense, maybe Run The Beast Down was influenced by Escape The Scaffold. I suppose they share something of that 3am night-time parallel universe. The howl in the night, the knock at the door. I wrote them at a time when I never could imagine that they’d be produced, I had freedom then. Now, maybe if I have half a thought that it might reach the stage, that could change things – I don’t know yet…

Your writing has been highly praised by critics and compared to that of authors like Tom Wolfe, Jez Butterworth, Neil Gaiman and even Shakespeare. Do you have a favourite writer, or is there anyone in particular whose work particularly inspires you?
I love thinking about other writers and other plays in the same way that a musician would think about other musical influences when making an album. I love reading plays and poems, watching interviews of heroes on YouTube, watching films, listening to albums, absorbing all that stuff and then channelling something of it when I’m getting down to writing. I learnt so much from just reading, and reading, and reading plays from Harold Pinter, debbie tucker green, Conor McPherson, Albert Camus. Music influences my writing too. Sly Stone’s There’s a Riot Going On and Fresh are masterpieces, so dark and deep and soulful and political, but then also funky as hell. That’s what you want for the audience, isn’t it?

How would you describe your writing style? Do you think it varies between pieces or do you feel that there is an underlying thread that identifies your authorship in all of them?
If I have one agenda, it’s to try and write good parts for actors. In a way, a large part of my writing education comes from being an assistant director in other people’s rehearsal rooms, watching top actors create amazing performances. I think audiences love watching great performances by great actors – Mark Rylance in Jerusalem, Nadine Marshall in Random – so, if an actor read a play of mine and thought: ‘f*ck yeah, I want to play that part!’ then I’d be happy. I love that in Escape The Scaffold we have three young actors who have just graduated and are giving massive performances.

Run the Beast Down had an electronic soundscape (designed and played live by DJ Chris Bartholomew), and Escape the Scaffold also has a significant musical element. Considering that you are also a musician, did you ever consider merging your skills and – if yes – how?
I’d love to. Sinners Club was pretty cool, it was like directing a band, a gig, a play and a music video all at the same time. I’d love to do some kind of dark electronic funky musical – it wouldn’t be a musical musical, but something like that. If you’ve got a great funky bass line in the song, then it would be cool for the audience to be able to see the person playing it. Writing songs and music for me is in the same world as writing plays. I love the idea of making an album alongside a play and having them as parallel projects, almost like a soundtrack album. It’s a great time to be getting stuck into recording music and filmmaking and crossing-over skills, as you get to collaborate with other exciting artists and they push you to work harder and play better.

Award-winning director Hannah Price has directed both your plays. How do you think her work contributes to making your scripts come alive?
Hannah had a striking vision for both of them. I think it’s really exciting that she created her own distinctive world for them. I could have never imagined – never conceived of – her production of Run The Beast Down, with its extra onstage character (the DJ) and live soundtrack, married to the world of neon/fluorescent tubes. She created a sort of dark electronic landscape for it. My play was about ‘a man and a bare stage’ but she looked into it and saw those striking elements and thought that an audience would enjoy them. As a fellow director, for both plays, I thought ‘I’ve got to get out of her way and let her complete her vision.’ Hannah’s fantastic, and I hope we can do another . . .

How has your experience of producing theatre changed by going from directing to playwriting? Has switching roles made you see directing or playwriting in a new light? Does your work as a director help to inform your writing?
In truth, it’s the other way around, I’m a writer who started to direct. I got into theatre through writing when my English teacher set us – the whole class – homework, which was ‘write a scene’. It didn’t mean anything to any of us, but we all wrote our scenes and he sent them off to the Royal Court. They kept in touch with me and a few years later I was able to do the young writers’ programme there. From the course, I just read tons of plays – Simon Stephens, Jez Butterworth, Marina Carr – whatever was in the bookshop. And, because I was knocking about with other writers, we would direct each others’ readings and, because I was reading all these plays, I just wanted to see them on stage – like One For The Road by Harold Pinter – so we just put them on.

Maybe that’s why I get on with writers so well, I understand the murky water because I’m in it as well. I know the endless rejection letters and non-replies from theatres, so we’re in it together. I suppose coming to my first productions as a writer whilst knowing the score as a director, it just means I understand the process a bit better. You recognise when the actors are just learning lines and need space. It’s exciting to watch another director work and the company of actors get stuck into the play. As a director, you have to be the calm centre of the universe on a production but, as a writer, maybe you can have more fun . . .

Do you already know what your next project will be? Is there anything we should expect in the near future?
There are things cooking away. Slow cooking. Lamb shoulder. Rosemary and garlic. Low temperature. Five hours. Delicious.

Escape the Scaffold is playing at Theatre503 until 15 April 2017. Tickets can be booked here.

Previous: Chinglish at Park Theatre – Review
Next: Win tickets to see Shit-faced Shakespeare: Much Ado About Nothing at Leicester Square Theatre