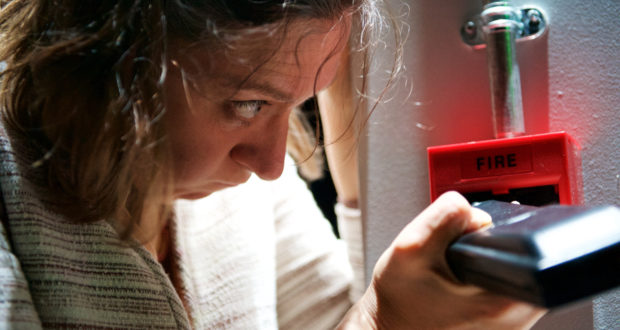 Cons: The show’s message was less clear than I’d expected from the level of research.
The Lounge, Soho Theatre – Review

Pros: Brilliantly observed performances, countless hilarious moments. Cons: The show's message was less clear than I'd expected from the level of research. My visit to Inspector Sands' London debut of The Lounge began the way I wish all my theatre visits did: with a comfortable seat, and a great view of an intriguing-looking set, in one of my favourite central London theatres. The unanimously great reviews promised that I'd be 'completely lost in the moment' (Broadway Baby) by this 'breathtakingly moving' (Scotsman) show that also managed to be 'mischievous and pleasing' (The Stage). So I was expecting a lot.&hellip;

A surreal, precise and joyous piece of theatre with room for more questions and more answers about the issues it addresses.

User Rating: Be the first one !
My visit to Inspector Sands’ London debut of The Lounge began the way I wish all my theatre visits did: with a comfortable seat, and a great view of an intriguing-looking set, in one of my favourite central London theatres. The unanimously great reviews promised that I’d be ‘completely lost in the moment’ (Broadway Baby) by this ‘breathtakingly moving’ (Scotsman) show that also managed to be ‘mischievous and pleasing’ (The Stage). So I was expecting a lot. I wasn’t disappointed.

The Lounge is a farce set in a elderly care home, created to make its audience think more deeply about ageing and elderly care. The plot is short: 97-year old Marsha Hewitt (magnetically embodied by Lucinka Eisler) sits in her armchair on the day of her death, quietly fuming at the food, the constant daytime TV and her fellow residents (who wouldn’t?), while a pair of mildly negligent but more than mildly annoying care workers and visitors come and go. But I found the whole thing mesmerising…as long as I didn’t think too hard about what it all meant. That was just scary.

Inspector Sands’ members have been making rich and stylish work together for years, and it shows. Nuanced, accomplished performances from all three cast members are a treat to watch: Eisler’s transformation into gawky nonagenarian Mrs Hewitt is a masterclass of physical control, and Guilia Innocenti’s busybody charge nurse morphs into a sugar-addicted Lounge resident so smoothly that I often thought I saw both characters on stage at once. Dennis Herdman is even busier as a smartphone-shy granddad who goes AWOL, his benignly irresponsible grown-up grandson, and a care assistant who dutifully does his job between conspicuously regular fag breaks.

The plot is short, but of course it’s anything but simple. Mrs Hewitt can’t just die: she keeps getting side-tracked. Supported by Elena Pena’s ingenious sound design, each distraction is played for maximum laughs. Highlights include an intricate tussle for the TV remote, an episode of remorseless birthday present theft, and a moment of orgasmic violence. Jamie Vartan’s stylish set has a sense of humour too: the many fantastical touches – too many fire exit signs, all kinds of little hiding places, the best stage broom cupboard I’ve ever seen – somehow make the care home seem more ‘real’.

Occasionally, more serious moments glimmer among the laugh-out-loud set pieces. Outwardly comic food-hiding episodes set up a heart warming moment of friendship between two residents. Mrs Hewitt’s failed attempts to escape had me rooting for her (I hate daytime TV too) but also highlight the many reasons why such an escape would be impossible. It’s moving that this impossibility is obvious to everyone – even Mrs Hewitt herself – but not to the clueless (about my age) grandson. An interview with The Lounge’s iron-lady caricature head is a real lesson about how care homes work, as well as a welcome reminder that residents remain independent adults as long as that is possible… just like us.

The Lounge is a great introduction to some real questions surrounding ageing, but for a show that so proudly points to its extensive research, I never felt that it was quite decisive enough about what actual questions it was asking. The company are running a big programme of panel discussions alongside the show, and an even bigger ‘Mass Observation’ ageing project – perhaps findings from these will feed back into deepening the show’s message in future.