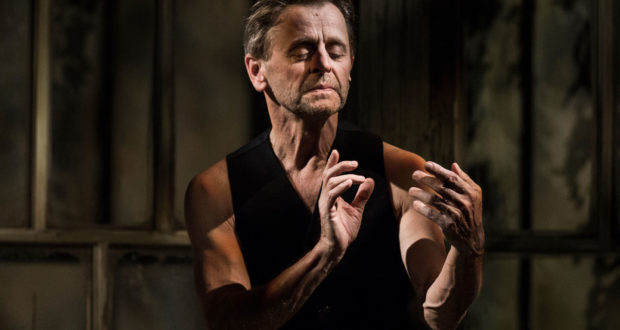 Few dancers enjoy as legendary a status as Mikhail Baryshnikov, the iconic dance artist whose balletic career included work with the New York City Ballet and American Ballet Theatre. Since stepping down as director of the White Oak Dance Project in 2002, however, the dancer has taken a much more multidisciplinary approach, founding the Baryshnikov Arts Centre in New York City and turning to acting and photography as artistic outlets.

In addition to your friendship with Joseph Brodsky, what was it that attracted you to this production and sharing Brodsky’s poetry in this way?
It was more than 50 years ago when I first read Joseph’s poems and they hit me hard. Truth and grace in words. What makes his poems unique is the deep, scathing intelligence combined with the most simple and deep emotion.

You’ve now toured this work around the world since 2015. How has the show, or your approach to it, evolved throughout its tour? Have you discovered anything new about either your own performance or Brodsky’s poetry as you’ve presented it to different audiences?
That’s the thing, Joseph’s work is extraordinarily relevant to the present and we have an excellent translation by Jamey Gambrell, a former student of Joseph’s who captures his humour, wit and wisdom so the play is accessible to everyone. The goal is always to stay true to the director’s original vision, so I think it’s fair to say that the venue doesn’t drastically affect the play one way or another. When you tour you don’t think about what city you’re in. You just need a comfortable bed and a lovely space to perform in.

What do you hope audiences take away from the production about Brodsky and his work?
The play is an intimate experience – a conversation between me, and my beloved friend – and so I hope they can feel included in that intimacy. It isn’t a dance show, and it isn’t a narrative, but if they are curious about Joseph’s work and my reactions to it, then they may be interested. It takes an open mind.

Can you describe your collaboration with director Alvis Hermanis? How did the two of you work together to bring the production to life?
The idea to make theatre out of Brodsky’s poetry was suggested by Alvis Hermanis, the great Latvian stage and opera director. He invited me to do it and I was truly honoured to work with such a remarkable director. Alvis harbours a deep love for Russian literature, and for Brodsky’s poetry in particular. I was sceptical to begin with – there are obvious problems with adapting poetry for the stage – but I was impressed by Alvis’ artistic vision in his other works, and after a year and a half of discussing it, we decided to do it.

Why did you want to bring this show now to London? What has stood out to you about British audiences and London’s arts scene when you’ve performed here in the past?
The answer to both those questions is that it’s the ultimate challenge! I mainly wanted to be honest and true to Joseph’s work.

How do you feel your background in classical ballet has informed your work as you’ve moved into other art forms, such as acting and photography?
That was in fact a requirement of the director. In Brodsky/Baryshnikov there’s no dance per se, but there’s a lot of body language, so that was the bridge to bring my dance background into the drama of the play.

In a similar vein, you founded Baryshnikov Arts Center in New York as a way to bring together artists from all disciplines. How do you feel artists benefit from being exposed to and working with artists from other disciplines? How can dance, theatre and other art forms learn from each other?
Absolutely, artists most definitely benefit from being exposed to other disciplines. The Baryshnikov Arts Centre offers space and funding to new artists and a 238-person theatre for performances so that they can do exactly this. Personally, I don’t feel a difference between dancing and acting. Patience and discipline unite them, and I use the same instincts so I can’t really make a distinction between the two.

What’s next for you? Is there anything specific you still hope to accomplish in your career?
Right now I am traveling with two plays (Robert Wilson’s Letter to a Man and Brodsky/Baryshnikov.) I’m good with that!

Brodsky/Baryshnikov will play on the West End at the Apollo Theatre from 3-7 May.