You can use WP menu builder to build menus
Home » Features and Interviews » Interview: Matthew Bugg on ‘Miss Nightingale’ 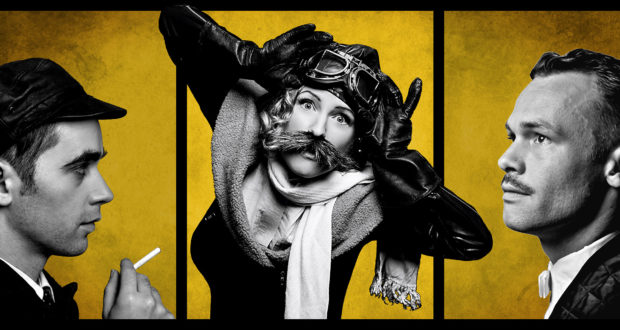 Author: Everything Theatre in Features and Interviews 21 April 2017 0 290 Views

Miss Nightingale is a World War II musical currently playing underneath Waterloo station at The Vaults. It tells the story of singer Maggie, her Polish composer friend George, and her patron Sir Francis. There’s closeted homosexuality, blackmail, blitz spirit and a whole range of songs, ranging from the touchingly romantic to the joyously bawdy. ET writer Nick Myles met up with writer/composer/lyricist/performer Matthew Bugg to talk about Miss Nightingale’s development and being a man of many hats.

You’re a man of many hats. How do you find balancing all those roles?
I’m able to pretty much divorce those things from each other. When I’m playing on stage my head is totally in the music, but then when I’m not playing and I’m just watching the scenes, I’m constantly looking at the audience trying to see how it’s landing with them. We’ve toured the show five times now, played to 50,000 people in all sorts of different places. It plays so differently in different areas, which is just fascinating, and bringing the show to London has been incredibly revealing about what London expects from a show. [It] has required us to make some adjustments – we’ve actually cut three numbers from the show and added a new scene. I’m always thinking, ‘If this isn’t landing with the audience, what is it we need to shift?’

You’re a producer as well. How is that experience distinct from being an artist?
It’s not easy. We call ourselves ‘artisan producers’. We worked really, really hard to find a producer for the show, and were told time and time again that nobody would come to see a show that has a gay love story at its heart, or a show that had a female lead who didn’t end up with a man, or a show that wasn’t based on an existing book/film or existing back catalogue of songs. We tried for about three years and were getting nowhere, and then we kind of went, ‘Well, if no-one else is going to believe in this, we’re just going to do it ourselves.’ So we became artisan producers, which is a streamlined way to make work without compromise.

What was the spark that ignited the show’s evolution?
It’s a story about trauma, about how these very traumatised people – for very different reasons – are trying desperately to find a way to live their lives with integrity, and to reconcile who they are with what the world expects them to be. But that’s quite deep, and in order to make that connect with a musical theatre audience, you have to find the right way to engage with them. And that’s through the comedy and the songs. Actually, you can tell this story about these totally brutalised people who end up behaving quite badly towards each other, but you tell it with such humour and joy and life and vibrancy that people aren’t even aware half the time that that’s what the story’s about.

How did you develop the show?
It’s been a very long, slow and detailed process – lots of research. We did it first at the King’s Head as a three-hander, and we got some brilliant feedback – there was a lot that was right about it, but there was lot that was wrong with it as well. So then I went away and worked on it for two more years, and then we took it to New Wolsey Theatre in Ipswich, who helped us develop it into a full-scale piece, which we then toured for twelve weeks. It was extraordinary that we were able to go from a tiny show in the King’s Head to playing thousand-seater venues. We were really flying by the seat of our pants, and it was a huge learning curve.

And now you’re in London for two months at The Vaults . . .
Because we hadn’t done London in a significant way, the industry hadn’t taken any notice of us. We’d played to 50,000 people around the country, and yet we were irrelevant to the London industry. The London-centric view of the industry is part of a London-centric view of society, and as a northern company, that’s really hard to take.

So why then is your show set in London?
That’s a very good question. It’s about the outsiders – people think it’s a show about immigration, and the Polish Jew is the obvious immigrant, but actually it’s Maggie, northern working class lass – that’s who I identify with. She’s a woman who is struggling to have her voice be heard in a world that’s dominated by men, and I’m a northern working class artist who’s struggling to have my words heard in a world that’s dominated by the middle class in London.

What are your influences and inspirations?
It’s everything, it really is. I love Cabaret dearly, but actually I think a lot of my inspirations are not musicals, they’re plays. I love the plays of Ben Johnson – I adore his plotting – and Arthur Miller is a really simple, pure, direct playwright. I love Noel Coward for his use of humour to make the most biting critiques of society, I love Oscar Wilde . . .

But I also love journalists – for instance, I find Caitlin Moran absolutely fascinating and so challenging.

You sustained a shoulder injury that curtailed your dance career. How traumatic was that for you, and do you ever think about where you might be if you’d been able to stick with dancing?
It was incredibly traumatic – I desperately wanted to dance, and I’m still passionate about dance, but I think actually the dream of dancing and the reality of being a dancer are two different things. Also, I’m too obsessed by words and ideas and storytelling to have ever been a happy dancer. So although it was very traumatic, it was the best thing that could have happened, because it made me question exactly what it was I wanted to do.

What’s next?
We’ve got another show in mind called The Queen’s Hand, which is all about how women take power legitimately or illegitimately in a world that’s dominated by men. It’s a very feminist show, and with a very different aesthetic to Miss Nightingale – it’s set in a sort of feudal world, a patriarchal society, and it will absolutely confound everyone’s expectations of what we’re going to do next as a company. It’s at a very early stage, and my process is not fast – the thing about being book writer, composer and lyricist is it just takes a long time. The great thing about it is that it means the whole thing is totally homogenous, but you’re doing three people’s jobs, so it does take time.

Miss Nightingale the Musical is currently playing at The Vaults through 20 May.

Previous: Life By The Throat, Theatre 503 – Review
Next: Half a Sixpence, Noel Coward Theatre – Review