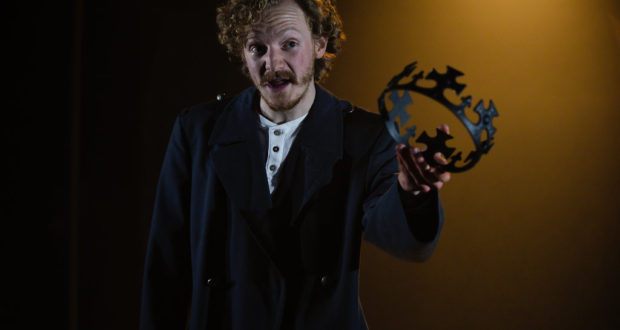 Pros: A fabulous performance from the main man – definitely one to watch.

Pros: A fabulous performance from the main man – definitely one to watch. Cons: Inconsistency with design means that some scenes are somewhat underwhelming.  On travelling to the wonderful Jack Studio Theatre, out of the corner of my eye I spotted two black and white birds perched on a fence. Being the superstitious fool that I am, I was quick to salute the mystical magpies and remind myself of the rhyme – “one for sorrow, two for joy…”. Like the Thane of Cawdor, I too am quite a superstitious individual. You would never hear me speaking the name Macbeth&hellip;

A bit of Shakespeare that is well worth a watch, even if just to hear the verse in Scottish. (Note: not all cast use a Scottish accent)

On travelling to the wonderful Jack Studio Theatre, out of the corner of my eye I spotted two black and white birds perched on a fence. Being the superstitious fool that I am, I was quick to salute the mystical magpies and remind myself of the rhyme – “one for sorrow, two for joy…”. Like the Thane of Cawdor, I too am quite a superstitious individual. You would never hear me speaking the name Macbeth in a theatre for instance; who knows what bad luck would be bestowed upon oneself. But what did this mean? Was it a sign of what was to come? Was it foreshadowing the success of the play?

Macbeth is probably one of Shakespeare’s most famous plays and arguably one of the hardest to stage, with many a murder on its pages. It is set in Scotland where a bloody battle has just been won. Macbeth, a worthy warrior, is on his way back home when he comes across three strange beings who forecast his future. Hot with ambition, he yearns to be king and so with the help of his fiendish wife plots to murder King Duncan, and thus take his place on the thrown. But with blood on the royal couple’s hands, and a fight to stay at the top, the two gradually spiral out of control.

The AC Group’s production is performed by a young cast but do not fooled, there is some exceptional talent in it. Nell Hardy is brilliant as one of the three witches and the vengeful MacDuff. Her performance on learning of the death of MacDuff’s wife and children is incredibly emotional and flawlessly performed. Amelia Clay also puts on a top performance as suitably-red-top-dressed Lady Macbeth. But it is William Ross-Fawcett, playing the title role, who steals the show.

Macbeth is a character that all actors would no doubt kill (pun intended) to play and it isn’t an easy one to carry off, not well anyway. Yet Ross-Fawcett is fantastic as he slowly descends into cunning, ill-fated madness. His soliloquies are quite exceptional, drawing you deeper and deeper into Macbeth’s mutilated mind. It was also a real privilege to hear the Macbeths speak to one another in Scottish accents; it heightened the intensity and was mesmerising to listen to the Bard’s words in the accent he had intended us to hear them in.

My only qualms about this piece are that some parts are not executed as well as they could have been. Banquo’s ghost scene for example is a little underwhelming. Despite the eerie curtains and the sinister lighting – so well used throughout the rest of the piece – the design felt somewhat underused in this scene. Banquo’s ghost was left looking slightly awkward with just a scabby bandage wrapped around her neck. The final fight scene is also a little disappointing with a blood-stained shroud representing the end of Macbeth.

These points are however overshadowed by the rest of this brilliant production. Sound by Jack Barton is wonderfully spooky and tension-filled. Ben Jacobs’ lighting design further effectively creates the unnerving atmosphere that runs throughout this exciting production. Director Thomas Attwood has done a fine job of bringing Shakespeare’s Macbeth to life on the Jack Studio Theatre stage and with Ross-Fawcett’s epic portrayal, it’s definitely worth a watch.

Previous: Sublime, Tristan Bates Theatre – Review
Next: This Joint is Jumpin’, The Other Palace – Review